9 Jan 2023 – President tours scene of riot and orders federal government to take control of policing in capital Brasília as extremists refuse to accept his presidency. Brazilian president Luiz Inácio Lula da Silva has toured the wreckage of his presidential palace after an extraordinary day of political violence in the capital, Brasília, saw thousands of far-right extremists run riot through the country’s democratic institutions in a failed attempt to overthrow his week-old government.

The massed attack by supporters of the ex-president Jair Bolsonaro was a stunning security breach that was immediately compared to the 6 January invasion of the US Capitol by followers of Donald Trump in 2021.

Lula was not in Brasília at the time of the attack but he gave an angry speech blaming Bolsonaro for the chaos and promising that “anyone involved will be punished”.

Calling those who took part in the attacks “vandals, neo-fascists and fanatics”, Lula ordered a federal intervention in the capital, bringing policing under the control of the central government.

“What we are witnessing is a terrorist attack,” the news anchor Erick Bang announced on the GloboNews television network as word of the upheaval spread. “The three buildings have been invaded by coup-mongering terrorists.”

“It was much worse than what happened at the Capitol,” the former supreme court judge Marco Aurélio Mello told the O Globo newspaper on Sunday night after police made at least 300 arrests relating to the attack.

Shocking video footage showed pro-Bolsonaro militants sprinting up the ramp into the Palácio do Planalto, the presidential offices, roaming the building’s corridors and vandalising the nearby supreme court, whose windows had been smashed.

Videos posted on social media showed fires burning inside the congress building. Furniture was broken and tossed around, objects were reportedly stolen in the presidential palace and the supreme court, and in some places sprinklers appeared to be dousing chambers. 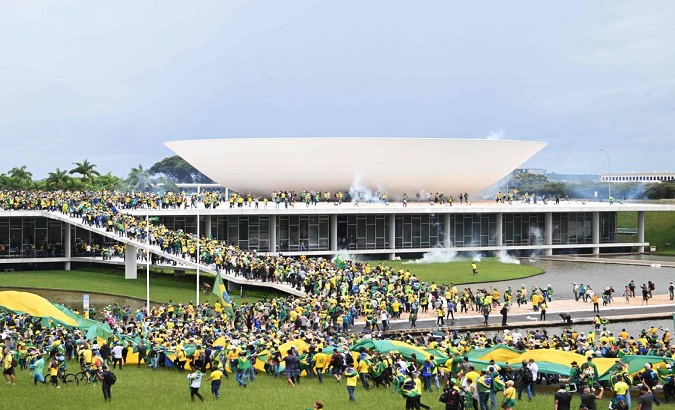 “They are throwing chairs out of the windows,” said another bewildered GloboNews commentator, Eliane Cantanhêde. “They are destroying public buildings.”

Lula, a veteran leftist, was sworn in as Brazil’s new president last Sunday in celebrations attended by hundreds of thousands of Brazilians.

But thousands of pro-Bolsonaro extremists have refused to accept Lula’s narrow victory in October’s election, spending recent weeks camping outside army bases across the country and calling for a military coup.

Bolsonaro, a far-right former army captain whose main international ally was Trump, flew out of Brazil on the eve of Lula’s inauguration and is currently in Florida. He responded to Sunday’s events with a short string of social media posts defending his record in government while saying invasion of public buildings crossed the line.

“Peaceful demonstrations, within the law, form part of democracy,” he wrote on Twitter. “However, depredations and invasions of public buildings like those that happened today, as well as those practiced by the left in 2013 and 2017, are exceptions to the rule.”

Bolsonaro stopped short of condemning the mob outright and instead hit out at Lula’s claims that he was responsible.

“Throughout my mandate, I have always stayed within the four lines of the constitution, respecting and defending laws, democracy, transparency and our sacred freedom. In addition, I reject the baseless accusations attributed to me by the current head of the executive branch in Brazil.”

Military police in Brasília were conspicuous by their absence on Sunday and the mobs faced little opposition as they marched towards the three branches of government.

On Sunday night the supreme court justice Alexandre de Moraes ordered Ibaneis Rocha, the pro-Bolsonaro governor of the federal district, where Brasília is located, to be removed from his post for 90 days amid outrage that authorities had failed to prevent the attack.

De Moraes wrote that the attacks “could only have happened with the acquiescence, or even direct involvement, of public security and intelligence authorities.”

By the end of the afternoon, authorities appeared to have retaken control of some of the buildings, and police said 300 people had been arrested. TV footage showed dozens of people handcuffed and lying on the ground, watched over by law enforcement officers.

Lula’s response came a few hours after a pro-Bolsonaro mob marched 8km from the army headquarters in Brasília towards the heart of Brazilian politics, the Three Powers Plaza, which houses the supreme court, the presidential palace and congress.

The militants – many wearing the yellow and green Brazil flag that became a symbol of Bolsonaro’s far-right movement – broke through police lines at about 3pm and surged on to the ramp leading into the congress building.

Soon after another prominent Lula ally, André Janones, shared footage that showed scores of radicals inside the grounds of the Palácio do Planalto, the presidential offices where last week’s inauguration ceremony was held.

Observers have spent months warning that Bolsonaro hardliners might stage a South American version of the US’s Capitol invasion in the hope of overturning Lula’s win. During his tumultuous four-year administration, Bolsonaro repeatedly hinted that a military takeover might be in the works and battled to undermine Brazil’s internationally respected electronic voting system.

“Bolsonaro and his team have looked very closely at what happened on January 6 trying to understand why it was that a sitting president failed in his effort to overturn election results,” the former US ambassador to Brazil, Thomas Shannon, told the Guardian before last year’s election.

The weeks leading up to Lula’s 1 January inauguration saw two clear signals of the violence that was to come.

On 13 December, radicals tried to storm the federal police headquarters in Brasília, torching buses and cars as they moved through the city. Just before Christmas another extremist Bolsonaro supporter was arrested and allegedly confessed to a plot to bomb Brasília’s airport in an attempt to spark turmoil that might justify a military coup.