US Threatens African Countries, Demanding to End Relations with Russia 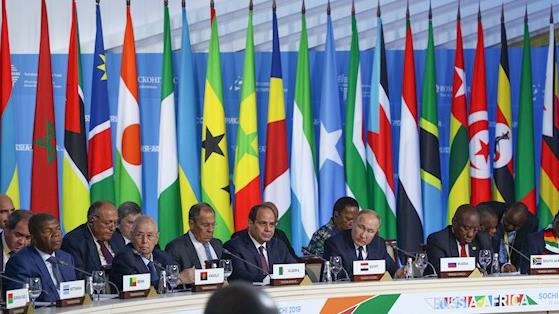 11 Jan 2023 – Even with the emerging countries several times making clear their solid position of not supporting the sanctions against Russia, the US remains with an absolutely interventionist foreign policy, threatening the states that maintain relations with “blacklisted” nations. Now, South African authorities report that they are being blackmailed by the US because of business that the country maintains with Moscow. More than that, it is reported that across the African continent there are many cases of anti-Russian intimidation, which reveals the high levels of interventionism on the part of Washington.

On January 9th, the Wall Street Journal (WSJ) reported that relations between US and South Africa are tense. The reason for the diplomatic instability would be the fact that last month a South African naval base received a Russian cargo ship sanctioned by Washington, with no public information about the contents inside the vessel. US authorities demand that their African counterparts report details on the cargo contained on the ship, demanding a kind of “justification” for the fact that the country maintains relations with sanctioned Russian companies.

“[Washington is] concerned by the support the South African Armed Forces provided to the ‘Lady R’ (…) There is no publicly available information on the source of the containers that were loaded onto the ‘Lady R’ “, a senior US official told the WSJ – “Lady R” being the term used to refer to the Russian ship.

The lack of information about the ship’s contents makes it difficult to ascertain whether it was bringing Russian products to Africa or transporting African products to Russia. Obviously, the greatest fear of US officials is that Russia and South Africa are strengthening ties of military cooperation. In a statement issued by the South African Minister of Defense Thandi Modise it was said that “whatever contents this vessel was getting were ordered long before Covid”.

Darren Olivier, a consultant at African Defense Review, commented to the WSJ that “South Africa’s defense industry does not generally produce armaments and complete systems that are used by the Russian military”. He claims it is possible that Russia eventually becomes interested in some South African military products such as optics and guidance systems for combat drones, but this does not appear to be the case about the latest “Lady R” expedition.

Olivier believes that most likely the ship was carrying to South Africa some tons of Russian ammunition that had previously been ordered by Pretoria. In 2020, South Africa signed a contract with Russian suppliers valued at more than 500,000 dollars to acquire ammunition. Considering the information that the ship’s contents referred to contracts signed “before Covid”, as the minister said, so it is likely that this was the cargo in December.

Commenting on the topic, Minister Modisa also expressed dissatisfaction with the way in which the US operates its relations with South Africa and other states on the continent. According to her, Washington “threatens Africa, not just South Africa, of having anything that is even smelling of Russia”. Indeed, the US does not seem willing to respect the sovereign foreign policy of African nations, simply ignoring the fact that there is real desire for cooperation with Russia on the part of these states.

In the specific case of South Africa, the American posture is even more serious, since Pretoria and Moscow are both members of the BRICS, maintaining a fundamental strategic alliance that cannot be vulnerable to the decisions taken by the American politicians. The posture of US diplomats in Pretoria in the “Lady R” case shows how Washington still conducts its diplomacy based on coercion. American officials called on the South African authorities to expose the ship’s cargo, simply because in Washington such ship is “blacklisted”.

In fact, American legislation itself allows this type of anti-diplomatic maneuver. There is a law in the US that permits the country to impose sanctions on any entities around the world that contract the services of blacklisted ships, which explains Pretoria’s stance on not disclosing details on the matter. The US wants to find out which South African entities are involved in the transaction in order to impose sanctions on them, which is why the South African state correctly omits the data to protect its domestic entities.

This shows how threat and coercion are not efficient diplomatic mechanisms. The American authorities seem connected to a belligerent logic according to which it is possible to obtain any kind of advantage through violence and blackmail. But the contemporary world goes in another direction. There is a process of transition towards geopolitical multipolarity that cannot be stopped through blackmail.

South Africa did not comply with the anti-Moscow sanctions because they were against its strategic interests. Currently, pragmatism, and not the “need” to please the US, is the parameter that guides the decisions of the states.