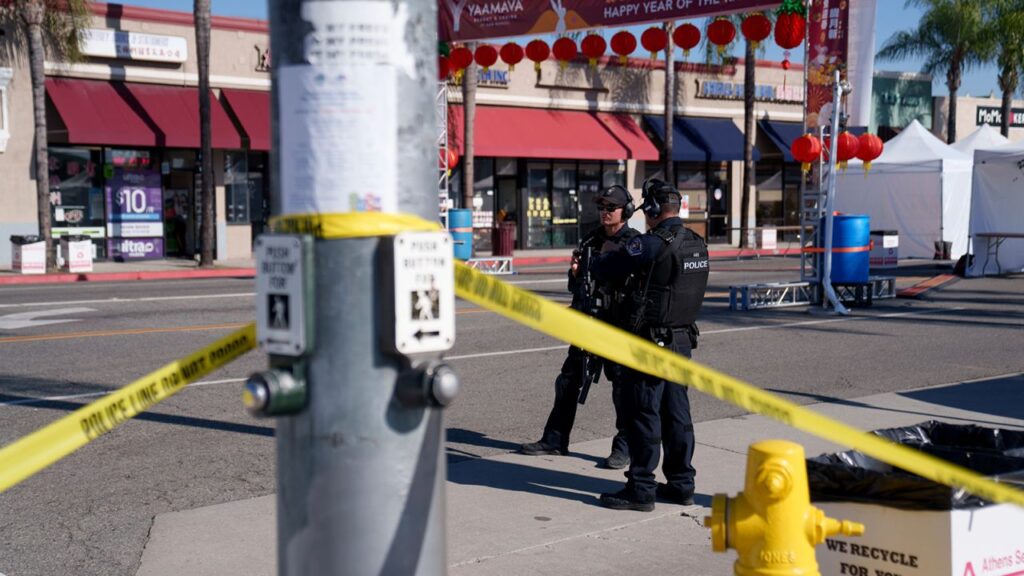 Police officers stand guard near the scene of the deadly shooting in Monterey Park, California.

23 Jan 2023 – At least 10 people are dead and another 10 injured after a mass shooting in Monterey Park, California, Saturday [21 Jan] night, that happened as the city’s large Asian American community was celebrating Lunar New Year weekend.

A lot remains unknown, but the scenes of agony and horror are increasingly all too familiar in America. In fact, Saturday’s mass shooting joins a staggering *32* others from just the first three weeks of 2023, per the Gun Violence Archive.

Communities from Goshen, California, to Baltimore, Maryland, are reeling while others brace for the possibility of such violence in their own backyards.

“A time of a cultural celebration … and yet another community has been torn apart by senseless gun violence,” Vice President Kamala Harris told a crowd in Tallahassee, Florida, on Sunday. “All of us in this room and in our country understand this violence must stop.”

But how that happens with a divided Congress, vastly different policy prescriptions, and a deeply entrenched gun culture remains to be seen.

It’s bad however you look at it.

Firearm injuries are now the leading cause of death among people younger than 24 in the United States, according to a study published in the December 2022 edition of Pediatrics, the journal of the American Academy of Pediatrics.

From 2015 through 2020, there were at least 2,070 unintentional shootings by children under 18 in the US, according to a report from Everytown. Those shootings resulted in 765 deaths and 1,366 injuries.

An unequal burden. A study published late last year in JAMA Network Open analyzed firearm deaths over the past three decades – a total of more than 1 million lives lost since 1990.

The researchers found that firearm mortality rates increased for most demographic groups in recent years – especially during the Covid-19 pandemic – but vast disparities persisted. The homicide rate among young Black men – 142 homicide deaths for every 100,000 Black men ages 20 to 24 – was nearly 10 times higher than the overall firearm death rate in the US in 2021.

Americans are armed like few others. There are about 393 million privately owned firearms in the US, according to an estimate by the Switzerland-based Small Arms Survey. That’s 120 guns for every 100 Americans.

While the exact number of civilian-owned firearms is difficult to calculate due to a variety of factors – including unregistered weapons, the illegal trade and global conflict – no other nation has more civilian guns than people.

About 45% of US adults say they live in a household with a gun, according to an October 2022 Gallup survey.

How should we define ‘mass shooting’?

The Gun Violence Archive, like CNN, defines a mass shooting as one in which at least four people are shot, excluding the shooter.

But what defines a mass shooting depends on whom you ask.

The Federal Bureau of Investigation, for example, has cited 2012 legislation defining a “mass killing” as “three or more killings in a single incident.”

Mass Shooting Tracker, a crowd-sourced data base, defines mass shooting as “a single outburst of violence in which four or more people are shot.”

Everytown For Gun Safety defines a mass shooting as any incident in which four or more people are shot and killed, excluding the shooter.

The lack of a firm definition doesn’t help in addressing the problem. And the squishiness opens up room to interpret the data differently. The conservative Daily Caller, for example, has cited a definition of “public mass shootings” included in a 2013 Congressional Research Service report that is so narrow it only identified 78 of them between 1983 and 2012.

A 2019 research paper published in Injury Epidemiology put a spotlight on this issue: “Gun Violence Archive recorded the most mass shooting incidents at 346 incidents in 2017, while Mother Jones only recorded 11 cases.”

The authors’ conclusion? “Establishing a definition for ‘mass shooting’ will improve the quality of analyses being completed. This could lead to an improvement in not only public awareness and understanding of mass shooting facts, but also arguments to policymakers for legislation that could alleviate the burden that mass shootings place on society.”

It certainly doesn’t have to be this way. Countries that have introduced laws to reduce gun-related deaths have achieved significant changes, a previous, in-depth CNN analysis found:

Australia. Less than two weeks after Australia’s worst mass shooting, the federal government implemented a new program, banning rapid-fire rifles and shotguns, and unifying gun owner licensing and registrations across the country. In the next 10 years gun deaths in Australia fell by more than 50%.

A 2010 study found the government’s 1997 buyback program – part of the overall reform – led to an average drop in firearm suicide rates of 74% in the five years that followed.

South Africa. Gun-related deaths almost halved over a 10-year-period after new gun legislation, the Firearms Control Act of 2000, went into force in July 2004. The new laws made it much more difficult to obtain a firearm.

New Zealand. Gun laws were swiftly amended after the 2019 Christchurch mosque shootings. Just 24 hours after the attack, in which 51 people were killed, Prime Minister Jacinda Ardern announced that the law would change.

Britain tightened its gun laws and banned most private handgun ownership after a mass shooting in 1996, a move that saw gun deaths drop by almost a quarter over a decade.

But America’s gun culture is a global outlier. For now, the deadly cycle of violence seems destined to continue.