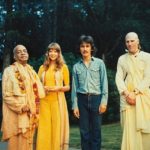 The Answer Is in the End: George Harrison, a Prophet for Our Time
Ben Jolliffe | Resurgence Magazine – TRANSCEND Media Service, 25 Nov 2019

George Harrison died on 29 November 2001 at the age of fifty-eight. After meeting A.C. Bhaktivedanta Swami Prabhupada, founder of the International Society for Krishna Consciousness, of which he became an active participant, Harrison turned his devotion to Lord Krishna in 1969.

THE ANSWER’S IN THE END: GEORGE HARRISON-A PROPHET FOR OUR TIME
Ben Jolliffe – Resurgence magazine, 25 Nov 2009

George Harrison died on 30th November 2001 at the age of fifty-eight. THE POP STAR and the prophet are rare bedfellows – but with the simple wisdom of his lyrics and the melodic sweetness of his slide guitar, George Harrison brought them together in a marriage of great inspiration. Rock ‘n’ roll’s most famous heroes […]