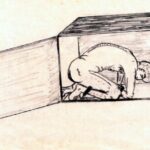 What the C.I.A.’s Torture Program Looked Like to the Tortured
Carol Rosenberg – The New York Times, 9 Dec 2019

4 Dec 2019 – Drawings done in captivity by the first prisoner known to undergo “enhanced interrogation” in Guantanamo portray his account of what happened to him in vivid and disturbing ways.

U.S. military medical providers counted 102 Guantanamo prisoners as hunger strikers on Thursday [16 May 2013], the first increase after three weeks when the number seemed to plateau at 100. Navy medical workers were tube-feeding 30 of the hunger strikers, said Army Lt. Col. Samuel House. Three were hospitalized, but none had “life-threatening conditions,” he said.