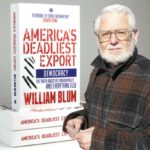 William Blum died in Virginia early this morning on December 9, 2018 after falling in his Washington D.C. apartment and sustaining serious wounds 65 days ago. Blum left the State Department in 1967 and became a founder and editor of the Washington Free Press, the first “alternative” newspaper in the capital. In 1969, he wrote and published an exposé of the CIA in which were revealed the names and addresses of more than 200 CIA employees.