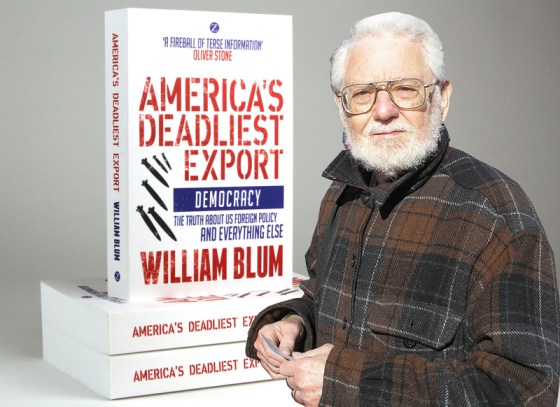 William Blum died in Virginia early this morning on December 9, 2018. He was surrounded by friends and family after falling in his Washington D.C. apartment and sustaining serious wounds 65 days ago. He was 85 years old.

Bill was born March 6, 1933 at Beth Moses Hospital in Brooklyn, N.Y. and became an American author, historian, and critic of United States foreign policy. He worked in a computer-related position at the United States Department of State in the mid-1960s. Initially an anti-communist with dreams of becoming a Foreign Service officer, he became disillusioned by the Vietnam War.

Blum left the State Department in 1967 and became a founder and editor of the Washington Free Press, the first “alternative” newspaper in the capital. In 1969, he wrote and published an exposé of the CIA in which were revealed the names and addresses of more than 200 CIA employees. He worked as freelance journalist in the United States, Europe and South America. In 1972–1973 Blum worked as a journalist in Chile where he reported on the Allende government’s “socialist experiment.” Its overthrow in a CIA designed coup instilled in him a personal involvement and an even more heightened interest in what his government was doing in various corners of the world.

In London in the mid-1970s, Blum collaborated with ex-CIA officer Philip Agee and his associates “on their project of exposing CIA personnel and their misdeeds.” The late 1980s found Mr. Blum living in Los Angeles pursuing a career as a screenwriter. Unfortunately, his screenplays all had two (if not three) strikes against them because they dealt with those things which makes grown men run away screaming in Hollywood: ideas and issues.

For the rest of his long life, Bill lived in Washington, D.C. ineligible to renew his lapsed security clearance because of his political views. Instead, he accepted many speaking engagements on college campuses around the world. Bill was a distinguished member of CovertAction Magazine and the Advisory Board, and worked on staff for many years with CovertAction Quarterly and CovertAction Information Bulletin. His articles can be found in our archives; See issues numbers 33, 46, 47, 51, 53, 66, and 77. Blum went on to write numerous books on U.S. foreign policy and became the go-to source on U.S. intervention.

His book Killing Hope: U.S. Military and CIA Interventions Since World War II–first published in 1995 and updated in 2004–has received international acclaim.  Noam Chomsky called it “far and away the best book on the topic.”

In 1999, he was a recipient of Project Censored’s awards for “exemplary journalism” for writing one of the top ten censored stories of 1998–an article on how, in the 1980s, the United States gave Iraq the material to develop a chemical and biological warfare capability.

Blum is also the author of America’s Deadliest Export: Democracy – The Truth About U.S. Foreign Policy and Everything Else (2013), Rogue State: A Guide to the World’s Only Superpower (updated edition 2005), West-Bloc Dissident: A Cold War Memoir (2002), and Freeing the World to Death: Essays on the American Empire (2004).  His books have been translated into more than 15 languages.

During 2002-2003, Blum was a regular columnist for the magazine The Ecologist, which is published in London and distributed globally. In January 2006, a tape from Osama bin Laden stated that “it would be useful” for Americans to read Rogue State, apparently to gain a better understanding of the enemy. Blum found his public speaking engagements abruptly ending.

Bill is also well-known for his highly popular and well-researched blog called “The Anti-Empire Report” published from April 1 2003 to September 20, 2018.

Following his 65-day fight to live after his devastating fall in his apartment on October 4th, Bill died this morning at 2:20 a.m. When his condition worsened several days ago, he was transferred from the Virginia Hospital Center to the Caring Care Hospice about one mile from the hospital. His son, Alexander S. Blum, flew in from Germany to be alongside friends and family. His immediate cause of death was kidney failure—combined with the various wounds on his body.

His last speaking engagement was this past summer as the keynote speaker at the Left Forum panel entitled “CovertAction: Persistent U.S. Attacks Against ‘Democracy and Freedom,’ Past and Present.” Hosted by CovertAction Magazine, Bill–speaking with Louis Wolf and others–entitled his presentation “American Exceptionalism: The Naked Truth.” He started his talk by acknowledging that…

“We can all agree I think that US foreign policy must be changed and that to achieve that the mind – not to mention the heart and soul – of the American public must be changed.”

And in his iconic, wry humor—coupled with chuckles in the audience—Bill stated:

See the full video of the panel here. His talk starts at 44 min and 48 seconds into the video.

Bill spent his life documenting the atrocities of the U.S. government and his contributions are deeply enlightening; without a doubt Bill has offered us ever lasting resources that will continue to inform generations to come. 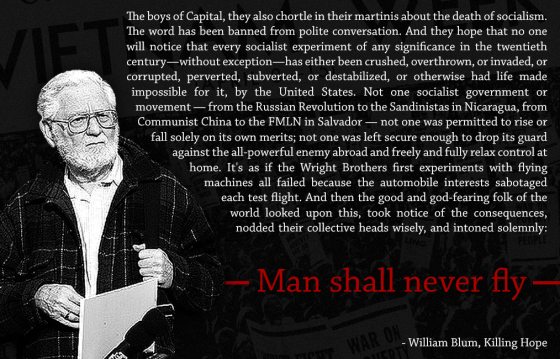 William Blum was an author, historian, and renowned critic of U.S. foreign policy. He authored Killing Hope: U.S. Military and CIA Interventions Since World War II and Rogue State: A Guide to the World’s Only Superpower, among others. He left the State Department in 1967, abandoning his aspiration of becoming a Foreign Service Officer, because of his opposition to what the United States was doing in Vietnam. He then became one of the founders and editors of the Washington Free Press, the first “alternative” newspaper in the capital. Mr. Blum was a freelance journalist in the United States, Europe and South America.  His stay in Chile in 1972-3, writing about the Allende government’s “socialist experiment” and its tragic overthrow in a CIA-designed coup, instilled in him a personal involvement and an even more heightened interest in what his government was doing in various parts of the world.