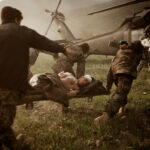 The Afghanistan Papers–>A Secret History of the War: At War with the Truth
Craig Whitlock – The Washington Post, 16 Dec 2019

9 Dec 2019 – U.S. officials constantly said they were making progress. They were not, and they knew it, an exclusive Post investigation found. A confidential trove of government documents reveals that senior U.S. officials failed to tell the truth about the war in Afghanistan throughout the 18-year campaign, making rosy pronouncements they knew to be false and hiding unmistakable evidence the war had become unwinnable.

The U.S. military is shifting its huge fleet of unmanned aircraft to other hot spots around the world. This next phase of drone warfare is focused more on spying than killing and will extend the Pentagon’s robust surveillance networks far beyond traditional, declared combat zones.

29 Jan 2013 – The U.S. military is planning a new drone base in Africa that would expand its surveillance in northern Mali, a development that would escalate American involvement in a fast-spreading conflict. Two Obama administration officials said military planners are eyeing the West African country of Niger as a base for unarmed Predator drones, which would greatly boost U.S. spy missions in the region.

The Obama administration is assembling a constellation of secret drone bases for counterterrorism operations in the Horn of Africa and the Arabian Peninsula as part of a newly aggressive campaign to attack al-Qaeda affiliates in Somalia and Yemen, U.S. officials said.

With Air Force’s New Drone, ‘We Can See Everything’
Ellen Nakashima and Craig Whitlock – The Washington Post, 3 Jan 2011

The hunger for these high-tech tools was evident at the conference, where officials told several thousand industry and intelligence officials they had to move “at the speed of war.” Cartwright pressed for solutions, even partial ones, in a year or less.

High-Ranking U.S. Officials Among Targets of Inquiries Spanish judges are boldly declaring their authority to prosecute high-ranking government officials in the United States, China and Israel, among other places, delighting human rights activists but enraging officials in the countries they target and triggering a political backlash in a nation uncomfortable acting as the world’s conscience. […]