The Afghanistan Papers–>A Secret History of the War: At War with the Truth

9 Dec 2019 – U.S. officials constantly said they were making progress. They were not, and they knew it, an exclusive Post investigation found.

A confidential trove of government documents obtained by The Washington Post reveals that senior U.S. officials failed to tell the truth about the war in Afghanistan throughout the 18-year campaign, making rosy pronouncements they knew to be false and hiding unmistakable evidence the war had become unwinnable.

The documents were generated by a federal project examining the root failures of the longest armed conflict in U.S. history. They include more than 2,000 pages of previously unpublished notes of interviews with people who played a direct role in the war, from generals and diplomats to aid workers and Afghan officials.

The U.S. government tried to shield the identities of the vast majority of those interviewed for the project and conceal nearly all of their remarks. The Post won release of the documents under the Freedom of Information Act after a three-year legal battle.

In the interviews, more than 400 insiders offered unrestrained criticism of what went wrong in Afghanistan and how the United States became mired in nearly two decades of warfare.

With a bluntness rarely expressed in public, the interviews lay bare pent-up complaints, frustrations and confessions, along with second-guessing and backbiting. 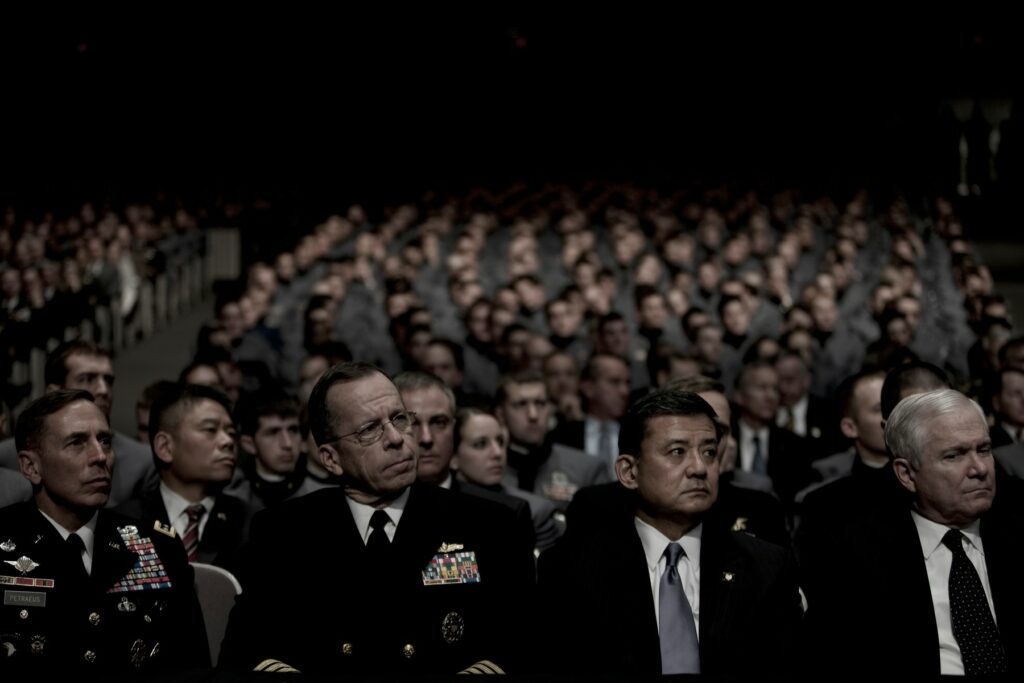 “We were devoid of a fundamental understanding of Afghanistan — we didn’t know what we were doing,” Douglas Lute, a three-star Army general who served as the White House’s Afghan war czar during the Bush and Obama administrations, told government interviewers in 2015. He added: “What are we trying to do here? We didn’t have the foggiest notion of what we were undertaking.”

“If the American people knew the magnitude of this dysfunction . . . 2,400 lives lost,” Lute added, blaming the deaths of U.S. military personnel on bureaucratic breakdowns among Congress, the Pentagon and the State Department. “Who will say this was in vain?” 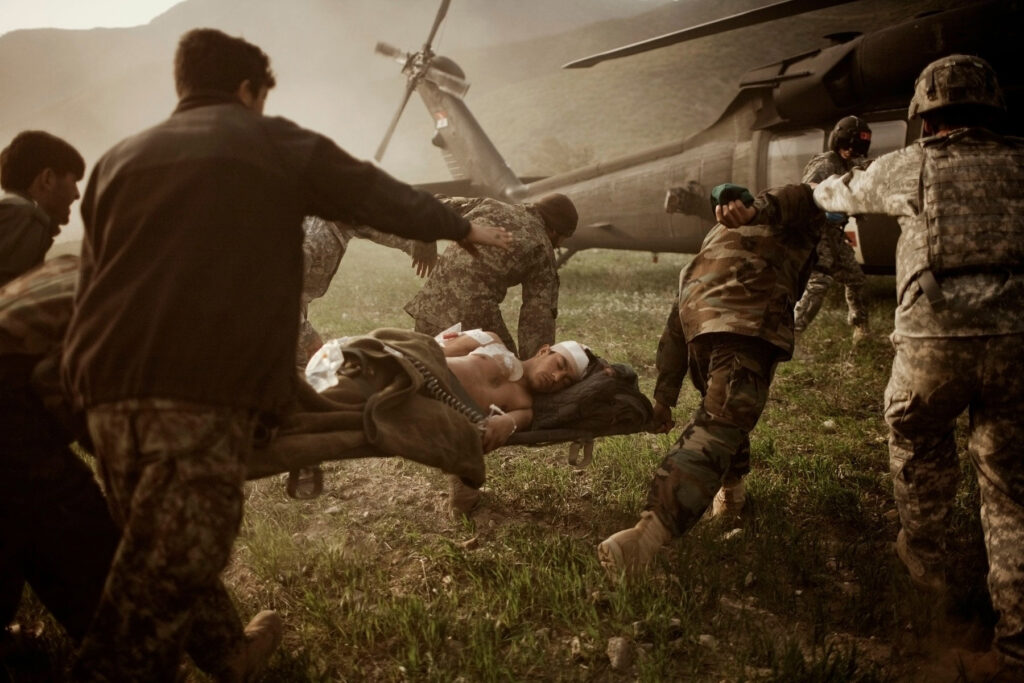 The interviews, through an extensive array of voices, bring into sharp relief the core failings of the war that persist to this day. They underscore how three presidents — George W. Bush, Barack Obama and Donald Trump — and their military commanders have been unable to deliver on their promises to prevail in Afghanistan. 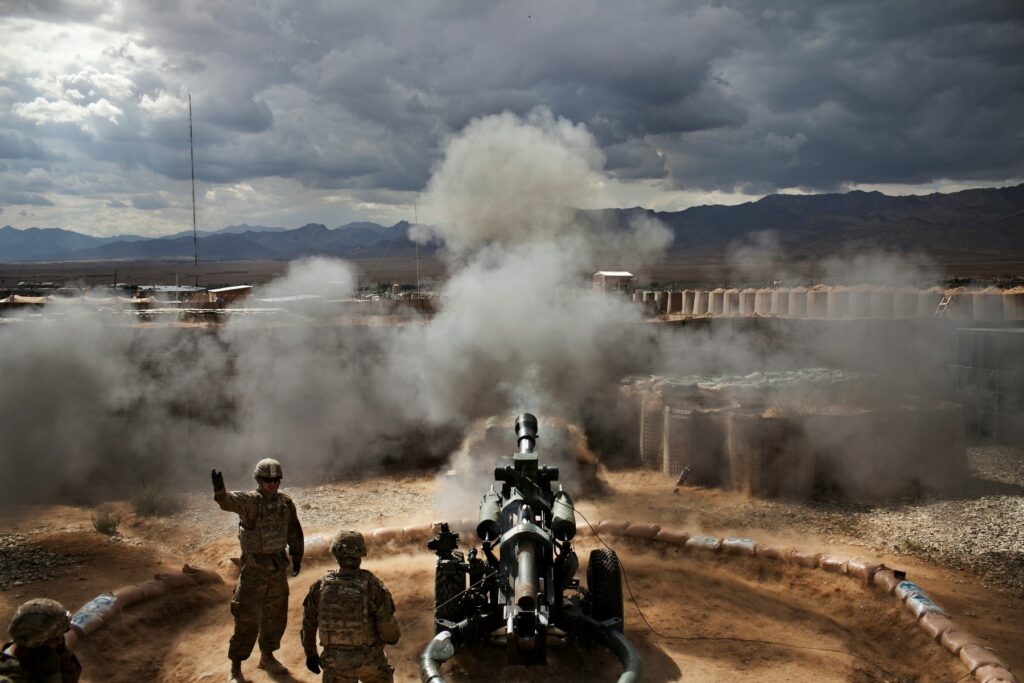 A joint artillery training session at a combat outpost in Jaghatu, in Wardak province, in 2012. (Lorenzo Tugnoli for The Washington Post)

With most speaking on the assumption that their remarks would not become public, U.S. officials acknowledged that their warfighting strategies were fatally flawed and that Washington wasted enormous sums of money trying to remake Afghanistan into a modern nation.

The U.S. government has not carried out a comprehensive accounting of how much it has spent on the war in Afghanistan, but the costs are staggering.

Since 2001, the Defense Department, State Department and U.S. Agency for International Development have spent or appropriated between $934 billion and $978 billion, according to an inflation-adjusted estimate calculated by Neta Crawford, a political science professor and co-director of the Costs of War Project at Brown University.

Those figures do not include money spent by other agencies such as the CIA and the Department of Veterans Affairs, which is responsible for medical care for wounded veterans.

“What did we get for this $1 trillion effort? Was it worth $1 trillion?” Jeffrey Eggers, a retired Navy SEAL and White House staffer for Bush and Obama, told government interviewers. He added, “After the killing of Osama bin Laden, I said that Osama was probably laughing in his watery grave considering how much we have spent on Afghanistan.” 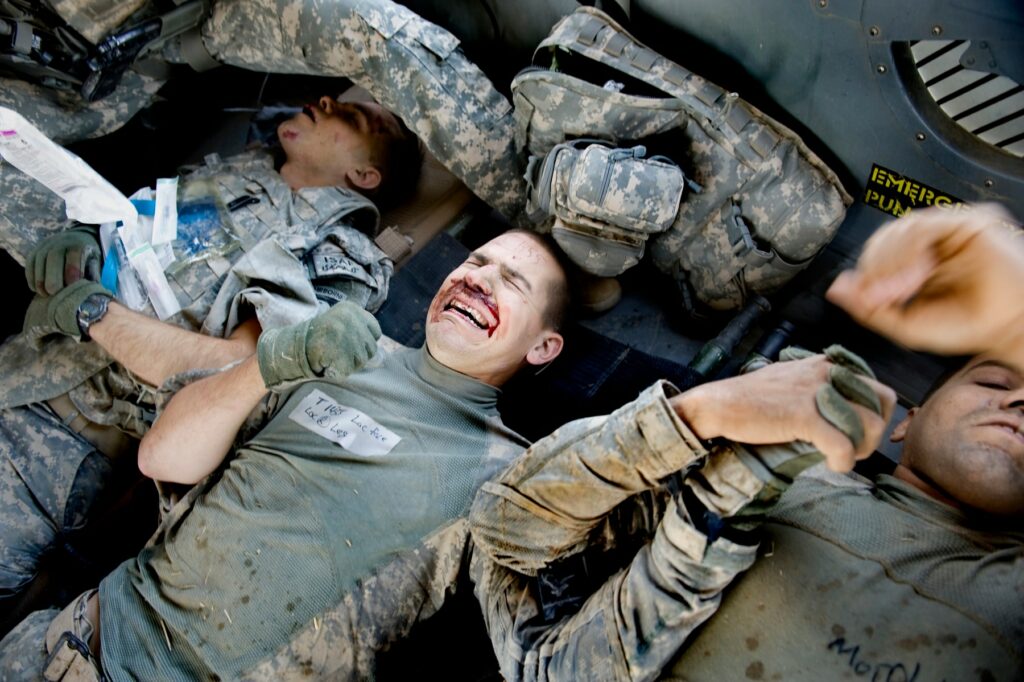 U.S. soldiers wounded by an IED are transported by medevac in Kandahar province in 2010. (Linda Davidson/The Washington Post)

The documents also contradict a long chorus of public statements from U.S. presidents, military commanders and diplomats who assured Americans year after year that they were making progress in Afghanistan and the war was worth fighting.

Several of those interviewed described explicit and sustained efforts by the U.S. government to deliberately mislead the public. They said it was common at military headquarters in Kabul — and at the White House — to distort statistics to make it appear the United States was winning the war when that was not the case.

“Every data point was altered to present the best picture possible,” Bob Crowley, an Army colonel who served as a senior counterinsurgency adviser to U.S. military commanders in 2013 and 2014, told government interviewers. “Surveys, for instance, were totally unreliable but reinforced that everything we were doing was right and we became a self-licking ice cream cone.” 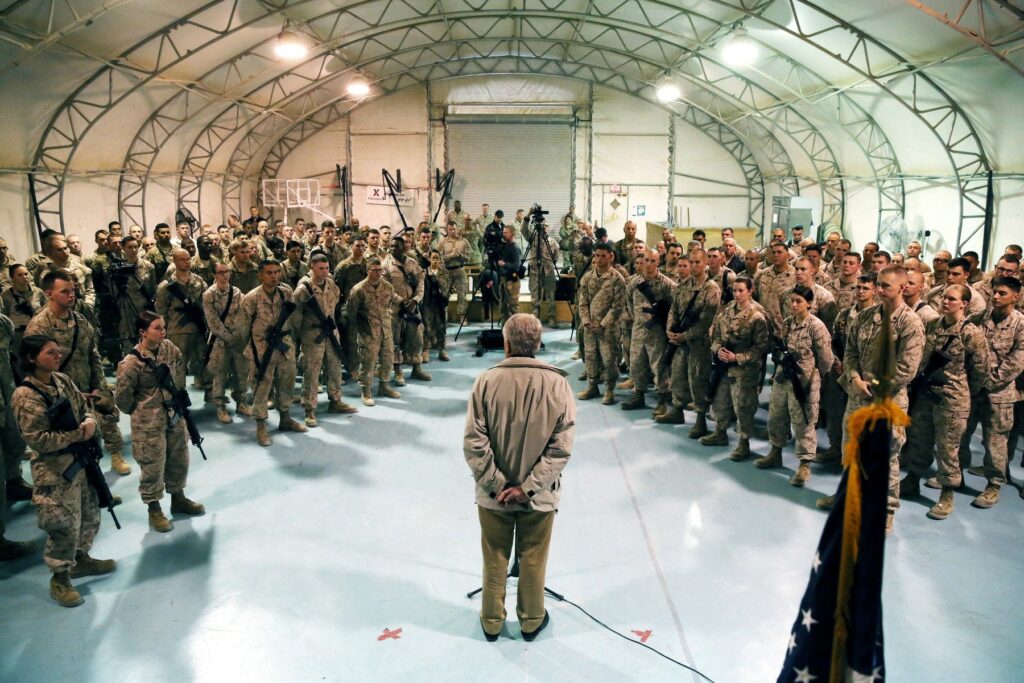 John Sopko, the head of the federal agency that conducted the interviews, acknowledged to The Post that the documents show “the American people have constantly been lied to.”

The interviews are the byproduct of a project led by Sopko’s agency, the Office of the Special Inspector General for Afghanistan Reconstruction. Known as SIGAR, the agency was created by Congress in 2008 to investigate waste and fraud in the war zone.

In 2014, at Sopko’s direction, SIGAR departed from its usual mission of performing audits and launched a side venture. Titled “Lessons Learned,” the $11 million project was meant to diagnose policy failures in Afghanistan so the United States would not repeat the mistakes the next time it invaded a country or tried to rebuild a shattered one.

The Lessons Learned staff interviewed more than 600 people with firsthand experience in the war. Most were Americans, but SIGAR analysts also traveled to London, Brussels and Berlin to interview NATO allies. In addition, they interviewed about 20 Afghan officials, discussing reconstruction and development programs.

Drawing partly on the interviews, as well as other government records and statistics, SIGAR has published seven Lessons Learned reports since 2016 that highlight problems in Afghanistan and recommend changes to stabilize the country.

But the reports, written in dense bureaucratic prose and focused on an alphabet soup of government initiatives, left out the harshest and most frank criticisms from the interviews.

“We found the stabilization strategy and the programs used to achieve it were not properly tailored to the Afghan context, and successes in stabilizing Afghan districts rarely lasted longer than the physical presence of coalition troops and civilians,” read the introduction to one report released in May 2018. 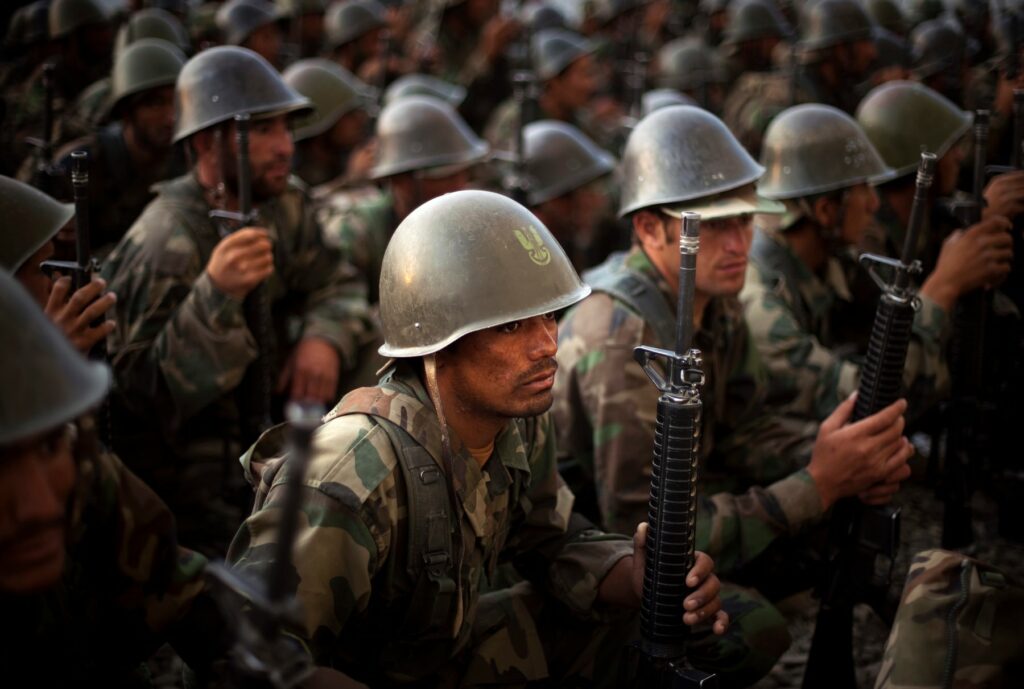 The reports also omitted the names of more than 90 percent of the people who were interviewed for the project. While a few officials agreed to speak on the record to SIGAR, the agency said it promised anonymity to everyone else it interviewed to avoid controversy over politically sensitive matters.

Under the Freedom of Information Act, The Post began seeking Lessons Learned interview records in August 2016. SIGAR refused, arguing that the documents were privileged and that the public had no right to see them.

The Post had to sue SIGAR in federal court — twice — to compel it to release the documents.

What they said in public:

“The history of military conflict in Afghanistan [has] been one of initial success, followed by long years of floundering and ultimate failure. We’re not going to repeat that mistake.”

— President George W. Bush, in a speech at the Virginia Military Institute

“The days of providing a blank check are over. . . . It must be clear that Afghans will have to take responsibility for their security and that America has no interest in fighting an endless war in Afghanistan.”

— President Barack Obama, in a speech at the U.S. Military Academy at West Point, N.Y.

“This army and this police force have been very, very effective in combat against the insurgents every single day. And I think that’s an important story to be told across the board.”

— Then-Army Lt. Gen. Mark A. Milley, praising the Afghan security forces during a press briefing from Kabul. Milley is now a four-star general and chairman of the Joint Chiefs of Staff.

Interviews and memos – Explore the documents

Key insiders speak bluntly about the failures of the longest conflict in U.S. history

The fight for the documents – About the investigation

It took three years and two federal lawsuits for The Post to pry loose 2,000 pages of interview records

Part 1 – At war with the truth

U.S. officials constantly said they were making progress. They were not, and they knew it.

Part 2 – Stranded without a strategy

Bush and Obama had polar-opposite plans to win the war. Both were destined to fail.

Despite vows the U.S. wouldn’t get mired in “nation-building,” it has wasted billions doing just that

The U.S. flooded the country with money — then turned a blind eye to the graft it fueled

Afghan security forces, despite years of training, were dogged by incompetence and corruption

The U.S. war on drugs in Afghanistan has imploded at nearly every turn

Responses to The Post from people named in The Afghanistan Papers