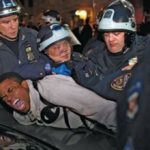 8 Jan 2018 – Trump’s self-righteous claims to defend the right to protest in Iran are sheer hypocrisy. The first act of his administration was a police crackdown against people who protested his inauguration day. Police deployed weapons on at least 191 occasions, fired 74 sting ball grenades, a total of 230 people were arrested. The first round of trials collapsed late last year, with the jury acquitting all of the defendants. One hundred and eighty-eight defendants still await trial, many facing up to 50 years in prison.