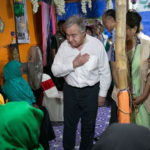 27 Feb 2019 – The UN has launched an inquiry into its conduct in Myanmar over the past decade, where it has been accused of ignoring warning signs of escalating violence prior to an alleged genocide of the Rohingya minority.

Exclusive: images appear to confirm use of the indiscriminate weapon in a conflict which cost the lives of at least 100,000.

When Will the World Act on Myanmar’s Abuses?
Emanuel Stoakes – Al Jazeera, 28 Apr 2014

Most of all, highly credible allegations of crimes against humanity committed against the Rohingya minority underline the country’s enduring backwardness on urgent moral issues. The offences continue to this day, perpetrated as a matter of long-standing state policy.

A UN supervised investigation is needed before more atrocities are committed against the Rohingya Muslims.

The Burmese politician’s visit to Australia will spark praise from politicians – an unhelpful distraction from the extremely serious abuses taking place against Muslims in her homeland.