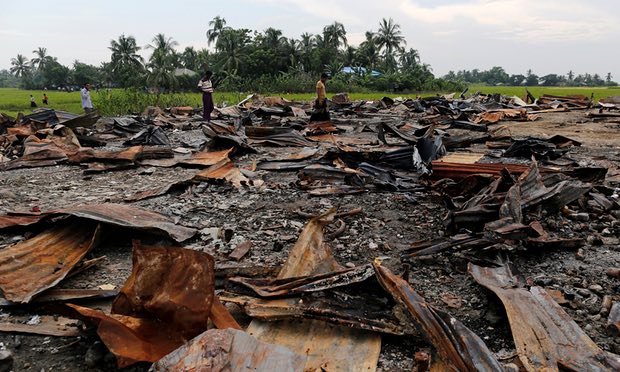 The ruins of a village market that was burned to the ground, near Maungdaw in Myanmar’s Rakhine state.
Photograph: Soe Zeya Tun/Reuters

12 May 2017 – Photographs have emerged that show Rohingya refugees, some of them children, bearing bullet wounds and burn scars apparently sustained during a Myanmar army crackdown.

The new evidence, documented by humanitarian agencies and rights organisations, adds credence to claims that Myanmar’s military committed atrocities against ethnic Rohingya communities during a counterinsurgency campaign that ended this year.

The material surfaced after Aung San Suu Kyi, Myanmar’s de facto civilian leader, told journalists during a visit to the EU last week she did not support a fact-finding mission into alleged abuses against the Rohingya. The UN human rights council mandated an inquiry in a March resolution.

Myanmar’s military and parts of the police force subsequently undertook “clearance operations” against the rebels in an area north of Maungdaw, a town close to the border with Bangladesh. 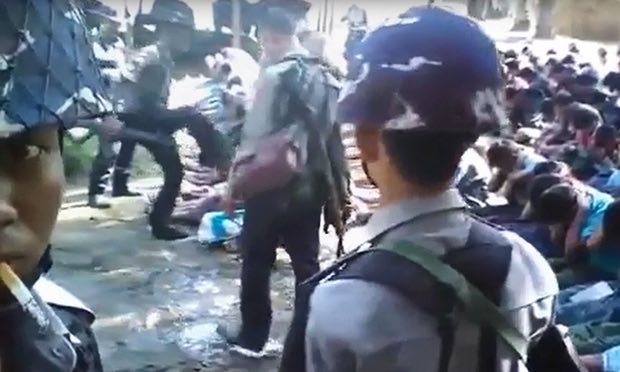 Amnesty International and the Office of the United Nations High Commissioner for Human Rights (OHCHR), the UN’s human rights watchdog, allege that these military sweeps involved widespread and systematic abuse of Rohingya communities, including gang rape, torture and murder. The campaign prompted more than 75,000 Rohingya to flee across the border into the Cox’s Bazar region of Bangladesh and displaced tens of thousands within Myanmar.

Zeid Ra’ad Al Hussein, the UN High Commissioner for Human Rights, and Yanghee Lee, the UN’s special rapporteur on Myanmar, have both claimed Myanmar’s security forces are probably responsible for “crimes against humanity”. Officials from the UN agencies believe more than a thousand Rohingya could have been killed during the crackdown.

Photographs of wounded Rohingya seen by the Guardian appear to strengthen claims that serious abuses occurred. The images support allegations made in a UN report (pdf) that included interviews with hundreds of Rohingya refugees who recently fled Myanmar for Bangladesh.

The report’s authors said that “the army deliberately set fire to houses with families inside” and “in other cases pushed Rohingya into already burning houses”.

The photos were obtained by the Burmese Rohingya Organisation of the UK, a London-based advocacy group, for a forthcoming report.

One image showed a seven-year-old boy with severe blistering on both thighs. The boy and his mother claim the military were responsible for his injuries, which are consistent with burn wounds.

“When the military burnt my house,” said the boy’s mother, “I could not prevent my son from being burnt.”

Another image appeared to show a bullet wound in the leg of a seven-year-old boy. He claims he was injured when the Myanmar military conducted a raid on his village: “I saw the military, and was shot as I fled.”

Other children with serious wounds include a five-year-old girl with a “deep burn” on the skin around her fingers, an injury she received when she had been pushed into fires by the military, according to her mother. Her life was saved by the intervention of a bystander.

“Someone pulled my child from the flames. She was unconscious for three days afterwards,” said the girl’s mother.

Four other organisations claim to have seen similar scarring on the bodies of Rohingya refugees who arrived in Bangladesh during the violence.

A spokesman for the UN High Commissioner for Refugees in Bangladesh said: “It is known to our staff that there were people with such reported injuries as gunshot wounds and burns among those who were seeking assistance from the registered refugees inside the camps. They were generally adults and teenagers. They were referred as quickly as possible for medical attention through NGOs and local hospitals.”

The photographs have prompted renewed calls for Myanmar to cooperate with the UN’s fact-finding mission.

The OHCHR said: “Given the compelling nature of the testimonies collected by various credible groups, if the area remains closed off to investigators it will add to suspicions that the authorities would prefer to let impunity reign than to achieve meaningful accountability.”

The government of Myanmar has not yet responded to requests for comment.

Emanuel Stoakes is a freelance journalist and researcher in the field of human rights and conflict. He has produced work for Al Jazeera, The Daily Telegraph, The Guardian, The Independent, The New Statesman, Vice and Souciant magazine, among others. He is currently based in New Zealand