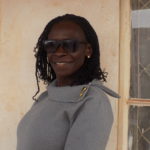 Like many journalists from Northern Uganda, Gloria Lakers peace reporting approach is believed to have partly contributed to the current peace in the region. She holds a Bachelor’s Degree in Journalism and Mass Communication from the Ndejje University in Uganda.

Uganda has a history of conflict and violence. In particular, the strife caused by the Lord’s Resistance Army from 1995 to 2004 made peace efforts necessary. At the time, a strong foundation for peace journalism was laid. Its principles are of lasting relevance in view of unrest in border regions and the refugee population which is growing due to civil war in neighbouring countries.