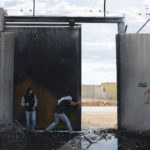 What we desperately need now is to go back to the basics and recognize that guaranteeing Palestinians’ rights is the foundation for any political solution. 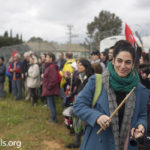 Sixty-three Israeli teenagers have published an open letter to Prime Minister Netanyahu on 28 Dec 2017, declaring their refusal to join the Israeli army due to their opposition to the occupation. “The army carries out a racist government policy that enforces one legal system for Israelis and another for Palestinian in the same territory,” they write.

Every room overlooks the West Bank separation wall, the lobby features a Greek statue choking on teargas, and faux-security cameras dot the corridors. Welcome to “The Walled Off Hotel,” the new Bethlehem-based project from British street artist and enfant terrible Banksy.

Catherine Hall withdraws from $330,000 prize due to Tel Aviv University’s complicity in the occupation of Palestine.

The village that managed to unite the world behind the spirit of nonviolent Palestinian protest marks not only a decade of tear gas, night raids and tragedy, but also of co-resistance and victories in its struggle against settlements, the separation barrier and the occupation.