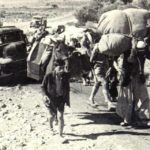 15 Mar 2019 – Zionists taking it upon themselves to try to defend Israel’s crimes against the Palestinian people frequently level the charge that its critics are attempting to “delegitimize” the self-described “Jewish state”. Israel, they counter, has a “right to exist”. But they are mistaken. This is not to single out Israel. There is no such thing as a state’s “right to exist”, period.

Here are ten popular arguments Zionists use to defend Israel’s crimes against the Palestinians and how to answer them effectively.

Myth #8 – God gave the land to the Jews, so the Arabs are the occupiers.
Myth #10 – The U.S. is an honest broker and has sought to bring about peace in the Middle East.

Although Arabs were a majority in Palestine prior to the creation of the state of Israel, there had always been a Jewish population, as well. For the most part, Jewish Palestinians got along with their Arab neighbors. This began to change with the onset of the Zionist movement, because the Zionists rejected the right of the Palestinians to self-determination and wanted Palestine for their own, to create a “Jewish State” in a region where Arabs were the majority and owned most of the land.