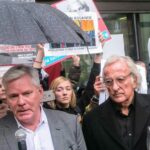 22 Oct 2019 – Pilger told demonstrators: “The whole thing is a grotesque absurdity. There is an extradition law between this country and the United States. It states specifically that someone cannot be extradited if the offences are political… It is not a bit of agitprop, it is not an opinion, they ARE political. All but one charge is based on the 1917 Espionage Act, which was used to jail conscientious objectors during the First World War in the United States.”Pilger concluded: “The source of this is a rogue state—a state that ignores its own laws and international laws and the laws of this country.”