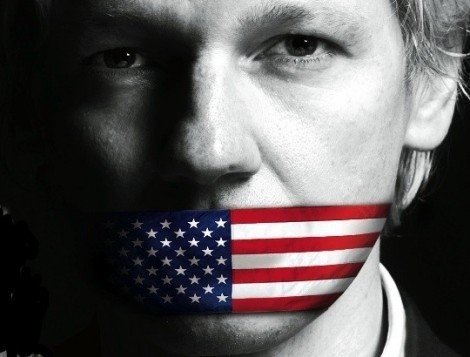 22 Oct 2019 – Imprisoned WikiLeaks publisher Julian Assange appeared at Westminster Magistrates Court in London yesterday—only his third public appearance since UK police seized him from the Ecuadorian embassy on April 11 and imprisoned him in the maximum-security Belmarsh Prison.

Assange, whose exposure of US war crimes in Iraq and Afghanistan garnered worldwide attention and multiple journalism awards in Australia, the United States, Europe and Latin America, arrived at court in a Serco prison van.

Standing in the dock—a room enclosed by reinforced glass panels—Assange mentally paused and appeared to stumble as Judge Vanessa Baraitser asked him to state his name and date of birth.

Baraitser’s vindictiveness towards Assange was clear from the first moments of the hour-and-a-half-long case management hearing. She told Assange’s supporters watching silently in the public gallery that “those causing a disturbance … will be asked to leave.” WikiLeaks’ editor and veteran journalist Kristinn Hrafnsson, investigative journalist John Pilger and former Mayor of London Ken Livingstone were among those seated. 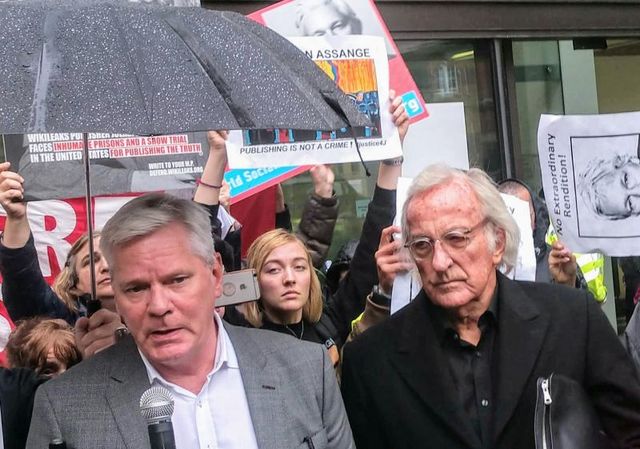 Kristinn Hrafnsson (left) speaking alongside John Pilger after the hearing

James Lewis QC appeared on behalf of the US Department of Justice, stating, “Mr Assange is wanted by the United States government” for “spying” and “aiding and abetting Chelsea Manning” in relation to publication of US classified documents relating to the wars in Iraq and Afghanistan and of US State Department cables. Assange was “not a journalist,” Lewis asserted. His actions were “criminal in both the US and UK,” he claimed, citing the UK’s Official Secrets Act.

Mark Summers QC appeared on behalf of Assange and requested the extradition case against his client be dismissed. The 2003 UK/US extradition treaty expressly provided that “extradition shall not be granted if the offence for which extradition is requested is a political offence.” Summers said the political motivations of his client “are well known.”

Summers continued that the US government’s moves against Assange and former US Army private Chelsea Manning since 2010 were “part of an avowed war on whistleblowers to include investigative journalists and publishers.” Political pressure had been brought to bear by the US state on Ecuador and on Manning, who is now in jail for refusing to testify against Assange. WikiLeaks had been described as a “hostile non-state intelligence agency” and the case had been “reinvigorated” by the Trump administration. The attack on journalists was “unprecedented.”

Summers requested that Baraitser grant a three-month delay to the extradition hearing scheduled for February 25. He pointed to “extraordinary” revelations of illegal US interference against Assange’s legal rights. Legal action taken by Assange against a Spanish security company had exposed the US “actively intruding on privileged discussions” between Assange and his lawyers at the Ecuadorian embassy.

The US state was involved in the illegal theft of information from telephones and computers, “hooded men breaking into offices” and “plans to kidnap and harm Mr Assange.”

“To be blunt, we need more time,” he told the court. The “enormity” of the issues in the case required “evidence gathering that would test most lawyers.”

Summers explained that a delay was also needed due to conditions facing Assange at Belmarsh Prison. His client had no access to information, no phone contact with his US legal team and mail restrictions meant he had only received court documents from his lawyers one week before today’s hearing.

Responding on behalf of the US government, Lewis told Baraitser, “You shouldn’t be beguiled into accepting” the three-month delay argued by Assange’s lawyers. “It’s just a guesstimate.”

Summers appealed to Baraitser that the February date for a full extradition hearing “isn’t sustainable.” He repeatedly stated that Assange’s right to a fair and equitable trial was being placed in jeopardy.

Baraitser was unmoved, stating: “My intention is to adopt the timetable suggested by Mr Lewis.” While granting to the defence a two-month extension to gather further evidence, she ruled the full extradition hearing would proceed on February 25.

In a final vindictive move, Baraitser declared that next year’s week-long extradition hearing would take place at Belmarsh Magistrates Court near Belmarsh Prison. There were audible gasps in the public gallery at Baraitser’s announcement. The venue near Belmarsh has a “public gallery” of just five seats, all but denying public scrutiny and allowing a biased media to selectively report and spread disinformation and lies.

Summers immediately objected to Baraitser’s choice of venue. Not only was the court difficult to reach—adding to an already impossible schedule and workload for the legal team—its facilities were inferior to those at Westminster and it even lacked conference rooms that would be vital for confidential legal discussions. His concerns were dismissed.

As the hearing drew to an end, Baraitser to turned to Assange and asked him to rise.

“Do you understand what has happened here today?”

Assange, who has endured months of solitary confinement and been cut off from daily access to outside information, replied after a long pause:

“Do I understand? Not really.”

“Is there anything else you would like to say?” Baraitser asked.

“I don’t understand how this is equitable.” Assange replied, speaking softly and inaudibly at times. “This superpower had 10 years to prepare for this case. I can’t remember anything. I can’t access any of my written work. It’s very difficult to do anything with such limited resources against a superpower intent on [inaudible]… They have an unfair advantage dealing with documents. They [know] the interior of my life with my psychologist. They steal my children’s DNA. This is not equitable what is happening here.”

“I can’t think properly,” he concluded, fighting back tears and raising both hands to his head. “The conditions of your detainment are not the subject of this court,” Baraitser replied.

These were the final words spoken before Assange was led from the dock, out of view of his supporters in the public gallery.

“The case should be thrown out immediately. Not only is it illegal on the face of the treaty, the US has conducted illegal operations against Assange and his lawyers which are the subject of a major investigation in Spain.”

Outside the court, Hrafnsson and Pilger addressed around 200 demonstrators who had made their presence felt throughout the morning. The crowd included dozens of Yellow Vests who had travelled overnight by coach from France. 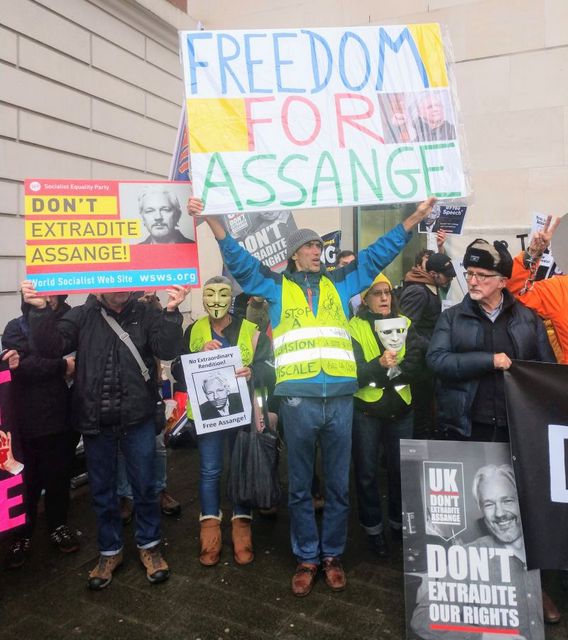 “The whole thing is a grotesque absurdity. There is an extradition law between this country and the United States. It states specifically that someone cannot be extradited if the offences are political… It is not a bit of agitprop, it is not an opinion, they are political. All but one charge is based on the 1917 Espionage Act, which was used to jail conscientious objectors during the First World War in the United States.”

“The source of this is a rogue state—a state that ignores its own laws and international laws and the laws of this country.”