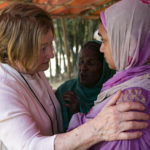 One young woman, Fatima (20), told us how Myanmar soldiers entered their village and came into her home. They shot her husband, made her carry her six month- old baby girl down to the lake where they threw the child into the pond and drowned her. They took Fatima back to her home; several soldiers held her down and constantly raped her until she became unconscious. They carried her outside to the field where they left her for dead. She was saved by an elderly Rohingya woman who helped her get across the border into Bangladesh. – Rohingya Genocide Day 25 Aug 2018

16 May 2018 – Since the beginning of the Palestinian Grand Return March on land Day 30th April, the world has looked on in horror as Israel has killed at least 109 Palestinians and injured thousands of unarmed protestors. I extend to the Palestinian people my deepest sympathy on the killing of their sons and daughters and the continuing occupation and seizing of their land by Israel. I thank them for their courage and sacrifice to challenge injustice and the latest inhumanity perpetrated upon them by Israeli/USA policies.