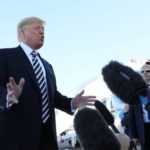 Trump Says US Will Withdraw from Nuclear Arms Treaty with Russia
Julian Borger and Martin Pengelly – The Guardian, 22 Oct 2018

21 Oct 2018 – Experts warn of ‘most severe crisis in nuclear arms control since the 1980s’ as Trump confirms US will leave INF agreement. “We’ll have to develop those weapons,” the president told reporters in Nevada after a rally. “We’re going to terminate the agreement and we’re going to pull out.”

Michael Sam, the college defensive end who made headlines earlier this year by coming out, is set to become the first openly gay player to play in the National Football League. Sam was picked in Saturday’s [10 May 2014] final round of the NFL Draft, by the St Louis Rams.