• Missouri star taken 34th in final round of Draft, 249th overall
• Debate continues over defensive end’s decision to come out 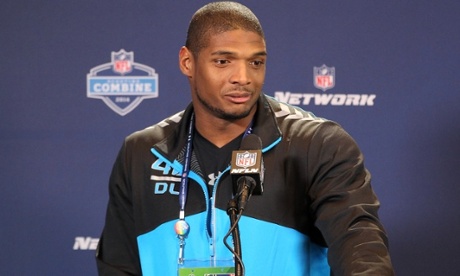 Michael Sam, the college defensive end who made headlines earlier this year by coming out, is set to become the first openly gay player to play in the National Football League.

The annual selection process continued with rounds four to seven, beginning with the 101st pick and concluding with the 256th. The University of Missouri Tigers star was picked 34th in the round and 249th overall.

As the conclusion of the three-day Draft approached, debate intensified over whether Sam’s failure to be picked earlier was due to his sexuality or his playing ability.

Before he came out, Sam had been predicted by many to be taken in the third round. His stock fell after his announcement and suffered further after February’s NFL scouting combine in Indianapolis, at which he was considered to have performed poorly. He was still thought to be a likely fourth- or fifth-round pick, although the noted statistician Nate Silver this week rated his chances of any selection at all at only 50-50.

The 2013 SEC defensive player of the year is seen by some observers as a “tweener”, not ideally sized for any position in the professional league.

Sam came out in public in February. At the time, he said: “I just want to make sure I could tell my story the way I want to tell it. I just want my own truth.”

In response one former NFL coach, speaking anonymously to Sports Illustrated, said: “I don’t think football is ready for [an openly gay player] just yet.”

The Alabama Crimson Tide quarterback AJ McCarron, the subject of media interest over the potential distraction of his impending marriage to Katherine *Webb, a winner of the Miss Alabama contest, was drafted 24th in the fifth round, 164th overall, by the Cincinnati Bengals.

At the combine, Sam told the press: “Good afternoon, my name is Michael Sam. I played football for the University of Misssouri. As you may know, Missouri is the ‘Show Me State’, and you’d think I’d shown you guys enough these last few weeks.”

When questions nonetheless focused on his decision to come out, he said: “I wish you guys would just say: ‘Hey, Michael Sam, how’s football going, how’s training going?’ I would love for you to ask me that question.

The NFL’s attitude to homosexuality has come under intense scrutiny in recent seasons. In January 2013, Chris Culliver of the San Francisco 49ers apologised for homophobic comments made in an interview in the run-up to Super Bowl XLVII. A month later, in the aftermath of the Manti Te’o affair, college player Nick Kasa said teams at the combine were asking potential recruits about their sexuality.

In January 2014 Chris Kluwe, a punter who has spoken publicly against homophobia in the sport, suggested his release by the Minnesota Vikings might have been due to such activism. The Vikings issued a public rejection.

Discussing Sam’s prospects before the Draft, Kluwe said: “Projectable guys who have to change positions are generally drafted in rounds three through five. A bad combine shouldn’t send him out of the draft. If that’s the precedent and that precedent is not met, then why not?”

Sam’s decision to come out was greeted by the first lady, Michelle Obama, who also voiced support for Jason Collins, the veteran NBA centre who came out in April 2013.

Collins, now a leading advocate for gay rights, played for the Brooklyn Nets this season, making him the first openly gay player in any of the major US professional sports – men’s football, basketball, baseball and hockey.

After Collins came out, the former Baltimore Ravens linebacker Brendon Ayanbadejo said four NFL players were close to following suit. No players subsequently did so.

Robbie Rogers, a USA national soccer team winger, came out when he retired from playing in Britain last year. He has since returned to action with Major League Soccer’s Los Angeles Galaxy.