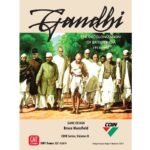 14 Aug 2020 – “Gandhi” is a wargame that inverts Clausewitz’s famous dictum: Instead of war as politics by other means, nonviolence becomes war waged by other means. Players control one of four competing factions: the British Raj; the Indian National Congress; the Muslim League; or the Revolutionaries.