Videogame: Nonviolence as War by Other Means

As “Gandhi,” a new wargame, demonstrates, peaceful protest is mightier than the sword. 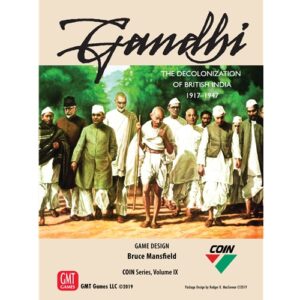 14 Aug 2020 – Protests in the streets. Police firing tear gas at demonstrators. A country at times so aflame that some demand the military intervene.

The images of protesters in the United States confronting heavily armed police and National Guard troops recall the turmoil of 75 years ago, when India sought independence from the British Empire. True, one was a campaign to break the chains of colonialism, while the other is a fight for civil rights and economic equality. Yet the current struggle faces a similar dilemma: violence or nonviolence?

To proponents of nonviolent protest, resorting to violence against the power of the state—whether British soldiers or the Minneapolis police—isn’t just morally wrong. It is suicidal against a foe with vastly superior firepower.

However, to more radical activists, nonviolence is futile. To them, it’s an invitation to be killed, beaten, or ignored by an entrenched power structure that won’t respond to pleas but just might respond to force.

But is the sit-in mightier than the sword? In 1947, the answer was yes. That was the year that British soldiers and administrators—who had ruled some or all of India for nearly two centuries—peacefully climbed aboard ships to return home to Britain.

There were numerous reasons for Britain’s withdrawal, including financial exhaustion from fighting two world wars and a post-World War II revulsion toward imperialism. But perhaps the biggest reason was the struggle by Mahatma Gandhi and his nonviolent protest movement.

“100,000 Englishmen simply cannot control 350 million Indians, if those Indians refuse to cooperate,” Gandhi warned. He was right. An empire that had defeated Napoleon and Hitler succumbed to marches and hunger strikes by unarmed people wearing homespun clothes.

Are there lessons for today’s America? The board game “Gandhi,” from the publisher GMT Games, posits some answers—or at least offers a unique framing of the question.

“Gandhi” is a wargame, but a strange one. It inverts Clausewitz’s famous dictum: Instead of war as politics by other means, nonviolence becomes war waged by other means.

“Gandhi” is a wargame, but a strange one. It inverts Clausewitz’s famous dictum: Instead of war as politics by other means, nonviolence becomes war waged by other means.

All four factions have different capabilities, weaknesses, and—most importantly—goals. The British want the support of the majority of the population. Congress wants to turn public opinion against the Raj enough to make India ungovernable. The Muslim League desires the same, except that it’s also trying to form a separate Muslim nation. As for the Revolutionaries, their goal is to create guerrilla cadres to foment mass armed rebellion.

Briefly described, the “Gandhi” gameboard depicts a series of rural provinces and major cities, linked by the railways that were the connective arteries of British India. These cities and provinces contain the population whose hearts and minds are the key to victory: They can be pro-Raj, neutral, or anti-Raj. Railways enable troops and activists to move around the map, as well as providing the economic resources that sustain British rule. Each turn, players draw cards and then move tokens reflecting troops, activists, and guerrillas as they perform various missions such as arresting activists or staging anti-government demonstrations.

In a game of “Gandhi” against three friends, I stepped into the role of the Raj between 1930 and 1947. The game starts with large parts of India, notably Bombay (now Mumbai), the Punjab, and East Bengal, rife with opposition activists. Scattered across India are British and sepoy (native Indian troops) regiments, with concentrations in Calcutta (Kolkata) and Delhi.

At first glance, the Empire appears all-powerful. To win the loyalty of the population, the Raj can wield the traditional carrots and sticks with which empires maintain their rule. It can spend resources to gain political support of cities and provinces. And if that doesn’t work, it has regiments of soldiers and sepoys who can be dispatched to quell unrest. At first, the correct strategy seems clear: Spend down the scarce pool of resource points to buy public support, while sending in the troops to arrest activists and wipe out guerrillas. Do it quickly before the opposition grows, and the Raj might yet keep the jewel in the Empire’s crown.

But there’s quickly a rude awakening: Choosing between violence and nonviolence is as much a dilemma for the government as the protesters.

But there’s quickly a rude awakening: Choosing between violence and nonviolence is as much a dilemma for the government as the protesters.

“Gandhi” features a Restraint Level that reflects the willingness of the British to use force. Each time the troops break up protests or arrest activists, the Restraint Level goes down. As the level decreases, the sepoys—who make up the bulk of the Raj’s forces—balk at shooting their fellow countrymen. Of course, the government can declare martial law to break up protests, but only at the cost of sparking unrest among the populace it’s trying to win over.

Indeed, when real-life Indian sailors mutinied in 1946, it was a sign that Britain was losing control over its security forces. Just as police in Minneapolis can attest, the more violence the government employs in “Gandhi,” the more costly it is to resort to violence in the future. By the game’s end, the Raj was tottering. Opposition tokens had spread across the map like measles, the railways had ceased to function, and the security forces had been overwhelmed. As more provinces and cities became restive, the Raj’s finances became more depleted, creating a vicious cycle in which each wave of repression became feebler.

Not that the choices were easier for the pro-independence groups. Nonviolence spared Congress and the Muslim League from bloody battles against soldiers and tanks. The price was accepting that the British could use force at will without fear of violent retaliation. Even for the Revolutionaries, a sort of Viet Cong on the Ganges, violence was not a guaranteed solution. They could conduct pinprick attacks, but the Raj was too strong to be driven out at the point of bayonets.

By the end of the game, the government’s near-monopoly of force proved unable to defeat a nonviolent struggle that slowly garnered popular support—province by province and city by city—until India became ungovernable. It was death by a thousand cuts that left the Raj in a state of creeping paralysis.

Ironically, while “Gandhi” depicts a largely nonviolent independence movement, it really is a wargame at heart. Staging protests and strikes—or smashing them—involves as much strategy and tactics as any military campaign. Proper allocation of resources, exquisite timing, flexibility, and resilience when the enemy interrupts your plans: Whether Napoleon’s army at Waterloo or Mahatma Gandhi’s followers in Delhi, the same principles apply.

Could Gandhi’s strategy work in today’s world? The game suggests that the answer is yes, though it would require a long, patient effort. It also assumes that there are political and moral limits on the government. Britain in 1947 could not employ its fading but still potent military might against unarmed protesters. China, another place where protest could break out, might not be as reluctant.

But ominously for the current protest movement in the United States, the game also highlights another problem: What happens when the anti-government opposition is itself split into competing factions? In “Gandhi,” Congress, Muslim League, and Revolutionaries are competing against each other as well as the government. They snatch each other’s supporters and undermine each other’s campaigns.

In that sense, “Gandhi” is zero-sum: There can be only one winner, which means the opposition factions can cooperate tactically, but must ultimately turn on each other. One can argue that winner-take-all is baked into “Gandhi” because it is a game, and games require a victor.

But looking at the spectrum of protesters in American cities, it’s easy to wonder whether the opposition can hold itself together. What happens if white liberals, Black activists, anti-fascists, feminists, and anarchists decide that the old system must go, but can’t agree on what the new system should look like?

India did achieve independence from Britain, and mostly through nonviolent means. But independence was quickly followed by ethnic and religious strife that killed up to 2 million people, displaced millions more, and left the subcontinent divided into hostile Hindu and Muslim states. In the United States, violence on that scale seems unlikely, but it’s not clear whether proposed reforms will satisfy demands for justice. Even today’s India has been plagued by anti-Muslim riots that could be a harbinger of greater civil strife.

However, “Gandhi” the game—just like the life of Gandhi the man—offers a glimpse of how nonviolence might triumph.

Michael Peck is a defense writer.