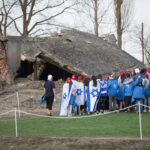 3 Dec 2020 – The image has become a familiar one: A group of young Israelis is visiting Auschwitz, many of them wrapped in the Israeli flag. “I think,” one of the students says, “that in order to survive we need to be a little bit Nazi, too . . . we have to be able to kill mercilessly. We don’t stand a chance if we’re too soft. . . It’s hard to distinguish civilians from terrorists. A boy who’s just a boy today could become a terrorist tomorrow. It’s us or them. We won’t let this happen again.” The reasoning is Nazi—literally the same reasoning to which the Nazis resorted to explain the slaughter of Jewish children.