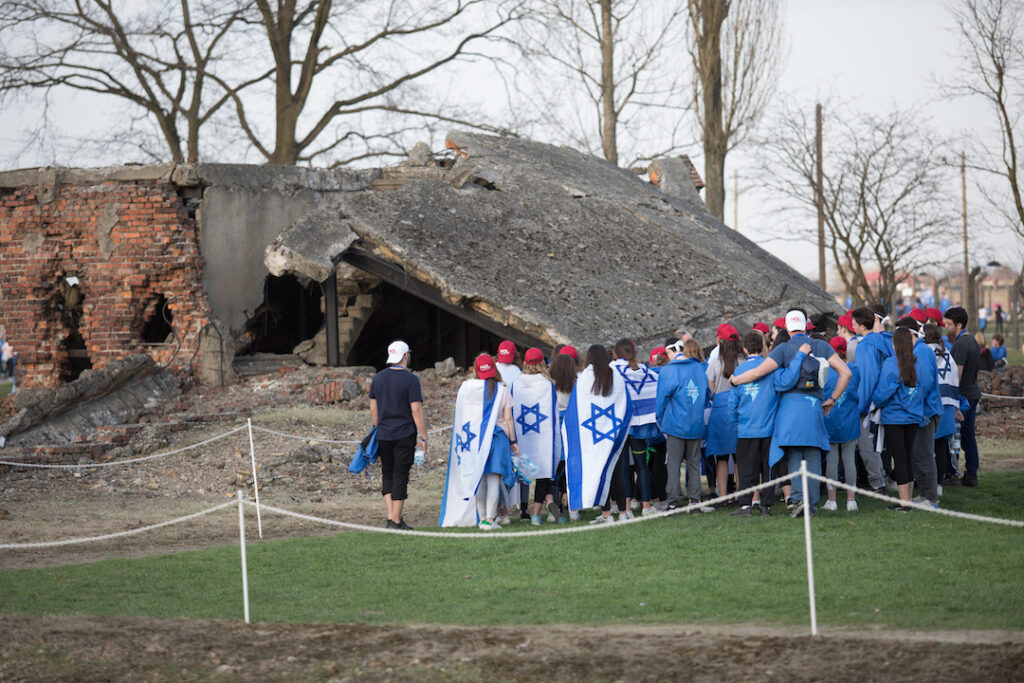 3 Dec 2020 – The image has become a familiar one: A group of young Israelis is visiting Auschwitz, many of them wrapped in the Israeli flag. They chant the Kaddish; they sing songs; together, they are a phoenix that has risen from the literal ashes of the millions of Jews killed by the Nazis. Their mere existence seems to be proclaiming vengeance wrought on Hitler. They are young; they are beautiful; they are noble.

But in The Memory Monster—a brilliant, challenging, and uncompromising novel by the Israeli writer Yishai Sarid, recently translated from the Hebrew by Yardenne Greenspan—they are something far more sinister. In this grim portrait of an Israeli scholar who makes his living leading tours of the hell of the camps, Sarid, son of the late left-wing politician Yossi Sarid, forces us to question the complacency and moral blindness that accompanies the centrality of the Holocaust in Israeli life. It’s a blindness broadly on display in Israeli Holocaust memorialization, currently epitomized in the nomination of Effi Eitam—a far-right politician and former general who advocates the expulsion of Palestinians from their lands and their exclusion from political life—to head Yad Vashem, the Israeli Holocaust memorial. Those who support the appointment, including Prime Minister Benjamin Netanyahu, fail to appreciate the revolting irony of a man with these views serving as the face of an institution that memorializes the expulsion of the Jews from their homes and their exclusion from the political life of their native lands. It is this irony that courses through The Memory Monster.

The nameless narrator, though based in Poland, works for Yad Vashem, and the novel takes the form of a letter to the director of the institution. He recounts his experiences as a tour guide there and in the death camps of Poland and explains his downward moral and emotional spiral, a result of living the Holocaust daily. As the narrator explains, he more or less fell into this line of work. As a graduate student, he lacked direction or any desire to exert himself in the pursuit of an academic career and wavered among many possibilities: diplomacy, Asian studies, moving to Thailand. He settled on Holocaust studies, writing a doctoral dissertation titled Unity and Distinction in German Death Camps’ Methods of Actions During World War II—a study of extermination processes that prepares him to work as a Holocaust tour guide.

The Memory Monster is animated not by stirring plot points, but by the vital questions the narrator asks of himself and those he takes on tours. His queries prod at the tour attendees’ feeling of moral purity, inviting them to occupy roles other than that of quintessential victim or existential avenger and thus displacing them from their comfortable, sacrosanct position. “Who among you,” the narrator asks his charges at one point, “would have rescued a strange, filthy boy who knocked on your door at night, putting your own life and the lives of your children at risk?” Some say they would—until he adds the crucial follow-up: “Would you die for him? . . . would you risk having your home set on fire with you and your children inside?” No one raises a hand. In the abstract, we are all heroes who would save the lives of strangers, but the narrator rubs the concrete fact of the risks of disinterested heroism in the young people’s faces—and in ours. If the righteous gentiles become in this way more heroic, the masses who did nothing become less worthy of easy condemnation.

As the young Israelis, mixed groups of Mizrahi and Ashkenazi Jews, walk through Majdanek, the narrator overhears their disturbing comments: “on the few hundred meters’ walk from the gas chambers to the dirt monument and the crematoriums,” he reports, “I heard them talking about Arabs, wrapped in their flags and whispering, The Arabs, that’s what we should do to the Arabs.” But not only to Arabs: “Ashkenazis, I heard them saying on more than one occasion, are the forefathers of left-wingers. They weren’t able to protect their wives and children, collaborated with their murderers, they weren’t real men, didn’t know how to hit back, cowards, softies, letting the Arabs have their way.” No site is safe from the perverted lessons the students have drawn from the Holocaust. At Auschwitz, he recalls, “this one fat student with mean eyes, cheeks purple with cold, began to scratch the words ‘Death to left-wingers’ onto a wooden wall in the women’s camp.” Sarid skillfully shows how the degradation of Israeli politics, the hatred of Arabs and anyone sympathetic to them, and the cult of masculinity and heartless toughness that drive Israeli society have turned the moral lessons of the Holocaust on their head.

If the students wish the worst on Arabs and leftists, the actual perpetrators of the Holocaust escape untouched. The narrator observes that, to his students, the Nazis “looked totally cool in those uniforms, on their bikes, at ease like male models on billboards,” and their “fair, clean European look makes you want to emulate them.” The kids therefore feel that Israel, that Middle Eastern outpost of the cool, has far more in common with the Germans, in their Hugo Boss-designed uniforms, than the Arabs, “with their stubble and their brown pants that go wide at the bottom.” The narrator can only try—and fail—to love his students despite this.

The narrator’s critique casts a wide net. He reflects that the Poles, on whose lands the Germans did much of their killing, keeping their own country green and clean, have, like the Israelis, learned nothing. He’s unsettled by the persistence of racist policy in the country—the borders closed to Black people and Arabs—and by Israel’s providing technical support to the Polish government for this task. Their land having been cleansed of the Jews—having become a land of true Poles—the homogenous citizenry now longs to keep it that way. “And it’s working,” the narrator writes. “All you see on the streets are white faces, all alike, unnerving.”

Meanwhile, the Israelis cling to their own nationalism. As they are shown the camps, amid graphic descriptions of the methods of murder, the narrator tells us, “they sang the anthem . . . They spent most of their time in Poland cloaked in flags, singing.” He asks a teacher whether this cheapens the anthem, but she insists that this is “what comforts them.” Despite the horrors of history—or to counter those horrors—they have to sing what the teacher calls their “victory song”: “‘Without it, what do we have left,’ she asks,” then answers her own question: “‘Despair. We don’t want them coming home in despair. We want to fill them with hope.’” Hope in what, hope for what? No one ever inquires. 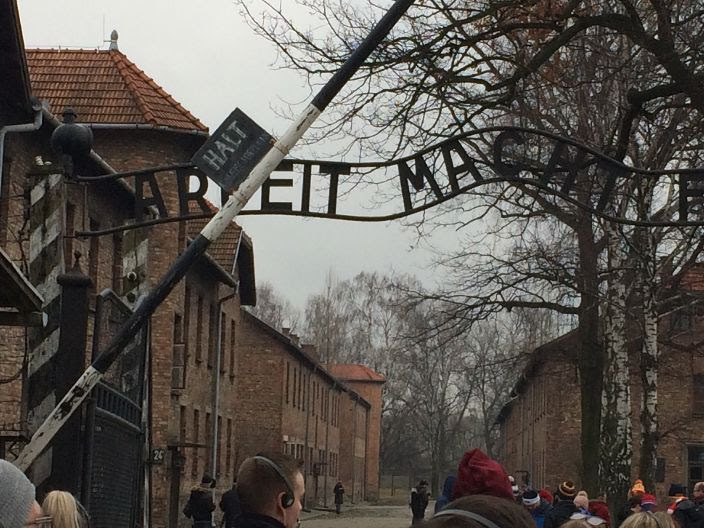 At the end of one tour, the guide asks the required question: “What has the trip taught you?” The answer is harrowing:

“But you’re talking about killing innocent people,” the principal clarified.

The boy thought for a moment, calculated, taking his time . . . Then he said, “Sometimes there’s no choice but to hurt civilians, too. It’s hard to distinguish civilians from terrorists. A boy who’s just a boy today could become a terrorist tomorrow. This is, after all, a war of survival. It’s us or them. We won’t let this happen again.”

The reasoning is Nazi—literally the same reasoning to which the Nazis resorted to explain the slaughter of Jewish children. But by this point, the guide—once aghast at the children’s monstrosity—has grown accustomed to it, and finds himself neither horrified nor even disappointed. The students have received the message that was intended, the message that has become Israel’s:

Only power. No conscience, no manners, no second-guessing. Those only challenge the soul and harm functionality. We can’t allow ourselves even a moment of weakness, because everything will be taken away. We have to be a little bit Nazi. You’ve finally said it. You got the point, kids, well done.

To be sure, we are not meant to view the acquiescent narrator as an admirable figure; his final, violent act makes this abundantly clear. Even he recognizes that his pages “are overflowing with perversion and self-hatred and emotional vomit” that can only inspire revulsion. The tone and spirit of The Memory Monster is Dostoevskyan, and its narrator not unlike the Underground Man, who perceptively observes the baseness in both himself and the world. But if his vision is exaggeratedly bleak, it is also honest.

The Memory Monster is a damning novel. It lays bare the hard truth, often obscured by a too-hopeful vision of humanity, that Holocaust education has not led to a softer, kinder world, and “Never Again” merely means “never again for us.” Barbarism, ethnic exclusivity, and militarism remain widespread—and, if Effi Eitam does take over Yad Vashem, these impulses will soon have an official home in the sanctum sanctorum of Holocaust memorialization.
__________________________________________________

Mitchell Abidor, a contributing writer to Jewish Currents, is a writer and translator living in Brooklyn. His latest books are translations of Victor Serge’s Notebooks 1936-1947; Down With the Law, a collection of French individualist anarchist writings; and May Made Me: An Oral History of 1968 in France.