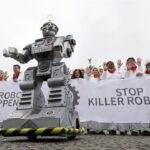 9 Jan 2022 – The continued construction and deployment of killer robots is not inevitable. Let’s give U.N. Secretary General Antonio Guterres the last word: “Machines with the power and discretion to take human lives without human involvement are politically unacceptable, morally repugnant, and should be prohibited by international law.” I couldn’t agree more.

I now face students who have lived their entire conscious lives in a country we are told is “at war” since 2001 when George W. Bush declared a War on Terror. Theirs is the strangest of “wars,” one without sacrifice. It lacks the ration books, the blackouts, the shortages experienced during World War II. It lacks the fear that an enemy army will land on our coasts or descend from our skies. None of us fears that war will take away our food, electricity, water, or most precious of all, our Wi-Fi. For us, that is only an endless make-believe war, one that might as well be taking place on another planet in another universe.

Counting the Crimes of the War on Terror
Rebecca Gordon – TomDispatch, 20 Jun 2016

Should George Bush, Dick Cheney, and Others Be Jailed? Maybe we’ll never see America’s torturers behind bars. They should still have to tell the truth about what they did.

Once upon a time, if a character on TV or in a movie tortured someone, it was a sure sign that he was a bad guy. Now, the torturers are the all-American heroes. There is a word for people whose first concern is always for their own safety and who will therefore permit anything to be done in their name as long as it keeps them secure. Such people are sometimes called cowards.