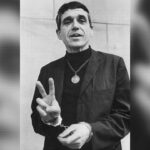 27 Apr 2021 – Five years since his death and 100 since his birth, legendary priest, author, poet and activist Daniel Berrigan continues to offer wisdom and insight on living a life of creative nonviolence. 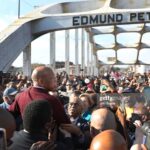 In this never-before-released interview, the late civil rights leader and congressman talks systemic racism, permanent warfare, extreme poverty and nonviolence as a way of life.

It was early 1968. Since the previous spring Martin Luther King, Jr. had been pursuing a course that for many was unthinkable. He had deliberately connected the dots between the movement for civil rights and the struggle to end the war in Vietnam, and had paid the price.

If the Standing Rock campaign is able to stop or reroute the pipeline, it will do so because of their steadfast nonviolence and the strong movement that has grown up around them. But like every grassroots movement of nonviolence, they need help and are asking for it. Everyone can get involved to help build this movement, support their nonviolence, and reach that good outcome and transformation.

One of the legends in the U.S. peace movement, Sister Anne Montgomery, died this week [31 Aug 2012] in California. A member of the Religious of the Sacred Heart, she spent over three years in prison for many civil disobedience actions against war, including seven plowshares anti-nuclear disarmament actions; many years teaching in Harlem, and many years living with the Christian Peacemaker Team in Hebron, Palestine-Israel.