MLK: The Year of “Nonviolence or Non-Existence” 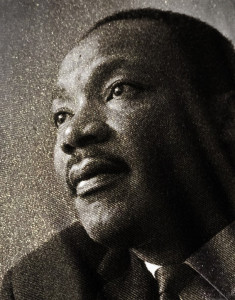 It was early 1968.  Since the previous spring Martin Luther King, Jr. had been pursuing a course that for many was unthinkable.  He had deliberately connected the dots between the  movement  for civil rights and the struggle to end the war in Vietnam, and had paid the price.  He was roundly criticized by the Johnson administration and the media, as well as people in his own movement.   From the right he was attacked for having the gall to question US foreign policy.  From the left he was lambasted for losing focus and not keeping his eyes on the prize.

He even got it from a childhood friend who stopped by the house one afternoon to vent.

“Why are you speaking out against the Vietnam War?” he carped.

King put aside his customary oratory. “When I speak about nonviolence,” he patiently explained, “I mean nonviolent all the way.”

As David Garrow’s classic biography of King, Bearing the Cross, reports, he went on to say, “Never could I advocate nonviolence in this country and not advocate nonviolence for the whole world.  That’s my philosophy. I don’t believe in death and killing on any side, no matter who’s heading it up—whether it be America or any other country. Nonviolence is my stand and I’ll die for that stand.”

A few months later King was dead, but not before making one last, indelible declaration of  the  existential importance of nonviolence.

Standing before the jammed crowd at the Mason Temple in Memphis the night before his death, King linked his life wisdom with a pithy and resounding appraisal of our global predicament: “The choice before us is no longer violence or nonviolence,” he said. “It’s nonviolence or non-existence.”

This April marks the 50th anniversary of King’s assassination—and of King’s clear warning.  This is a moment not simply for remembering a great leader cut down in his prime but also  for seriously  contemplating the acute clarity of his assessment and what it means for us today.

Sadly, in the same way that warnings of climate change have mostly been dismissed for decades, Dr. King’s stark framing of the pivotal choice before us—nonviolence or nonexistence—was steadfastly  ignored over the past half-century as the United States lurched from another seven years of the Vietnam War to decades of war in Central America, Iraq, Afghanistan, and many other places, even as the violence of racial injustice, economic inequality, environmental destruction, nuclear proliferation, gun deaths, armed drones, and many other forms of violence spiraled out of control.  Indeed, over these decades we have consistently opted for violence even as we have shunned the word “nonviolence,” as if it were the most dangerous word in the English language.

Now, 50 years on, King’s words take on more weight with each passing hour.

Fifty years after the watershed year of 1968, we are at another watershed, and Dr. King has put the fundamental choice before us. This is the Year of “Nonviolence or Nonexistence.”

Kingian nonviolence calls for active, universal love toward all human beings, all creatures, and all creation, that refuses to kill or be silent in the face of killing. It is a way of life, a spiritual path, and a political methodology toward peaceful conflict resolution and global justice.

“A culture of nonviolence is not an impossible dream,” Pope Francis said recently, following up on his 2017 World Day of Peace message, “Nonviolence—A New Style of Politics,” the first statement on nonviolence in the history of the Catholic Church.

But our culture of violence begs to differ.  “No, Pope Francis,” it says, “a culture of nonviolence is an impossible dream. No, Dr. King, there is no choice; non-existence is inevitable.” Deep down, that’s what we think, isn’t it? That’s what the culture of violence, the voice of despair, tells us.

If we give in to such despair, then our fate is sealed. But this need not be how things turn out.

The ironic good news is that never before have so many nonviolent movements existed in this country and around the globe.  The world is on the march for the nonviolent option, and we, too, can opt for active, creative and powerful nonviolence—and not for the trajectory of nonexistence—by joining them in this critical year.  It’s our most important choice ever.

Rev. John Dear, syndicated by PeaceVoice, is the author of the forth-coming book, They Will Inherit the Earth: Peace and Nonviolence in a Time of Climate Change.  He works for www.campaignnonviolence.org.

Anticopyright: Editorials and articles originated on TMS may be freely reprinted, disseminated, translated and used as background material, provided an acknowledgement and link to the source, TMS: MLK: The Year of “Nonviolence or Non-Existence”, is included. Thank you.