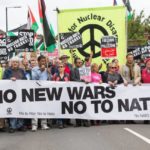 6 Jan 2022 – Western media and political analysts have cast Putin’s demands that NATO not expand further east to Ukraine and that NATO not establish military bases in former Soviet states as bold and impossible. Here are six crucial pieces of background that the western media will not tell you.

Why Are We Still at War with Syria?
Ted Snider | Antiwar - TRANSCEND Media Service, 2 Aug 2021

15 Jul 2021 – While congress continues to ask Biden to justify bombing Syria without congressional approval, the real question is: Why is the US bombing and sanctioning Syria at all?

A favorite tactic of U.S. war propaganda is to label a foreign adversary “crazy” to justify a military attack — as is now happening with North Korea’s Kim Jong-un although his nuclear program really makes logical sense.

There are no U.S. troops in Venezuela, but, make no mistake, the war is on. There is more than one way to change a regime. Recent history has shown the United States that the most obvious one, the one employed or permitted in Honduras, will not work in Venezuela. That has already been tried. When […]