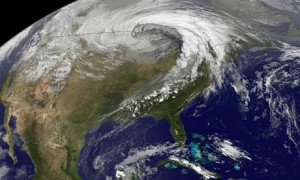 This Nasa Earth Observatory image shows a storm system circling around an area of extreme low pressure in 2010, which many scientists attribute to climate change.
Photograph: AFP/Getty Images

A new study sponsored by Nasa’s Goddard Space Flight Center has highlighted the prospect that global industrial civilisation could collapse in coming decades due to unsustainable resource exploitation and increasingly unequal wealth distribution.

Noting that warnings of ‘collapse’ are often seen to be fringe or controversial, the study attempts to make sense of compelling historical data showing that “the process of rise-and-collapse is actually a recurrent cycle found throughout history.” Cases of severe civilisational disruption due to “precipitous collapse – often lasting centuries – have been quite common.”

The research project is based on a new cross-disciplinary ‘Human And Nature DYnamical’ (HANDY) model, led by applied mathematician Safa Motesharri of the US National Science Foundation-supported National Socio-Environmental Synthesis Center, in association with a team of natural and social scientists. The study based on the HANDY model has been accepted for publication in the peer-reviewed Elsevier journal, Ecological Economics.

It finds that according to the historical record even advanced, complex civilisations are susceptible to collapse, raising questions about the sustainability of modern civilisation:

“The fall of the Roman Empire, and the equally (if not more) advanced Han, Mauryan, and Gupta Empires, as well as so many advanced Mesopotamian Empires, are all testimony to the fact that advanced, sophisticated, complex, and creative civilizations can be both fragile and impermanent.”

By investigating the human-nature dynamics of these past cases of collapse, the project identifies the most salient interrelated factors which explain civilisational decline, and which may help determine the risk of collapse today: namely, Population, Climate, Water, Agriculture, and Energy.

These factors can lead to collapse when they converge to generate two crucial social features: “the stretching of resources due to the strain placed on the ecological carrying capacity”; and “the economic stratification of society into Elites [rich] and Masses (or “Commoners”) [poor]” These social phenomena have played “a central role in the character or in the process of the collapse,” in all such cases over “the last five thousand years.”

Currently, high levels of economic stratification are linked directly to overconsumption of resources, with “Elites” based largely in industrialised countries responsible for both:

“… accumulated surplus is not evenly distributed throughout society, but rather has been controlled by an elite. The mass of the population, while producing the wealth, is only allocated a small portion of it by elites, usually at or just above subsistence levels.”

The study challenges those who argue that technology will resolve these challenges by increasing efficiency:

Productivity increases in agriculture and industry over the last two centuries has come from “increased (rather than decreased) resource throughput,” despite dramatic efficiency gains over the same period.

Modelling a range of different scenarios, Motesharri and his colleagues conclude that under conditions “closely reflecting the reality of the world today… we find that collapse is difficult to avoid.” In the first of these scenarios, civilisation:

“…. appears to be on a sustainable path for quite a long time, but even using an optimal depletion rate and starting with a very small number of Elites, the Elites eventually consume too much, resulting in a famine among Commoners that eventually causes the collapse of society. It is important to note that this Type-L collapse is due to an inequality-induced famine that causes a loss of workers, rather than a collapse of Nature.”

Another scenario focuses on the role of continued resource exploitation, finding that “with a larger depletion rate, the decline of the Commoners occurs faster, while the Elites are still thriving, but eventually the Commoners collapse completely, followed by the Elites.”

In both scenarios, Elite wealth monopolies mean that they are buffered from the most “detrimental effects of the environmental collapse until much later than the Commoners”, allowing them to “continue ‘business as usual’ despite the impending catastrophe.” The same mechanism, they argue, could explain how “historical collapses were allowed to occur by elites who appear to be oblivious to the catastrophic trajectory (most clearly apparent in the Roman and Mayan cases).”

Applying this lesson to our contemporary predicament, the study warns that:

“While some members of society might raise the alarm that the system is moving towards an impending collapse and therefore advocate structural changes to society in order to avoid it, Elites and their supporters, who opposed making these changes, could point to the long sustainable trajectory ‘so far’ in support of doing nothing.”

However, the scientists point out that the worst-case scenarios are by no means inevitable, and suggest that appropriate policy and structural changes could avoid collapse, if not pave the way toward a more stable civilisation.

The two key solutions are to reduce economic inequality so as to ensure fairer distribution of resources, and to dramatically reduce resource consumption by relying on less intensive renewable resources and reducing population growth:

“Collapse can be avoided and population can reach equilibrium if the per capita rate of depletion of nature is reduced to a sustainable level, and if resources are distributed in a reasonably equitable fashion.”

The NASA-funded HANDY model offers a highly credible wake-up call to governments, corporations and business – and consumers – to recognise that ‘business as usual’ cannot be sustained, and that policy and structural changes are required immediately.

Although the study is largely theoretical, a number of other more empirically-focused studies – by KPMG and the UK Government Office of Science for instance – have warned that the convergence of food, water and energy crises could create a ‘perfect storm’ within about fifteen years. But these ‘business as usual’ forecasts could be very conservative.

Dr Nafeez Mosaddeq Ahmed is a member of the TRANSCEND Network for Peace, Development and Environment, director of the Institute for Policy Research & Development, a bestselling author, investigative journalist and international security scholar who writes for The Guardian on the geopolitics of environmental, energy and economic crises. The Sibel Edmonds memoirs, Classified Woman: The Sibel Edmonds Story is available from all good online booksellers.