Brazil this week marks the 50th anniversary of the April 1, 1964, military coup that subjected Latin America’s largest country to 21 years of brutal dictatorship.

The events of 50 years ago were orchestrated from start to finish by the CIA, the State Department, the Pentagon and the White House under both John F. Kennedy and Lyndon B. Johnson. 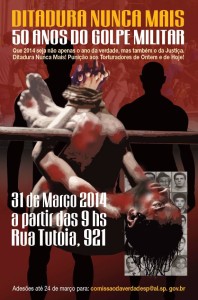 The Rack (Pau-de-Arara) – Electric shocks were applied to hands, feet, genitals, anus of the person being interrogated. The CIA introduced this torture device to South America in Operation Condor. The War in fashion was on Communism/Communists-precursor of the War on Terrorism.

In addition to a series of forums, exhibitions and meetings called to recall the horror unleashed 50 years ago and honor its many thousands of victims, Dilma Rousseff, Brazil’s Workers Party (PT) president, who was herself jailed and tortured under the US-backed dictatorship, marked the occasion with a televised speech urging the country to “remember what happened,” while asserting that Brazilians could “look at this period and learn from it, because we’ve overcome it.”

Meanwhile, her justice minister, Jose Eduardo Cardozo, issued an official apology on behalf of the Brazilian government “for what was done under the dictatorship, for the deaths, for the torture.”

This formal apology belies Rousseff’s claim that the events of 1964 have been “overcome” and serves to underscore the fundamental continuity of the present Brazilian state and its repressive apparatus with the dictatorship that ceded power to civilian rule 29 years ago. Throughout that period successive governments—including more than 10 years of rule by the PT—have kept in place a blanket amnesty imposed by the ruling junta in 1979, which has prevented a single military or police official from being held accountable for the crimes committed under military rule.

A chilling demonstration of the impunity enjoyed by the dictatorship’s criminals came barely a week before the anniversary in a report on the testimony given by a retired Brazilian army colonel to one of the so-called truth commissions set up under Rousseff.

The ex-officer, Paulo Malhães, explained to the commission in detail the acts for which he was responsible at a clandestine torture center known as the “House of Death” in the town of Petropolis, north of Rio de Janeiro. Malhães recounted how, after prolonged torture, political prisoners would be executed, and that he would then methodically sever their fingers and break out their teeth to ensure that their bodies could never be identified.

“He showed no repentance,” said Nadine Borges, a lawyer with the Rio truth commission who took the testimony. “He says it was an anti-communist struggle, of good against evil and that war was war.… I was struck by the precision with which he recounted the facts and the pride he took in having served the army command.”

While the number of Brazilians officially identified as having been murdered by the dictatorship stands at 486, many thousands more “disappeared” under military rule. More than 100,000 were imprisoned for political reasons, and at least 50,000 were tortured.

This savage repression against Brazilian workers, peasants, students, artists and intellectuals was unleashed with the full support and intimate involvement of the US government.

A cable sent on March 27, 1964—just days before the coup—from US ambassador Lincoln Gordon to the State Department in Washington gives some sense of the depth of the US involvement in the plot to overthrow Brazil’s democratically elected government of President Joao “Jango” Goulart and of the lengths to which Washington was prepared to go to achieve its aims.

Goulart, the product of a wealthy landowning family, had offended Washington by implementing a series of reform measures, including the nationalization of a subsidiary of ITT and several oil refineries, limits on the repatriation of profits by foreign corporations and a land reform program. He had also opposed US sanctions against Cuba.

Ambassador Gordon acknowledged that the possible consequences of the coup “clearly include civil war,” pitting the military against the civilian population. Such a bloodbath was justified, he argued, in order to prevent Brazil from becoming “the China of the 1960s.”

Gordon urged support for a military coup led by Gen. Humberto Castelo Branco, who had been appointed by Goulart as Army chief of staff. Castelo Branco had been hand-picked for the role by the US military attaché in Brazil, then-colonel Vernon Walters, who had established close relations with the Brazilian generals while serving as the American liaison to the Brazilian Expeditionary Force sent to fight in Italy in World War II. After the success of the coup in Brazil, Walters was promoted to general and went on to become the deputy director of the CIA in the 1970s and US ambassador to the UN in the 1980s.

Gordon’s cable urged the Johnson administration to prepare “a clandestine delivery of arms” to the coup forces as well as fuel supplies, while preparing for “overt intervention” by dispatching a US naval battle group to the Brazilian coast together with a contingent of Marines. He warned in particular against possible “general strike efforts” by the Brazilian working class.

The ambassador added that the embassy in Brazil would undertake “complementary measures with our available resources to help strengthen resistance forces.” These, he said, would include “covert support for pro-democracy street rallies” and “encouragement of democratic and anti-Communist sentiment in Congress, armed forces, friendly labor and student groups, church, and business.”

In reality, these “complementary measures” had been going on ever since Goulart had become president in 1961. By 1963, President Kennedy had given a green light for the preparation of a coup. Tens of millions of dollars were funneled into the country to buy up congressmen and run candidates picked by the CIA. The US intelligence agency acting through the AFL-CIO union bureaucracy recruited and trained right-wing union bureaucrats in Brazil to provide logistical support for the coup. And US agents worked to disseminate anti-communist propaganda and foment right-wing demonstrations.

As for Gordon’s recommendations, they were all accepted by the Johnson administration, which launched what became known as Operation Brother Sam. An aircraft carrier battle group was dispatched to the South Atlantic along with tankers carrying oil supplies, and 110 tons of weaponry, including CS gas, 12-gauge shotguns and other anti-riot gear, were amassed at McGuire Air Force Base in New Jersey for a planned airlift to Brazil.

In the end, overt intervention was not required because Goulart—bowing to the dictates of imperialism and the Brazilian ruling class—failed to resist the coup, fleeing Rio for his ranch in the southern state of Rio Grande do Sul and then into exile in Uruguay and subsequently Argentina. Scattered resistance within the working class, whose struggles had been subordinated to the Goulart government by its Stalinist leadership, was crushed.

Goulart died suddenly in 1976 in Argentina. Last November, the Brazilian government had his body exhumed as part of an investigation into charges that he was poisoned as part of the Operation Condor assassination program run by Latin America’s dictatorships in consultation with the CIA.

The Johnson administration moved swiftly to recognize the military junta under Castelo Branco. In a recorded conversation with his national security adviser, McGeorge Bundy, Johnson brushed aside a recommendation that he exercise caution in backing the regime amid the first reports of mass arrests, killings and torture. “I think there’s some people who need to be locked up,” he responded, insisting that the US give the dictatorship its “warm” support.

Warm backing also came from US corporations. The US Chamber of Commerce in Sao Paulo publicly backed the dictatorial decrees of the regime, declaring them essential to achieving “economic stability.” General Motors, Ford, Firestone, Volkswagen and other companies established intimate ties with the dictatorship’s secret police, providing them with the names of militant workers who would subsequently be seized, tortured and “disappeared.” As with the Brazilian military, none of these companies have ever been called to account for their crimes. They continue to reap profits in the country, their interests protected by the PT government.

The coup not only ushered in a two-decades-long nightmare in Brazil, but also provided the model for subsequent US-backed coups in Uruguay, Argentina, Chile and elsewhere in Latin America, leading to the deaths, torture and imprisonment of hundreds of thousands more. The Brazilian military, trained by the Pentagon, provided “advisers” on repression to its counterparts in these countries.

As Washington today postures as the champion of democracy and the right of peoples to “define their own future” in targeted countries such as Ukraine and Venezuela, the Brazilian coup’s anniversary underscores US imperialism’s role as the world’s foremost gangster regime.