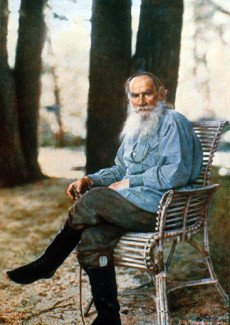 I’ve just finished reading Leo Tolstoy’s remarkable book The Kingdom of God Is Within You. This was written in Russian and completed in 1893, but the Russian censors forbade its publication. It circulated in unpublished form in Russia, however, and was soon translated into other languages and published abroad. It had substantial influence on the course of history, perhaps most of all because of its influence on Gandhi.

The book is odd in several respects. In a purely literary sense, it is by no means a masterpiece, as Tolstoy’s great novels, written earlier in his life, were. In places it reads more like a set of notes for a book than as a polished work. For example, it contains many very long block quotations and much unnecessary repetition. However, Tolstoy’s mastery as a writer still shines in the brilliance of some of his formulations, especially in the second half of the book.

Odd, too, is Tolstoy’s own curiously uneven command of different aspects of his subject. In regard to the nature and operation of the state and the sociology of human interrelations in the socio-political order, Tolstoy’s clear-eyed insights cut to the quick. He makes even an analyst such as James Buchanan, who complained about people’s “romantic” views of politics and the state, seem utterly romantic. In contrast, Tolstoy’s understanding of economics was abysmal and leads him into foolish notions of the equivalence between state acts and capitalist acts. He seems also to have given no thought to what the consequences would be if his communistic preferences about the distribution of property were adopted in practice. Although he had excellent insights into the role of (what I call) ideology in the maintenance of the state-dominated social order, he entertained a view of how the dominant ideology was changing and would continue to change that seems to me completely lacking in contemporary evidence and utterly at variance with everything we now know about how ideology did change during the past century or so. He greatly overestimated the hold that Christian morality had on the souls of people in the West at the time he was writing, not to speak of later, even less Christian times.

Tolstoy is one of the most important Christian anarchists in history, yet his views on Christianity were anything but typical. For example, he regarded the various Christian churches as totally corrupt and as the propagators of false and spurious doctrines that only helped the dominant elites to retain their hold on political, social, and economic power while oppressing the great mass of the people. Self-serving members of the upper crust were, in his eyes, willing to avert their eyes from the truth, especially the Truth of Christianity as expressed above all by the Sermon on the Mount. This sermon, indeed, seems to have amounted to not only the heart of Tolstoy’s Christianity, but to the bulk of it, as well. For him, Christianity was above all a commitment to love others as one’s self and to abstain from the use of force and violence, even in resistance to evil or in self-defense. Thus, as a Christian anarchist, he comes close to occupying a class of his own (though not quite all his own).

I plan to write at greater length about Tolstoy’s fascinating book for a future “Etceteras” feature in The Independent Review. Aside from its interest as a manifesto for Christian pacifism and anarchism, the book contains many anticipations of ideas later developed in economics and public choice, and it deserves much greater attention in these regards than it has previously received.