An Appeal for More Whistleblowers

As more and more secrecy envelopes the U.S. government – with millions of hidden records concealing both past and present – there is no practical alternative for democracy but to fight back with “unauthorized” disclosures, as Norman Solomon explains in an appeal for more whistleblowers.

Blowing the whistle on wrongdoing creates a moral frequency that vast numbers of people are eager to hear. We don’t want our lives, communities, country and world continually damaged by the deadening silences of fear and conformity.

I’ve met many whistleblowers over the years, and they’ve been extraordinarily ordinary. None were applying for halos or sainthood. All experienced anguish before deciding that continuous inaction had a price that was too high. All suffered negative consequences as well as relief after they spoke up and took action. All made the world better with their courage. 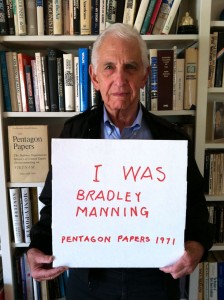 Whistleblowers don’t sign up to be whistleblowers. Almost always, they begin their work as true believers in the system that conscience later compels them to challenge.

“It took years of involvement with a mendacious war policy, evidence of which was apparent to me as early as 2003, before I found the courage to follow my conscience,” Matthew Hoh recalled this week. “It is not an easy or light decision for anyone to make, but we need members of our military, development, diplomatic and intelligence community to speak out if we are ever to have a just and sound foreign policy.”

Hoh describes his record this way: “After over 11 continuous years of service with the U.S. military and U.S. government, nearly six of those years overseas, including service in Iraq and Afghanistan, as well as positions within the Secretary of the Navy’s Office as a White House Liaison, and as a consultant for the State Department’s Iraq Desk, I resigned from my position with the State Department in Afghanistan in protest of the escalation of war in 2009.”

Another former Department of State official, the ex-diplomat and retired Army colonel Ann Wright, who resigned in protest of the Iraq invasion in March 2003, joined with Hoh in a ribbon-cutting — half a block from the State Department headquarters in Washington — for a billboard with a picture of Pentagon Papers whistleblower Daniel Ellsberg. Big-lettered words begin by referring to the years he waited before releasing the Pentagon Papers in 1971.

“Don’t do what I did,” Ellsberg says on the billboard. “Don’t wait until a new war has started, don’t wait until thousands more have died, before you tell the truth with documents that reveal lies or crimes or internal projections of costs and dangers. You might save a war’s worth of lives.”

The billboard – sponsored by the ExposeFacts organization, which launched this week — will spread to other prominent locations in Washington and beyond. As an organizer for ExposeFacts, I’m glad to report that outreach to potential whistleblowers is just getting started. (For details, visit ExposeFacts.org.)

We’re propelled by the kind of hopeful determination that Hoh expressed the day before the billboard ribbon-cutting when he said: “I trust ExposeFacts and its efforts will encourage others to follow their conscience and do what is right.”

The journalist Kevin Gosztola, who has astutely covered a range of whistleblower issues for years, pointed this week to the imperative of opening up news media.

“There is an important role for ExposeFacts to play in not only forcing more transparency, but also inspiring more media organizations to engage in adversarial journalism,” he wrote. “Such journalism is called for in the face of wars, environmental destruction, escalating poverty, egregious abuses in the justice system, corporate control of government, and national security state secrecy. Perhaps a truly successful organization could inspire U.S. media organizations to play much more of a watchdog role than a lapdog role when covering powerful institutions in government.”

Overall, we desperately need to nurture and propagate a steadfast culture of outspoken whistleblowing. A central motto of the AIDS activist movement dating back to the 1980s – Silence = Death – remains urgently relevant in a vast array of realms. Whether the problems involve perpetual war, corporate malfeasance, climate change, institutionalized racism, patterns of sexual assault, toxic pollution or countless other ills, none can be alleviated without bringing grim realities into the light.

“All governments lie,” Ellsberg says in a video statement released for the launch of ExposeFacts, “and they all like to work in the dark as far as the public is concerned, in terms of their own decision-making, their planning — and to be able to allege, falsely, unanimity in addressing their problems, as if no one who had knowledge of the full facts inside could disagree with the policy the president or the leader of the state is announcing.”

Ellsberg adds: “A country that wants to be a democracy has to be able to penetrate that secrecy, with the help of conscientious individuals who understand in this country that their duty to the Constitution and to the civil liberties and to the welfare of this country definitely surmount their obligation to their bosses, to a given administration, or in some cases to their promise of secrecy.”

Right now, our potential for democracy owes a lot to people like NSA whistleblowers William Binney and Kirk Wiebe, and EPA whistleblower Marsha Coleman-Adebayo. When they spoke at the June 4 news conference in Washington that launched ExposeFacts, their brave clarity was inspiring.

Antidotes to the poisons of cynicism and passive despair can emerge from organizing to help create a better world. The process requires applying a single standard to the real actions of institutions and individuals, no matter how big their budgets or grand their power. What cannot withstand the light of day should not be suffered in silence.

If you see something, say something.

Norman Solomon is co-founder of RootsAction.org and executive director of the Institute for Public Accuracy, which launched ExposeFacts.org in early June. His books include War Made Easy: How Presidents and Pundits Keep Spinning Us to Death.