Encrypted Gmail. Transparency from mobile providers. Maybe even a legal ‘revolt’ against ‘Orwellian’ surveillance. But until we get real reform, NSA and Co may survive in the shadows. 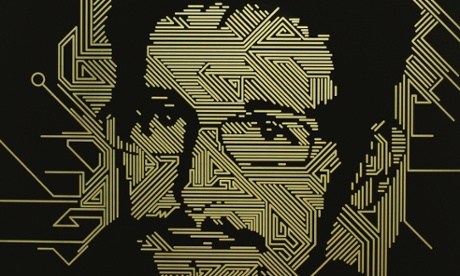 During the first weeks of the Snowden revelations, it wasn’t clear legislators cared. Then public opinion changed, and now there’s a bill. Will we ever get real reform? Illustration: Kyle Bean for the Guardian

Today, Thursday [5 Jun 2014] marks one year since the Guardian published the first in a series of eye-opening stories about surveillance based on documents provided by Edward Snowden. The events in the 52 weeks since have proven him to be the most significant whistleblower in American history – and have reverberated throughout the world.

But along with the changes Snowden sparked, vital questions remain about how and if the National Security Agency and its global spy apparatus will truly be reformed. Many wheels are finally in motion, but will the US Congress and the courts actually respond in a meaningful way? In truth, the second year of Snowden may be more important than the first. It’s when we’ll see if global privacy rights get protected for the better – or if mass surveillance becomes more entrenched in our laws than ever before. For now, it’s important to take stock in looking ahead to the next chapter.

The internet companies: more transparency, but little lobbying for reform

Since the second day of the Snowden revelations, when both the Guardian and Washington Post revealed the now-infamous Prism program, the tech giants of Silicon Valley and beyond have been scrambling to rescue their reputations with users around the world.

Many companies have made admirable changes to start honestly fighting for user privacy rights, rather than just uttering platitudes meant to satisfy PR obligations. Most of the major US-based internet stalwarts – from Google and Facebook to Apple and Microsoft – have now changed their legal policies to notify users whenever possible of surveillance requests. Some of them have even publicly challenged the government in the Foreign Intelligence Surveillance (Fisa) court to allow them to be more transparent – even if they arguably got a bad deal. And more still have finally been pushing back against pernicious national security letters in court.

We still don’t know how much these companies, which have so much control over our online lives, will push back on proposed surveillance legislation, but it’s needed now more than ever. Google has been the strongest on the lobbying front – just last week it sent an email to millions of subscribers imploring them to tell Congress to pass “real surveillance reform urgently”. But there’s been barely a peep from the other companies, most notably Facebook – Mark Zuckerberg has complained in public, but the social network has shown little will to fight behind the scenes in DC, despite the hollow bill now moving forward to the US Senate at a rapid pace.

The telecommunications companies, most notably AT&T and Verizon, have always been the true problem. After all, it was AT&T that originally got sued by the Electronic Frontier Foundation (EFF, my former employer) in 2006 for criminally allowing the NSA to copy huge portions of its internet traffic in secret. But even the two phone giants could not fully avoid the Snowden Effect. After shareholders threatened lawsuits, they both decided to release transparency reports to customers after years of resisting, and Verizon made a half-hearted attempt to challenge the phone dragnet program. Will they ever viably push back on NSA surveillance? For the NSA’s number-one corporate partners, that seems unlikely – but then again, a year ago it seemed impossible.

Encryption and cybersecurity: private Gmail, chat and whistleblowing – but a comeback for an ugly bill? 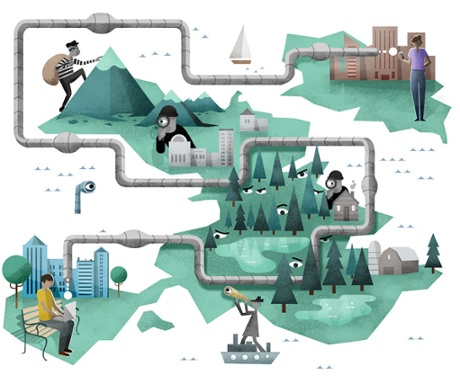 ‘The important thing is that both sides of an email exchange need to support encryption for it to work,’ Google said in its Tuesday [3 Jun 2014] announcement of an end-to-end encryption plug-in. ‘Gmail can’t do it alone.’ Illustration via Google

Undoubtedly Snowden’s biggest tangible impact has been on the security of ordinary internet users. After shocking stories of the NSA vacuuming up hundreds of thousands of buddy lists from Yahoo, breaking into the data links in between Google’s servers, and having a disturbingly close relationship with Microsoft’s product teams, service providers have raced to prove which can protect their users’ data better. Yahoo, after years of being the joke of security researchers, hired a top security expert and shored up its systems in multiple ways. Google, after two of its employees “exploded in profanity” upon hearing about one of the NSA stories, has not only led the way in providing encryption in all aspects of its service, but just announced on Tuesday night that it will begin to provide a truly end-to-end email encryption plug-in – and that it will be naming and shaming other companies who don’t encrypt messages sent between different email providers. As Microsoft chief lawyer wrote on Wednesday, “much more needs to be done”.

After Glenn Greenwald almost missed out on the story of a lifetime for not having set-up PGP email encryption, more journalists than ever now have set up more secure methods for sources to contact them. News organizations are adopting SecureDrop, the open-source whistleblower submission system from the Freedom of the Press Foundation (my current employer, where Snowden sits on our board of directors). And privacy has become a business model for many start-ups.

Meanwhile, the Cyber Intelligence Sharing and Protection Act (Cispa), an “information sharing” bill that purportedly would address cybersecurity, was indefinitely shelved thanks to the Snowden leaks. The intelligence community has decried the hold-up, but the reconsideration of this ill-thought out, privacy-destroying legislation was probably the most underrated, positive affect Snowden has had in Congress. The bill, which was universally condemned by civil liberties advocates when it passed the House in 2012 and 2013, would have given the NSA even more access to Americans’ personal data – along with more immunity to the companies who would have free reign to hand over that data to the spy agency.

Of course, this bill could rear its ugly head again in the next year. The intelligence committees seem to threaten the return a new version of Cispa every few weeks. And given that a fear-mongering climate around cyberattacks is just now ratcheting up to mainstream rhetoric and indictments, there’s no way it will stay in the background forever.

Think about how far we’ve come since last June in the letter of the law: a year ago, all but one NSA lawsuit filed during the Bush years had been thrown out of court for various procedural reasons. The government wouldn’t even release the number of pages they had on their secret interpretation of the Patriot Act, let alone any content.

Cut to a year later: multiple major lawsuits challenging key portions of the NSA’s powers are now alive and well. The first judge to rule on the mass phone metadata surveillance program in an adversarial proceeding called it “almost Orwellian” and “likely unconstitutional”. We learned the Justice Department undoubtedly lied to the US supreme court last year. Court orders in multiple Freedom of Information Act cases have pried loose hundreds of pages of previously secret Fisa court rulings, including one declaring a part of NSA’s surveillance apparatus unconstitutional. What has been called “the magistrate’s revolt” is now beginning among judges in lower courts, where there is a renewed interest in pushing back on government claims and invoking the Fourth Amendment. (Internationally, the UN started an investigation into NSA and GCHQ practices, and on Wednesday, German prosecutors announced the opening of a criminal inquiry into bulk spying on Germany’s citizens – and the tapping of Chancellor Angela Merkel’s phone.)

But still: will judges from the states on up be brave enough to really reign in the NSA’s surveillance programs? With Congress refusing to produce anything beyond watered-down reform bills, the third branch might still be the best hope to restore the very rights for which Snowden has been fighting. We can’t expect the NSA to go down easy. In perhaps the most important privacy case on a federal court docket, EFF just accused the NSA of destroying years of evidence of illegal surveillance in direct violation of their obligations to the court.

Public opinion: from ‘what’s the NSA?’ to ‘down with Prism’ … and then?

Undoubtedly it’s been the voice of the people that has pushed the companies, the courts and Congress to move. It’s pretty easy to forget now, but during those first couple weeks of the Snowden revelations, when many Americans were just finding out what the NSA even was, it wasn’t clear Congress cared about doing much of anything at all. Representatives didn’t start making noise until the polls started coming out showing a sea change in the way Americans view privacy, how much bipartisan opposition there was to the phone surveillance program, and that a large portion of the country that saw Snowden as a whistleblower. And for the first time since 9/11, more Americans are concerned about civil liberties than terrorism.

While the pollsters themselves have slowed on these questions in recent months, there’s no sign that Americans are changing their minds. A recent Yougov poll showed 55% of employed adults agreed the Prism program should have been made public.

This windfall from Americans has led, more directly than you think, to two-dozen reform bills getting introduced by their elected representatives, to two presidential commissions that recommended broad changes to the structure and power of the NSA, to pushback from judges we haven’t seen in years. All three branches, after at least partially sanctioning the status quo in secret, have called for various levels of reform to surveillance on you. This is the power of whistleblowing. This is why you have Ed Snowden to thank.

But with no legislative reform yet, the fight is far from over. As Snowden said around the six-month anniversary of his leaks, “I didn’t want to change society. I wanted to give society a chance to determine if it should change itself.” In the coming year, the public will have to decide: are you willing to continue to fight for real and permanent change, or will the NSA sink back into the shadows, allowed to continue its mass surveillance, largely unabated, until the next Snowden comes along?