Child labor has been common in a nation that ranks as one of the poorest in the Americas. 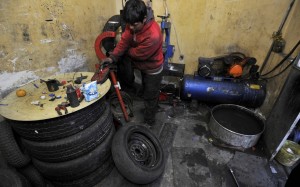 While most of the world is trying to diminish child labor, Bolivia has become the first nation to legalize it for children as young as 10 years old. Congress approved the legislation early this month, and Vice President Alvaro Garcia signed it into law Thursday [17 Jul 2014] in the absence of President Evo Morales, who was traveling.

The bill’s sponsors say lowering the minimum work age from 14 simply acknowledges a reality: Many poor families in Bolivia have no other choice than for their kids to work. However, the bill, they say, does offer working children safeguards.

“Child labor already exists in Bolivia, and it’s difficult to fight it. Rather than persecute it, we want to protect the rights and guarantee the labor security of children,” said Sen. Adolfo Mendoza, one of the bill’s sponsors.

Under the legislation, 10-year-olds will be able to work as long as they are under parental supervision and also attend school. It sets 12 as the minimum age for a child to work under contract. Those children would also have to attend school.

“To eliminate work for boys and girls would be like eliminating people’s social conscience,” Morales said in December in support of unionized young workers who marched on Congress to prevent it from ratifying a bottom-end work age of 14.

“The president gave us his support. He also worked as a boy, herding llamas,” Rodrigo Medrano, head of the Union of Boy, Girl and Adolescent Workers, told The Associated Press. He said there is no alternative in a society where half the population is poor.

“Bolivia’s move is out of step with the rest of the world,” she said. “Child labor may be seen as a short-term solution to economic hardship, but is actually a cause of poverty.”

Becker said people who start work as children end up with less education and lower earnings as adults. They are then more likely to send their own children to work, perpetuating the cycle of poverty.

Bolivia should instead invest in ways to lift families out of poverty, she said. It already does in a limited way, paying a per-child subsidy of $28 a year to families whose children attend school.

It also runs against the regional current. Mexico has set age 15 as the minimum and Chile age 16, Moreno said.

The U.N. agency says child labor is down one-third globally since 2000, with Latin America and the Caribbean together now accounting for just 13 million of the planet’s estimated 168 million working children.

A 2008 study done by the ILO and Bolivian government found that 850,000 children ages 5 to 17 were working in Bolivia, roughly half in the countryside and half in the cities. Nearly 9 in 10 were in the worst kinds of jobs, including sugar cane harvesting and underground mining, a proven life shortener.

More recent statistics are lacking, but it’s estimated that 1 million Bolivian children work regularly, accounting for 15 percent of the workforce. They toil in textiles, on farms and as street vendors, coca leaf pickers and porters at markets.

For Alicia, a childhood of play and leisure is not an option, especially since her father died two years ago. She says some days she is so tired from standing constantly that studying is difficult.

“There are days when I want to go out and have fun like those children I see go to the movie theater, but I see the effort my mother makes and I forget about all that,” she said. “How can I rest when she doesn’t?”