C.S. Lewis on Suffering and What It Means to Have Free Will in a Universe of Fixed Laws

“Try to exclude the possibility of suffering which the order of nature and the existence of free wills involve, and you find that you have excluded life itself.” 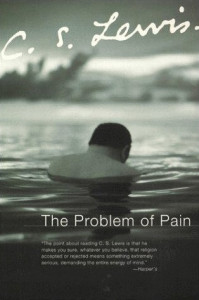 If the universe operates by fixed physical laws, what does it mean for us to have free will? That’s what C.S. Lewis considers with an elegant sidewise gleam in an essay titled “Divine Omnipotence” from his altogether fascinating 1940 book The Problem of Pain (public library) — a scintillating examination of the concept of free will in a material universe and why suffering is not only a natural but an essential part of the human experience. Though explored through the lens of the contradictions and impossibilities of belief, the questions Lewis raises touch on elements of philosophy, politics, psychology, cosmology, and ethics — areas that have profound, direct impact on how we live our lives, day to day.

He begins by framing “the problem of pain, in its simplest form” — the paradoxical idea that if we were to believe in a higher power, we would, on the one hand, have to believe that “God” wants all creatures to be happy and, being almighty, can make that wish manifest; on the other hand, we’d have to acknowledge that all creatures are not happy, which renders that god lacking in “either goodness, or power, or both.”

To be sure, Lewis’s own journey of spirituality was a convoluted one — he was raised in a religious family, became an atheist at fifteen, then slowly returned to Christianity under the influence of his friend and Oxford colleague J.R.R. Tolkien. But whatever his religious bent, Lewis possessed the rare gift of being able to examine his own beliefs critically and, in the process, to offer layered, timeless insight on eternal inquiries into spirituality and the material universe that resonate even with those of us who fall on the nonreligious end of the spectrum and side with Carl Sagan on matters of spirituality.

There is no reason to suppose that self-consciousness, the recognition of a creature by itself as a “self,” can exist except in contrast with an “other,” a something which is not the self. . . . The freedom of a creature must mean freedom to choose: and choice implies the existence of things to choose between. A creature with no environment would have no choices to make: so that freedom, like self-consciousness (if they are not, indeed, the same thing), again demands the presence to the self of something other than the self.

What makes Lewis’s reflections so enduring and widely resonant is that, for all his concern with divinity, he cracks open the innermost kernel of our basic humanity, in relation to ourselves and to one another:

People often talk as if nothing were easier than for two naked minds to “meet” or become aware of each other. But I see no possibility of their doing so except in a common medium which forms their “external world” or environment. Even our vague attempt to imagine such a meeting between disembodied spirits usually slips in surreptitiously the idea of, at least, a common space and common time, to give the co- in co-existence a meaning: and space and time are already an environment. But more than this is required. If your thoughts and passions were directly present to me, like my own, without any mark of externality or otherness, how should I distinguish them from mine? And what thoughts or passions could we begin to have without objects to think and feel about? Nay, could I even begin to have the conception of “external” and “other” unless I had experience of an “external world”? 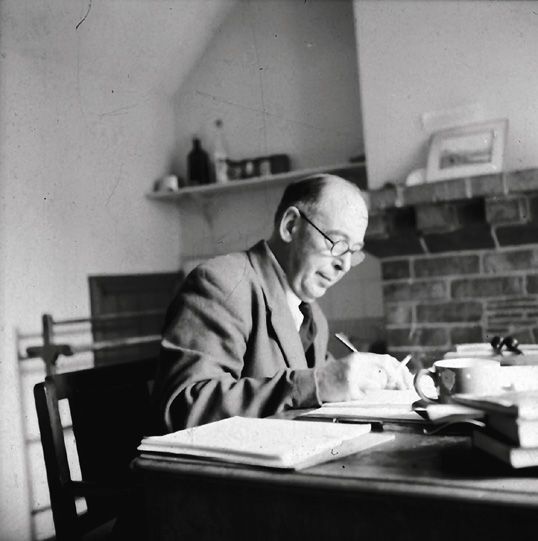 In a sentiment that calls to mind novelist Iris Murdoch’s beautiful definition of love (“Love is the very difficult understanding that something other than yourself is real.”), Lewis adds:

The result is that most people remain ignorant of the existence of both. We may therefore suppose that if human souls affected one another directly and immaterially, it would be a rare triumph of faith and insight for any one of them to believe in the existence of the others.

Lewis considers what it would take for us to fully acknowledge and contact each other’s otherness, to bridge the divide between the internal and the external:

What we need for human society is exactly what we have — a neutral something, neither you nor I, which we can both manipulate so as to make signs to each other. I can talk to you because we can both set up sound-waves in the common air between us. Matter, which keeps souls apart, also brings them together. It enables each of us to have an “outside” as well as an “inside,” so that what are acts of will and thought for you are noises and glances for me; you are enabled not only to be, but to appear: and hence I have the pleasure of making your acquaintance.

Society, then, implies a common field or “world” in which its members meet. 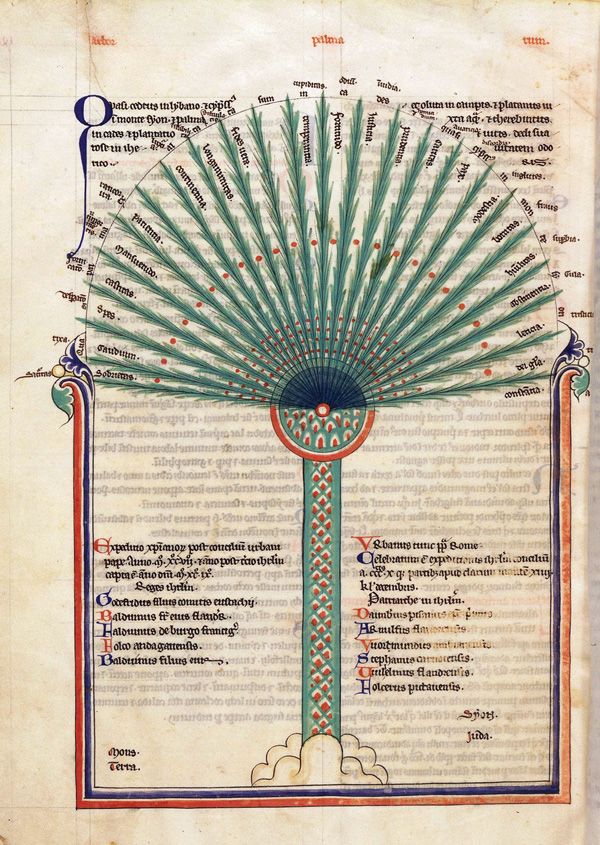 That “neutral something” might sound a lot like faith, but Lewis is careful to point out the limitations of such traditional interpretations and to examine how this relates to the question of suffering:

If matter is to serve as a neutral field it must have a fixed nature of its own. If a “world” or material system had only a single inhabitant it might conform at every moment to his wishes — “trees for his sake would crowd into a shade.” But if you were introduced into a world which thus varied at my every whim, you would be quite unable to act in it and would thus lose the exercise of your free will. Nor is it clear that you could make your presence known to me — all the matter by which you attempted to make signs to me being already in my control and therefore not capable of being manipulated by you.

Again, if matter has a fixed nature and obeys constant laws, not all states of matter will be equally agreeable to the wishes of a given soul, nor all equally beneficial for that particular aggregate of matter which he calls his body. If fire comforts that body at a certain distance, it will destroy it when the distance is reduced. Hence, even in a perfect world, the necessity for those danger signals which the pain-fibres in our nerves are apparently designed to transmit. Does this mean an inevitable element of evil (in the form of pain) in any possible world? I think not: for while it may be true that the least sin is an incalculable evil, the evil of pain depends on degree, and pains below a certain intensity are not feared or resented at all. No one minds the process “warm — beautifully hot — too hot — it stings” which warns him to withdraw his hand from exposure to the fire: and, if I may trust my own feeling, a slight aching in the legs as we climb into bed after a good day’s walking is, in fact, pleasurable.

Yet again, if the fixed nature of matter prevents it from being always, and in all its dispositions, equally agreeable even to a single soul, much less is it possible for the matter of the universe at any moment to be distributed so that it is equally convenient and pleasurable to each member of a society. If a man traveling in one direction is having a journey down hill, a man going in the opposite direction must be going up hill. If even a pebble lies where I want it to lie, it cannot, except by a coincidence, be where you want it to lie. And this is very far from being an evil: on the contrary, it furnishes occasion for all those acts of courtesy, respect, and unselfishness by which love and good humor and modesty express themselves. But it certainly leaves the way open to a great evil, that of competition and hostility. And if souls are free, they cannot be prevented from dealing with the problem by competition instead of courtesy. And once they have advanced to actual hostility, they can then exploit the fixed nature of matter to hurt one another. The permanent nature of wood which enables us to use it as a beam also enables us to use it for hitting our neighbor on the head. The permanent nature of matter in general means that when human beings fight, the victory ordinarily goes to those who have superior weapons, skill, and numbers, even if their cause is unjust.

But looking closer at the possible “abuses of free will,” Lewis considers how the fixed nature of physical laws presents a problem for the religious notion of miracles — something he’d come to examine in depth several years later in the book Miracles, and something MIT’s Alan Lightman would come to echo several decades later in his spectacular meditation on science and spirituality. Lewis writes:

Such a world would be one in which wrong actions were impossible, and in which, therefore, freedom of the will would be void; nay, if the principle were carried out to its logical conclusion, evil thoughts would be impossible, for the cerebral matter which we use in thinking would refuse its task when we attempted to frame them. All matter in the neighborhood of a wicked man would be liable to undergo unpredictable alterations. That God can and does, on occasions, modify the behavior of matter and produce what we call miracles, is part of Christian faith; but the very conception of a common, and therefore stable, world, demands that these occasions should be extremely rare.

He offers an illustrative example:

In a game of chess you can make certain arbitrary concessions to your opponent, which stand to the ordinary rules of the game as miracles stand to the laws of nature. You can deprive yourself of a castle, or allow the other man sometimes to take back a move made inadvertently. But if you conceded everything that at any moment happened to suit him — if all his moves were revocable and if all your pieces disappeared whenever their position on the board was not to his liking — then you could not have a game at all. So it is with the life of souls in a world: fixed laws, consequences unfolding by causal necessity, the whole natural order, are at once limits within which their common life is confined and also the sole condition under which any such life is possible. Try to exclude the possibility of suffering which the order of nature and the existence of free wills involve, and you find that you have excluded life itself.

He closes by bringing us full-circle to the concept of free will:

Whatever human freedom means, Divine freedom cannot mean indeterminacy between alternatives and choice of one of them. Perfect goodness can never debate about the end to be attained, and perfect wisdom cannot debate about the means most suited to achieve it.

The Problem of Pain is a pause-giving read in its entirety. Complement it with Lewis on duty, the secret of happiness, and writing “for children” and the key to authenticity in all writing, then revisit Jane Goodall on science and spirituality.

One Response to “C.S. Lewis on Suffering and What It Means to Have Free Will in a Universe of Fixed Laws”