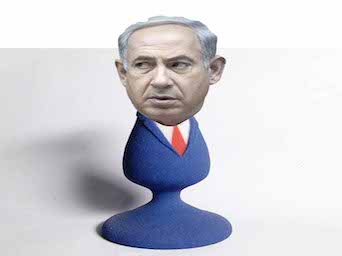 Osama Gil-laden in Jerusalem – Avi Dichter, former head of the Israel Security Agency and homefront defense minister, declared earlier this week that “there is no Iron Dome against the terror tunnels.” The message is devastatingly clear; the Jewish people are now attacked from below – the bottom front is bare and widely open. This development is regarded in Israel as a serious intelligence blunder. It needs to be addressed immediately. More than a few Israeli politicians and commentators call for a probe of the failure of Israel intelligence once Operation Protective Edge comes to its conclusion.

In the last decade Israel has surrounded itself with walls of security.  The Jewish sky is also covered by a dome of iron. But the promised soil that waited for two millennia to be redeemed by its true and only owners, is threatened to be plundered, once again, by a new wave of Gazan  insurgents who dig their way into our heartland land from in beneath.

But the Palestinians were naïve if they, even for one second, believed that the Jewish Genius was going to be intimidated by this new form of Islamo-Tunnelism. The Israeli defense ministry was quick to gather some ideas. Earlier this week it presented the cabinet with a few operative solutions.

Sarah Toddler, the secretary of the Kindergarten Teachers Union (KTU)  and the author of the worldwide progressive best seller Poopoo-Kaka-Weewee-Pipi  was amongst the first experts to be invited to the meeting. The experienced early-age educator suggested to wrap Israel’s bottom with a nappie (diaper). “Such a solution’, she said,  “would provide us with security but also a sense of relative comfort.”  Minister Naftali Bennett, famous for his hard-core nationalist inclinations was very supportive, he argued that such an idea, wrapping the Jewish State with a diaper may even “fuel Zionism with a sense of new begging.”

But truth must be said, with all due respect to Mrs Toddler, her suggestion didn’t stand a much of a chance.  Far more creative was Moishe Feiga’le, currently, Israel’s LGBT minister and a member of the Israeli Lick Party. “Unlike our reactionary, backward  neighbours”, said Feiga’le, “we the Jews are tolerant and open.  Israel must seek the support of its extensive patriotic Gay community, after all, Tel Aviv is the world’s gay capital and this time, it is our bottom that is aching.” The cabinet followed Feiga’le advice and a meeting was set the following morning at shelter near Picca-Dildo, Tel Aviv’s most famous  Sex Shop.

Far from being surprising, the Israeli Gay leaders saved Israel once again. Butt-Plug was their answer. “The Jewish homeland needs to seal its bottom and there is only one cheap method to do so” said Yossef Pillowbiter . It goes without saying that the idea was opposed by the usual suspects: ministers Avigdor Liberman and Eli Yishai known for their conservative and backward worldview. But Feiga’le and Pillowbitter anticipated  opposition and were well prepared. They provided the cabinet members with a verity of plugs provided that they are returned within 24 hours and clean. Surprise? Not really, we learn this evening from Government spokesman Mark Regev that both Lieberman and Yishai are now considering the new idea positively and seriously and even asked to extend the plug trial period by another 48 hours.