For Many Asian LGBT Youth, Homophobia Starts at Home 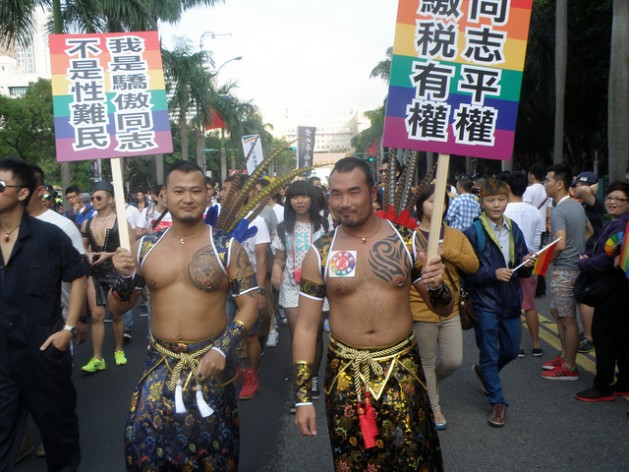 Two marchers in Taiwan`s 11th annual LGBT Pride March in Taipei City Oct. 26 affirm that “I am proud to be gay; I’m not a sex refugee!” Credit: Dennis Engbarth/IPS

Jul 28 2014 – To teenagers, running away can seem like the easiest answer to problems at home, but for Alex* it was his only option when his family refused to accept that he identified as a transgender male.

Although physically born a female, Alex always knew that he was a boy, but he grew up in an extremely homophobic and transphobic environment in Malaysia.

“One of my first memories was of my grandmother when she sort of chastised me for peeing standing up. She kept beating me and saying ‘Be like a girl, be like a girl’,” Alex told IPS.

Alex and people in Asia who identify as lesbian, gaym, bisexual, or transsexual (LGBT) often find themselves victims of violence from family members, who in fact are often the main perpetrators, according to a recent report by the International Gay and Lesbian Human Rights Commission (IGLHRC).

The report interviewed people from Malaysia, Japan, Sri Lanka, Pakistan and the Philippines over three years.

The high level of violence from family members was one of seven key findings and had the greatest impact on the victims. This violence was not only physical, but also emotional and sexual.

At 17, when Alex’s parents found out he had a girlfriend, they restricted his movements and took to physical abuse.

“They started controlling my movements, and Internet and phone usage. I could not go anywhere without somebody knowing where I was going and it was very saddening,” the 27-year-old student said.

“When my dad found out about my new passport, he confronted me and slapped me. He said it was his house and his rules. If I could not follow them then I should leave, and I did because I could not take it anymore.”

Grace Poore, IGLHRC’s Asia programme coordinator and the main coordinator of the research project, said that because of the violence from family along with discrimination from outside perpetrators there was no relief for the individuals.

“What stood out was that in countries that had a dominant religion, and where it was being enforced in a way where people’s dignity, people’s rights and ability to be different [was not respected], there was definitely greater violence. Whatever was going on outside the family seemed to be mirrored or reflected back within the family,” Poore told IPS.

“At the time I felt betrayed, it was the time when I needed my parents the most and they were not there for me. They chose to turn their backs on me,” Alex said.

The report also found that there is limited to no counselling or sheltering services for LGBT people in each country. Shelters that are LGBT-friendly cannot openly advertise as such for fear of being shut down by the government and facing a possible backlash from the community.

In Malaysia, the government has an official religious department where monitors roam the streets to oversee and enforce Sharia and Islamic law for Malay people. Pakistan also has religious police, as do at least 15 other countries worldwide.

“The education ministry of each state [in Malaysia] asks teachers to identify effeminate boys. They are then rounded up and sent to camps for religious instruction,” Poore said.

More than 70 countries have laws that criminalise homosexuality, with punishment ranging from imprisonment to execution.

The Philippines also has an equal protection clause in the Bill of Rights that technically protects all citizens. The other countries have no laws prohibiting violence and discrimination against a person due to their sexual orientation or gender identity.

U.N. Secretary-General Ban Ki-moon made a statement on May 15 calling for LGBT equality and highlighted the U.N. Office of the High Commissioner of Human Rights’s (OHCHR) “Free and Equal Campaign”.

“Human rights are for everyone, no matter who you are or whom you love,” Ban said.

Toiko Kleppe, a human rights officer for OHCHR on LGBT, told IPS that the campaign that was launched in July 2013 is the U.N.’s first against homophobia for LGBT equality.

“Its purpose is for public information and education. The message we are getting out is that LGBT people are like anybody else. The only difference is how they feel about specific things, who they choose to spend their life with or how they identify their gender,” Kleppe said.

Since the release of the report in May there has been a high level of shock from readers about the results, Poore said. IGLHRC plans to keep raising awareness and education about the issue through webinars, cross-country and multi-city tours.

After spending six years overseas, Alex returned to Malaysia in 2011 and found a supportive circle within the LGBT community. However, he is still estranged from his father.

“It has been nearly nine years and whenever I go back [home] my dad pretends I don’t exist. He rarely talks to me,” Alex said.

*Name has been changed to protect his identity.