Pointing at photographs of two former Khmer Rouge leaders a day after they were sentenced to life in prison, history teacher Ung Ratha asks his students whether justice was served. 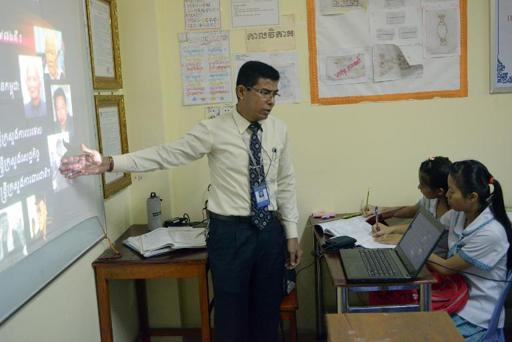 One volunteers the punishment was too lenient, as others in the class try to grasp how Cambodia’s “Killing Fields” era, once whitewashed from textbooks, left up to two million people dead.

“Some students do not believe it happened because their parents were born after the regime. So they feel that the teachers are making it up,” said Ratha, 43.

But having lived through the Khmer Rouge’s brutal 1975-1979 rule, he brings a first-hand account to lessons which only became compulsory for high school students three years ago.

The students flinch when Ratha shows them images of skulls from execution sites, before turning to the first-ever convictions of top ex-leaders to bring this gruesome period of history up to date.

“The verdicts taught me more about the leaders of the Khmer Rouge, the torture and other things they did,” said Khun Monalisa, 18, a final year student at Beltei International School in Phnom Penh.

She has been following the case closer than many young Cambodians — more than half of the population was born after the regime was ousted — as, until recently, schools have taught little about the period.

According to the Documentation Center of Cambodia (DC-Cam), the government went on to remove all reference to the regime from school curriculums between 1993 and 2002 in an attempt at reconciliation with former cadres.

It took years of lobbying before a textbook on the period was eventually allowed in Cambodian schools in 2009, paving the way for a compulsory curriculum a few years later.

The Khmer Rouge forced more than two million people out of Cambodian cities and into rural work camps during their rule, wiping out nearly a quarter of the population through executions, starvation or overwork.

Teachers were among the prime targets of the communist regime which systematically killed former state officials and intellectuals deemed a threat to its quest to forge an agrarian utopia.

Incorporating this history into a nation still traumatised by the horrors has been a massive challenge.

As part of the moral reparations for victims awarded by the court Thursday, schools will now incorporate a new chapter in their teaching about the regime, including on the forced migrations.

“It’s no longer a story, it’s history,” Chhang said of the educational impact of the verdict, adding though that it triggered more questions than answers.

“The court was looking at individual responsibility, not the whole history of the Khmer Rouge… (The judgement) should make more students interested to find out more.”

There are no recent studies gauging youth interest in the Khmer Rouge or the court set up to try ex-leaders.

But a 2010 study by the University of California, Berkeley, showed a third of Cambodians who did not live under the regime had no knowledge of the tribunal.

Back in the history class, Ratha tells his students about the time he had to roast lizards and pluck worms out of cow dung to keep hunger at bay.

It’s a difficult period for this new generation of Cambodians to relate to — but unlike earlier batches of students they have a chance to try to learn more about their country’s past.