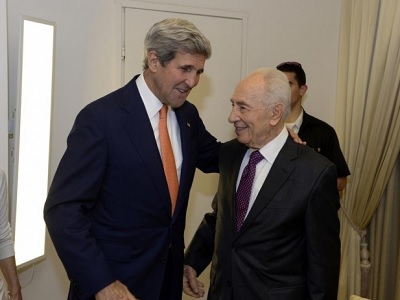 To some, US secretary of state John Kerry may have appeared to be a genuine peacemaker as he floated around ideas during a Cairo visit on 25 July [2014] about a ceasefire between Israel and Palestinian fighters in Gaza. But behind his measured diplomatic language, lies a truth not even America’s top diplomat can easily hide. His country is very much involved in fighting this dirty war on Gaza which has killed over 1,050, injured thousands more, and destroyed much of an already poor, dilapidated space that was barely inhabitable to begin with.

US War on Gaza

US economic and military aid to Israel is measured annually in the billions, and the US government continues to be Israel’s strongest and most ardent ally and political benefactor. In fact, the US-Israel “special relationship” is getting more “special” by the day even though Israel is sinking further into the abyss of a well-deserved isolation.

True, there are some, even in the justice for Palestinians camp, who speak of how exceptional and fair the Barack Obama Administration has been in comparison to its predecessors. However, they neglect the fact that aside from a few particularly strong-worded statements, Obama  has been a dedicated stalwart of Israel and copper bottoming its vision of its security by going as far as defending Israel’s ‘Operation Protective Edge’ war – the slaughter of thousands of innocent civilians in Gaza.

On 5 March, 2014, a Congressional bill – The United States-Israel Strategic Partnership Act (H.R. 938, S. 462) – declared that Israel is a “major strategic partner of the UnitedStates.” The sweeping bill covered many programs from energy, to “research pilot programs” between Israel and the US Department of Homeland Security. What is most important to note is that Congress now requires additional reports that would update the government on the US’ commitment to Israel’s Qualitative Military Edge (QME).

This is merely one of many bills and government initiatives that continue to give Israel a special undeserved status. But this military edge is used mostly to maintain Israel’s illegal military occupation. Most of Israel’s victims in its latest war on Gaza are civilians who are killed by US weapons. There is no escaping the fact that the US is a partner in the Israeli crimes in Gaza and the rest of Palestine. Without a complete reversal of US attitude towards Israel, the US will continue to lack any credibility as a peacemaker or a mere ceasefire mediator.

But America’s support for Israel is crossing new red lines. There are reportedly over 1,000 US citizens fighting in the Israeli army according to reports that are now resurfacing due to the recent killing of two US-Israeli soldiers – Max Steinberg, 24, of California, and Nissim Sean Carmeli, 21, of Texas. Like the rest of the IDF soldiers killed in recent fighting, they were killed while invading parts of the besieged Gaza Strip. But the number must be an understatement since some of Israel’s most ardent Jewish settlers are also American, and happen to be armed and dangerous. Although this is causing a bit of a media buzz, there is no political crisis. Instead, only condolences are offered to the families of the Americans fighting the genocidal war on Gaza.

The US is not alone in this. European governments display an incredible amount of hypocrisy as they continue to utilise doublespeak in their approach to Middle East conflicts in general, and the situation in Palestine in particular. The pressure mounting from European civil society makes it a bit more challenging for EU governments to endow Israel with the same unconditional love and support as that bestowed upon it by the US. EU hypocrisy is too palpable even for clever politicians to hide. The British government is shamelessly on the Israeli side, even while entire families in Gaza are being pulverized by western weapons and military technology. Meanwhile, the French government imposed a ban to prevent French society from showing its solidarity with the besieged and massacred Palestinians in Gaza.

But why ban mere demonstrations of solidarity while France, the US and other Western governments are allowing their Jewish citizens to be enlisted in the Israeli Defense Forces (IDF) which is actively killing Palestinian civilians? Shouldn’t that be a much greater concern to the duplicitous French government than some protesters chanting some slogans during a solidarity rally that may or may not be deemed anti-Semitic?

Indeed, not only are western governments providing Israel with arms, funds and political cover to sustain its occupation and war, but they are also contributing thousands of military experts and boots on the ground in order to fight a war in Gaza where war crimes and crimes against humanity are being committed on an hourly basis.

Western hypocrisy on this is as profound as the phenomenon of westerners killing Palestinians, which some are now calling ‘Israeli Jihadists’.

Belgium also stands accused of allowing such criminality. Although Belgian civil society is one of Palestine’s strongest supporters, their government is cloaked with unmistakable dishonesty. Many Belgian citizens are also taking part in Israel’s lethal wars in Gaza and military occupation of the occupied territory, with little or no protest from their government. The recruitment of Belgians is mostly done through the same organisations that recruited thousands of foreign fighters for the IDF. Think of them as terrorist headhunting organisations that operate in a perfectly legal environment.

Recently, Mayor of Antwerp, Bart De Wever, called on the Belgian government to cancel dual citizenship of ‘Syria jihadis’. His call was made during a recent visit to a synagogue in Brussels after four people were shot by an alleged French-born citizen suspected of having spent time fighting in Syria. The country’s Minister of Justice Annemie Turtelboom took the initiative further by calling on EU countries to block jihadists from going to Syria, suggesting the creation of a list of all known “Syria jihadists.”

But what about the number of Belgians who are fighting, killing and committing war crimes on behalf of Israel? Why is the Belgian government keeping silent about those in the Israeli army, with no statement yet issued, even after the killing of Belgian citizen Eytan Barak?

The French and Others

Not only is the Belgian government miserably failing to prevent Belgians from fighting in Gaza, but the mainstream media is also failing to report such events. Only alternative media seems interested in what should be a major story in Brussels.

The same questions apply to other western governments. The hyper-sensitive French government turned a blind eye when a French citizen was killed during the Gaza onslaught. While the Israeli daily Haaretz reported on the killing of staff Sgt. Jordan Bensemhoun, most of the French media and government have looked the other way. The very government that continues to make life difficult for African immigrants in France, sees no problem of its own immigrants taking part in foreign wars that are in violation of its own citizenship laws.

In fact, the French are now considering a six months ban on those travelling to Syria and Iraq, so as not to take any chances that some of them may be recruited in the ongoing strife there. As for travelling to Israel to join the IDF? Well, for Paris, that’s a whole different matter.

The list of participating countries is growing as is the number of those suspected war criminals fighting and killing in the name of Israel. This is not met with enough civil society initiatives to bring criminals to justice for the sake of exposing the organizations that recruit them, the “support groups” that sustain them, and government silence and hypocrisy that tolerate the entire criminal enterprise.

Western involvement in the war on the Palestinian people is indeed going beyond the usual and known support of funds, military technology and economic aid, to actual participation in the slaughter of Palestinians in Gaza. This is not a matter than can be addressed within the larger argument of Western double standards in Israel and Palestine, but an urgent issue that demands immediate attention.

By preventing those who leave their countries to kill Palestinians in Gaza, less civilians are likely to be murdered.

Legal cases should be brought before courts throughout western capitals to try known names of US-EU soldiers, and new lists should be composed of others who use dual citizenship status to further the suffering of the Palestinians so that legal action may immediately take place.

It is one thing to fail to stop war crimes from being committed; it is a whole other level of failure to defend, finance and take active part in carrying out these war crimes. Israeli Prime Minister Benjamin Netanyahu is not the only leader culpable of Gaza’s bloodbath; others in western capitals should also be held to account.

Thanks to Laila Benallal for her help with the research for this article.

Ramzy Baroud is a PhD scholar in People’s History at the University of Exeter. He is the Managing Editor of Middle East Eye. Baroud is an internationally-syndicated columnist, a media consultant, an author and the founder of PalestineChronicle.com. His latest book is My Father Was a Freedom Fighter: Gaza’s Untold Story (Pluto Press, London). http://www.ramzybaroud.net/