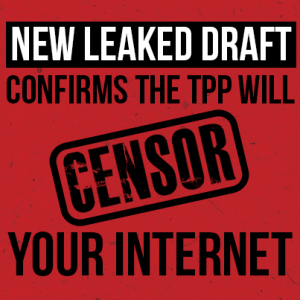 That’s according to community-based organization OpenMedia, which is leading a large international Fair Deal Coalition aimed at securing balanced copyright rules for the 21st Century.

“It is hugely disappointing to see that, yet again, Canadians – and members of the public worldwide – have to be informed about these critical issues through leaked drafts, instead of through democratic engagement on the part of governments and elected officials,” said OpenMedia Campaigns Coordinator Meghan Sali. “When will our decision-makers recognize that negotiating serious issues – especially proposals that would censor our use of the Internet – must be considered and debated democratically instead of in secret meetings with industry lobbyists?”

Sali continued, “It is now clearer than ever that we need a positive alternative to this secretive process. It is unacceptable to design and impose new laws through closed-door processes that disenfranchise individuals around the world and shut off debate on important issues that will affect all of our futures. This is what the Our Digital Future report, released just yesterday, is all about – challenging the notion that we can’t make these laws in a more democratic manner.”

This morning, copyright and digital rights expert, Prof. Michael Geist, weighed in on his blog about the most recent leaked draft, noting that the Canadian negotiators have been opposing U.S. pressure to introduce stricter enforcement for patent and copyright law – with the strongest pushback coming in the “patents, enforcement, trademarks and copyright sections.”

Geist writes on his blog: “As the treaty negotiations continue, the pressure to cave to U.S. pressure will no doubt increase, raising serious concerns about whether the TPP will force the Canadian government to overhaul recently enacted legislation that it has steadfastly defended as reflecting a balanced, “made in Canada” approach.”

With the next round of TPP negotiations taking place in Australia at the end of October, pressure is mounting on negotiators to finalize the agreement, and copyright issues are a main stumbling block to achieving the consensus needed to finish negotiations. This leaked document may contribute additional strain to already tense negotiations.

OpenMedia.ca is an award-winning community-based organization that safeguards the possibilities of the open Internet. We work toward informed and participatory digital policy by engaging hundreds of thousands of people in protecting our online rights.

Through campaigns such as StopTheMeter.ca and StopSpying.ca, OpenMedia.ca has engaged over half-a-million Canadians, and has influenced public policy and federal law.

About the Trans-Pacific Partnership Agreement:

The TPP is one of the most far-reaching international free trade agreements in history. We know from leaked TPP draft texts that participating nations would be bound to much stricter and more extreme copyright laws than now exist under current national laws. These new rules would criminalize much online activity, invade citizens’ privacy, and significantly impact our ability to share and collaborate online.

Negotiators from 12 of the TPP negotiating nations—Australia, Brunei, Canada, Chile, Japan, Peru, Malaysia, Mexico, New Zealand, Singapore, Vietnam, and the United States— are meeting in Asia this week to discuss these changes without input from the public, creators, or most businesses. The negotiating documents are classified—unless you are one of just 600 industry lobbyists permitted to participate.

U.S. negotiators are pushing hard to force smaller nations into accepting a censored Internet. However, reports have indicated that the intellectual property provisions have been quite a “challenging” issue for those behind the agreement.

Hundreds of thousands of people have supported campaigns organized by OpenMedia to speak out about Internet censorship and the secrecy surrounding the TPP.