Brisbane – A Show of Western Weakness

No matter what you may think of Putin and Russia this is simply not the way international politics should be conducted, particularly not at the personal level. If it wasn’t an offence to children, one would aptly characterise it as childish behaviour.

Western leaders ignored a brilliant opportunity to meet face-to-face with Vladimir Putin and move forward towards mutual understanding instead of signalling that they want a new Cold War.

Western leaders tell us that Russia is a ”threat to the world”. That obviously serves other purposes because you don’t bully someone you genuinely fear.

The G20 Brisbane should be remembered for its show of Western leaders’ personal display of weakness and conflict illiteracy.

CNN reports that, during the meeting, Putin took ”pummelling” and was treated as a ”punching bag” by Western leaders from he set foot on Australian soil where his Australian host had sent a deputy minister of defence to receive him.

The Guardian reports that the Russian president approached Canadian Prime Minister Harper with his hand outstretched. Harper reluctantly shook it, then said “Well I guess I’ll shake your hand, but I only have one thing to say to you: you need to get out of Ukraine.” ”Bold words” – media called it.

Footage shows Putin sitting alone at a lunch table – like a naughty school boy put in the corner as by his teachers.

President Obama said that we are ”opposing Russia’s aggression in Ukraine which is a threat to the world as we saw in the appalling shoot down in the MH-17”.

Well, if Russian mercenaries in Eastern Ukraine is enough for “aggression”, Western countries have a few more here and there. World threat? Not serious with a country that has 8% of the military expenditures of NATO and has lost its empire 25 year ago. And he knows, with sufficient hard evidence, that Russia shot that plane down?

Mockery of crisis management and diplomacy

Behaving like big boys ganging up and mobbing a smaller boy in the schoolyard – to the extent that he is leaving the place – is to make a mockery of the concept of diplomacy and professional politics.

Particularly in times of very very serious crisis where a new Cold War is very near.

It is unbecoming of statesmen, of world leaders we have a right to trust and expect know how to behave responsibly. Here they sank to the lowest gang behaviour, as arrogant as abject.

Media do their best to follow this banalisation of politics. 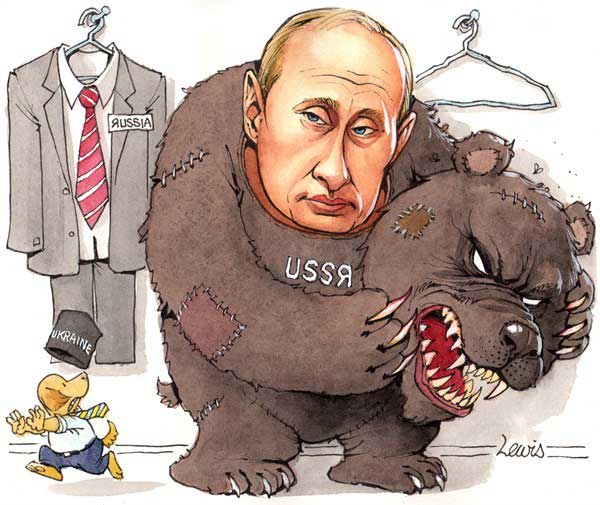 Commentators, international affairs experts and others have found this OK – after all Putin is a bad guy, right?

Well, there other ways of seeing the West as displaying weakness rather than statesmanship in all this.

Projection means transfer on someone else of what you know is bad/evil about yourself.

While NATO countries have ravaged or chopped up countries (e.g. Yugoslavia), one after the other – particularly civilisations like Iraq and Syria and bullying Iran – it must blow out of proportion the Russian annexation of Crimea.

Serbia was partly destroyed to create an independent Kosovo in which the U.S. immediately built the largest base since the war in Vietnam, Bondsteel. Thousands were killed and wounded, 800.000 fled right after the bombs began to fall and Serbs were rapidly cleansed out of Kosovo which is and will remain a failed state.

Compare that with the referendum in Crimea and compare the violations of international law in the two cases.

Or compare with the treatment of Iraq: About one million dead thanks to 13 years of sanctions, invasion, occupation and misadministration leading, as it seems now, to the division of that country (which will be blamed in the Iraqis themselves).

The West – foolishly, triumphantly – took advantage of Russia’s weakness and expanded NATO and did what could never have been done during the Soviet era – until Ukraine.

The West can’t live without enemies

Afterwards, Western leaders was at a loss finding scapegoats who could legitimate the continued existing of NATO after the Warsaw Pact dissolved and the biggest threat, the Soviet Union, had fallen apart.

For some time it was Mohamed Farah Aideed in Muqdishu, for some time Manuel Noriega (the U.S. invasion of Panama in 1989).

Saddam had to play the role of beloved dictator from August 1990 and in the early 1990s it became Slobodan Milosevic.

A classical pattern from 1989 to ISIS today: The West hates those the most that it once supported and called friends.

The Clinton administration bombed a little here and there – Madeleine Albright waking up every Monday discussing with her staff whom to appoint as favourite enemy this week.

Then came September 11, 2001 – and the war on terrorists (not terrorism) could begin – eventually appearing increasingly as Christian mission civilisatrice against Islamic culture.

Mainstream media and mainstream academia hardly ever ask whether there could be something wrong with Western culture or cosmology.

What is the reason that Western countries are by far the most bellicose states in post-1945 history with the largest military expenditures – or why the U.S. has 700 base facilities in 130 countries and permanently feels threatened – and compelled with a ”chosen people” syndrome to be The Saviour of humanity?

The U.S./NATO is today at constant war with the world – either militarily or economically or politically. Why?
Could it be that the US/NATO is not always 100% right or has a rights to lead and ‘save’ the world? – as we are being made to believe?

Divert the attention from domestic problems and Ukraine as a huge mistake?

Is the West in need perhaps of diverting the attention from its own steadily mounting domestic and regional problems? From its declining de facto global power? Does it need a lot of self-congratulatory chest-beating?

Everybody in the West seems conveniently to have forgotten that the Ukraine crisis did not start with an out-of-the-blue annexation of Crimea by Putin.

It was the US and the EU that caused it in the first place by masterminding and financing the regime change in Kiev and demanding that Ukraine choose between the EU and the Eurasian Union – to which Putin then re-acted.

Kissinger and Gorbachev – more experienced than any practising politician today – are not the only ones to see Ukraine and Western hubris as a huge mistake.

There is no doubt that the U.S. empire is getting weaker these years. No doubt that Europe is in deep crisis and lack visionary leadership. While the economic growth is around 0% there, the African continent grows with about 5% per year.

The only economic indicator that grows phenomenally is social unrest-producing economic inequality. And the peace dividend from 1989 has been squandered.

Neither can there be any doubt that others such as the BRICS countries are getting stronger – using neither Sword nor Bible.

The only power dimension on which the U.S./NATO world is still second to none is the military and, thus, that is the one mostly used.

On all other power scales – e.g. the economy (debt), culture, legitimacy, diplomacy and ability to serve as a benign, visionary model that inspires others – the arrow points down.

In summary, perhaps some of these factors were were displayed in the undignified body and verbal language in Brisbane. And the post-1989 boomerangs are coming back.

Why should BRICS and other new power centres in the emerging, regionalised and multipolar world be bothered by a grumpy ageing West whose time is running out?

And Putin, patiently putting up with the humiliation without losing his temper or dignity, surely slept well on his early plane home.