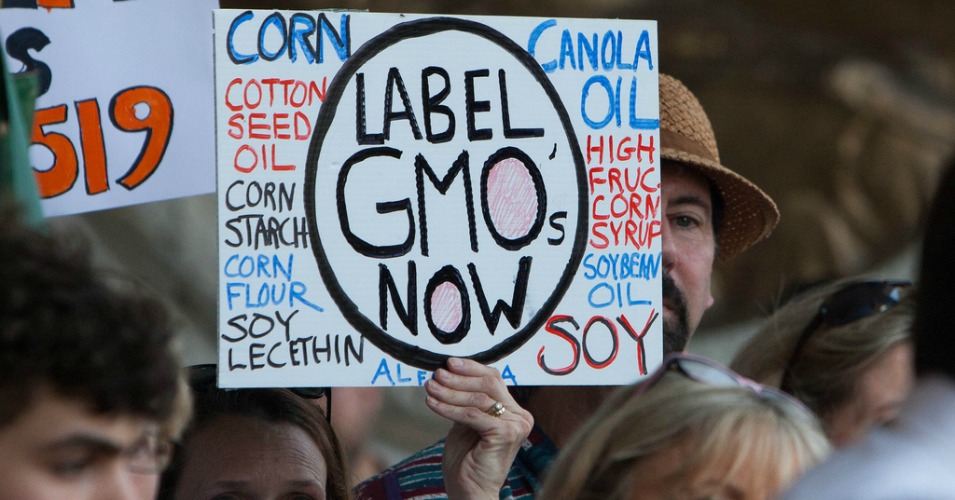 There is a growing movement for labeling of GMO crops, and many would go further and ban GMOs completely. Currently there is a close vote in Oregon on a GMO labeling initiative, with advocates for labeling 0.3% behind and raising money to check ballots (we urge your support). Those who profit from GMOs spent $20 million to prevent labeling in Oregon. Several states in the  Northeast have put in place laws that will require labeling.

Vermont is about to be sued to prevent GMO labeling. GMO profiteers have an unusual marketing strategy. While most companies brag about their product, the GMO industry spends hundreds of millions to hide their product. The US does not require labeling of GMOs despite the fact that 64 countries around the world label GMO foods.

Millions have marched against Monsanto urging labeling or the banning of GMO products. There is a national consensus in favor of labeling but the government has been unable to respond. Indeed, President Obama’s food czar is a former Monsanto executive. The deep corruption of government is putting the health of the American people at serious risk.

The research highlighted below, “Genetically engineered crops, glyphosate and the deterioration of health in the United States of America,” was published in The Journal of Organic Systems this September and links GMOs to 22 diseases with very high correlation. We reprinted many of the graphs from the study that show an incredible correlation between the rise of GMO crops that use the herbicide glyphosate and a wide range of diseases.

Glyphosate was introduced to the marketplace in 1974 but data on its use is only available since 1990. Monsanto has genetically modified foods so that they are resistant to glyphosate, a herbicide Monsanto sells, resulting in a dramatic increase in the use of glyphosate. The study points out that research has shown that “glyphosate disrupts the ability of animals, including humans, to detoxify xenobiotics. This means that exposures to the numerous chemicals in food and the environment, such as endocrine disrupting chemicals and carcinogens, could be causing levels of  damage that would not occur if the body were able to detoxify them.”

Correlation is not proof of causation. But the authors point out “we have data for 22 diseases, all with a high degree of correlation and very high significance. It seems highly unlikely that all of these can be random coincidence.” They point out that according to “the American Academy of Environmental Medicine’s position paper on genetically modified (GM) foods: ‘[S]everal animal studies indicate serious health risks associated with GM food consumption including infertility, immune dysregulation, accelerated aging, dysregulation of genes associated with cholesterol synthesis, insulin regulation, cell signaling, and protein formation, and changes in the liver, kidney, spleen and gastrointestinal system.’”

The conclusions of the study are:

“The probabilities in the graphs and tables show that it is highly unlikely that the correlations are a coincidence. The strength of the correlations shows that there is a very strong probability that they are linked somehow. The number of graphs with similar data trends also indicates a strong probability that there is a link. Although correlation does not necessarily mean causation, when correlation coefficients of over 0.95 (with p-value significance levels less than 0.00001) are calculated for a list of diseases that can be directly linked to glyphosate, via its known biological effects, it would be imprudent not to consider causation as a plausible explanation.

“We do not imply that all of these diseases have a single cause as there are many toxic substances and pathogens that can contribute to chronic disease. However, no toxic substance has increased in ubiquity in the last 20 years as glyphosate has. . . . Another critical issue is that glyphosate is an endocrine disruptor and it has been argued that there are no safe levels of endocrine disruptors. This would imply that the current permitted residue levels in food could be causing multiple health problems that have been documented in the scientific literature to be caused by endocrine  disrupting chemicals.” [Citations omitted]

A root cause of the problem is that United States’ regulatory structure is backward, making people into guinea pigs instead of protecting them. As the researchers write:

“… the regulatory approach in the US is reactionary rather than precautionary. Instead of taking preventive action when uncertainty exists about the potential harm a chemical or other environmental contaminant may cause, a hazard must be incontrovertibly demonstrated before action is initiated. Instead of requiring industry to prove the safety of their devices or chemical products, the public bears the burden of proving that a given environmental exposure is harmful.”

As to next steps, the researchers urge independent scientific research (sadly, too much research is funded by corporations that profit from GMO crops]. They write:

“The data presented in this paper highlight the need for independent scientific research to be conducted, especially in the areas of the endocrine disruption, cancer precursor, oxidative stress, gut microbiome and the Cytochrome P450 pathways. It is our hope that, in addition to more basic research in the form of toxicology and carcinogenic studies, epidemiology studies will be undertaken by experts in each of  these disease categories.”

In the meantime, people need to continue to take political action to require labeling, urge a new regulatory structure that applies the precautionary principle and urge the banning of GMO crops now that correlation to disease is being shown. There are a few things you can do to protect yourself from GMO foods: (1) Buy organic, (2) Look for the Non-GMO seal, (3) Avoid crops where GMO’s are common.

The eight GM food crops are Corn, Soybeans, Canola, Cottonseed, Sugar Beets, Hawaiian Papaya (most) and a small amount of Zucchini and Yellow Squash. Sugar is likely to contain GMO beets unless it is labeled as pure cane sugar. Dairy is also likely to be GMO unless it is labeled No rBGH, rBST, or artificial hormones. Here’s a non-GMO shopping guide for further assistance.

Below are some of the key charts from the Journal of Organic Systems study.

PLEASE GO TO ORIGINAL TO SEE ALL CHARTS – nationofchange.org