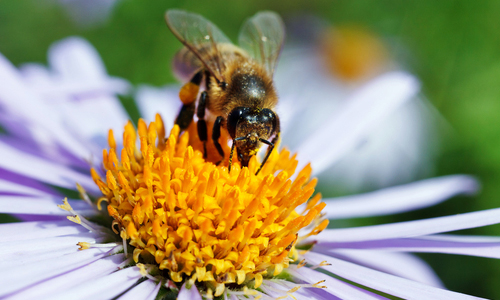 What will it take to get governments and industry to put people—and pollinators—before profits? Photo credit: Shutterstock

Honeybee populations have plummeted in recent years. Simultaneously, government and industry funds to study whether pesticides, mites, or viruses are the root cause of this problem have been granted to American and European researchers. These scientists call the disappearance of the bees “colony collapse disorder”, or CCD, though a more appropriate name would be CCC, for colony collapse catastrophe. After all, this disorder entails the disappearance of a hive’s 5,000 to 100,000 or so individuals in a few days without leaving even a trace of their bodies. CCD was first reported in Pennsylvania in 2006. The speed of the devastation in the continental United States has been astounding, with small private apiaries already becoming a thing of the past, and the honeybee (Apis mellifera) numbers dropping on average by more than 30 percent: a total of about 3 million hives. The phenomenon has spread to Canada, Central America, South America and most of Europe.

As a species, humans are about three million years old: a blink of an eye compared to the honeybees’ more than 100 million years of living in a highly egalitarian society. Honeybee hives consist mostly of sister workers who live together in wax cities of their own making. During the seasons when flowers bloom, many of these insects go out daily to forage for their foods. Typically, they collect nectar and pollen from a broad variety of flowers within a one- to seven-mile radius of their hive. When honeybees discover a good food source, they direct their sisters to it by performing a dance for their hive on their return. The discovery of this “waggle dance,” which describes the quality of the food and gives distance information as well as the angle to the food’s location with respect to the sun, was a milestone in the demonstration of intelligence in non-human animals. Even more amazing than the dance: the final decision about the best food source for the group turned out to be based on facts, discussion and consensus building.

A honeybee hive represents a tight-knit society of individuals devoted to the greater good. The workers feed a special secretion – royal jelly – to a queen who is usually the mother of the entire hive; her job is to mate with a few drones (males), lay all the eggs, and care for the larvae. In addition, the sisters prepare honey from nectar as a common store of food for leaner seasons. In places were winters are cold, bees, who cannot fly when the temperature drops below 17 C (54 F), assemble the hive into a football-shaped structure around the queen that vibrates in unison to stay at 29 C (85 F). During attacks on the hive by predators, the sisters defend their home without hesitation, although they perish if they administer a sting. In cases of illness, to prevent the spread of disease, individual bees exile themselves from the hive to die.

Have humans been good friends to the bees?

Entomologist E. O. Wilson has noted that bees are “humanity’s greatest friend among the insects.” Honeybees originated in Africa and then migrated to Europe. According to the historical record, the ancient Egyptians learned to harvest honey at least 6,000 years ago. The practice reached Europe probably through the ancient Greeks. European settlers became so fond of honey that they introduced honeybees and non-native fruit trees to the New World and other places in the early 17th century. Contrary to prejudices about non-natives, honeybees have been exemplary citizens everywhere. They are the Earth’s best pollinators by far. Without them about 90 percent of our fruits, nuts, seeds, and vegetables would disappear, leaving a bland choice of wind-pollinated grasses like rice, wheat, or corn for our plates. Fibers such as cotton and flax would also go the way of the apples, carrots, and blueberries.

The decline in honeybees is alternately blamed on the unpredictability of flowering by many plants due to climate change, the ravages of the neonicotinoid pesticides introduced in the 1990s, parasitic mites and, more recently, the viruses harbored by these mites. Were it not for several spectacular traffic accidents in 2010 and 2011, we might not have learned about the lucrative business — also started in the 1990’s — of trucking bees in the Spring by the tens of millions, to vast monocultures of fruit trees or plants such as almonds or blueberries grown by agribusiness, from a series of massive industrial hives. Nor would we have considered that the overcrowded industrialized hives represent ideal breeding grounds for parasites. Just as antibiotics are fed to chickens living in overcrowded coops, chemicals are sprayed on bees to extend their survival in the abnormally crowded industrial hives.

Currently one industrial hive costs about $100, but its price in bee misery is inestimable. Examinations of CCD hives have shown most of the insects to be afflicted with multiple infections, as if the parasites are behaving opportunistically on a depressed immune system in the honeybees. Often single insects have been discovered to be simultaneously infected by mites, bacteria, fungi and viruses. This wealth of possible causes for illness has created a real boon for researchers, whose mission is to maintain the bees’ health under the unnatural industrial conditions that are killing them. Indeed, the only solutions being seriously considered for CCD are those that involve the continued industrialization of honeybees, such as the replenishment of the populations with hives imported from Australia or the development of bees that are more robust.

One need not be an entomologist to understand that it is unethical to treat a group of social and intelligent animals as a disposable commodity to be trucked thousands of miles to pollinate nuts and berries for our pleasure and then thrown away. Although the reasons for the decline of honeybee populations are probably many, all of them relate to the scale up of farms and the industrialization of bee hives, which are hardly ever discussed. Even for those bees that dodge the infections from overcrowding, disease is bound to follow the extreme stresses of homelessness and alienation, and possibly the deficiencies that result from foraging on an industrial monoculture. Well-meaning assistance to small apiaries is of no avail because it is impossible to isolate the trucked bees from the other populations. So long as industrialized bees continue to be scattered about, infections will spread from these introduced bees to the insects from smaller local apiaries: even organic ones.

Again and again, articles about the plight of the bees remind us that their services to the world are worth many tens of billions of dollars. But isn’t the focus on money the origin of our problems? There is no substitute for bee pollination. None. In parts of China where honeybees disappeared some 30 years ago, and humans have tried to assume the pollination of fruit blossoms, this process has been laughably inefficient. While a beehive can pollinate millions of flowers per day, a small village can pollinate a few dozens trees at best. In response to demonstrations that honeybees are indeed injured by neonicotinoids, these pesticides have become restricted in parts of Europe. The future of honeybees, however, is hardly the sort of agricultural problem that can be patched up by legislation. A new ecological consciousness is needed, and fast, that will put an end to industrial bee hives. If the honeybee decline continues at its current rate, by 2035 honeybees will disappear permanently from our world, along with much of its color and fragrance.

Dady Chery is the co-Editor in Chief at News Junkie Post.