41 Men Targeted but 1,147 People Killed: US Drone Strikes – The Facts on the Ground 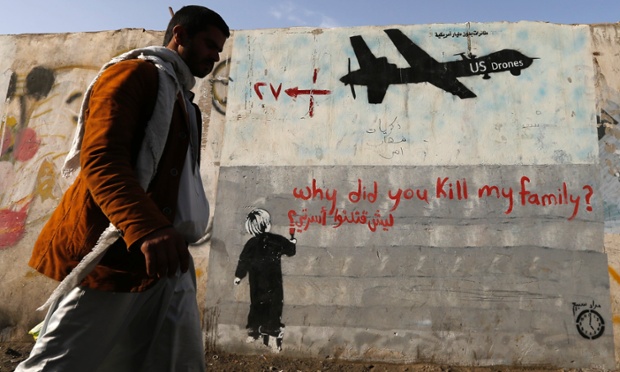 ‘Drone strikes have been sold to the American public on the claim that they’re ‘precise.’ But they are only as precise as the intelligence that feeds them.’ Photograph: Khaled Abdullah/Reuters

24 Nov 2014 – The drones came for Ayman Zawahiri on 13 January 2006, hovering over a village in Pakistan called Damadola. Ten months later, they came again for the man who would become al-Qaida’s leader, this time in Bajaur.

Eight years later, Zawahiri is still alive. Seventy-six children and 29 adults, according to reports after the two strikes, are not.

However many Americans know who Zawahiri is, far fewer are familiar with Qari Hussain. Hussain was a deputy commander of the Pakistani Taliban, a militant group aligned with al-Qaida that trained the would-be Times Square bomber, Faisal Shahzad, before his unsuccessful 2010 attack. The drones first came for Hussain years before, on 29 January 2008. Then they came on 23 June 2009, 15 January 2010, 2 October 2010 and 7 October 2010.

Finally, on 15 October 2010, Hellfire missiles fired from a Predator or Reaper drone killed Hussain, the Pakistani Taliban later confirmed. For the death of a man whom practically no American can name, the US killed 128 people, 13 of them children, none of whom it meant to harm.

A new analysis of the data available to the public about drone strikes, conducted by the human-rights group Reprieve, indicates that even when operators target specific individuals – the most focused effort of what Barack Obama calls “targeted killing” – they kill vastly more people than their targets, often needing to strike multiple times. Attempts to kill 41 men resulted in the deaths of an estimated 1,147 people, as of 24 November.

Reprieve, sifting through reports compiled by the Bureau of Investigative Journalism, examined cases in which specific people were targeted by drones multiple times. Their data, shared with the Guardian, raises questions about the accuracy of US intelligence guiding strikes that US officials describe using words like “clinical” and “precise.”

The analysis is a partial estimate of the damage wrought by Obama’s favored weapon of war, a tool he and his administration describe as far more precise than more familiar instruments of land or air power.

“Drone strikes have been sold to the American public on the claim that they’re ‘precise’. But they are only as precise as the intelligence that feeds them. There is nothing precise about intelligence that results in the deaths of 28 unknown people, including women and children, for every ‘bad guy’ the US goes after,” said Reprieve’s Jennifer Gibson, who spearheaded the group’s study.

Some 24 men specifically targeted in Pakistan resulted in the death of 874 people. All were reported in the press as “killed” on multiple occasions, meaning that numerous strikes were aimed at each of them. The vast majority of those strikes were unsuccessful. An estimated 142 children were killed in the course of pursuing those 24 men, only six of whom died in the course of drone strikes that killed their intended targets.

In Yemen, 17 named men were targeted multiple times. Strikes on them killed 273 people, at least seven of them children. At least four of the targets are still alive.

Available data for the 41 men targeted for drone strikes across both countries indicate that each of them was reported killed multiple times. Seven of them are believed to still be alive. The status of another, Haji Omar, is unknown. Abu Ubaidah al-Masri, whom drones targeted three times, later died from natural causes, believed to be hepatitis.

The data cohort is only a fraction of those killed by US drones overall. Reprieve did not focus on named targets struck only once. Neither Reprieve nor the Guardian examined the subset of drone strikes that do not target specific people: the so-called “signature strikes” that attack people based on a pattern of behavior considered suspicious, rather than intelligence tying their targets to terrorist activity. An analytically conservative Council on Foreign Relations tally assesses that 500 drone strikes outside of Iraq and Afghanistan have killed 3,674 people.

As well, the data is agnostic on the validity of the named targets struck on multiple occasions being marked for death in the first place.

Like all weapons, drones will inevitably miss their targets given enough chances. But the secrecy surrounding them obscures how often misses occur and the reasons for them. Even for the 33 named targets whom the drones eventually killed – successes, by the logic of the drone strikes – another 947 people died in the process.

There are myriad problems with analyzing data from US drone strikes. Those strikes occur under a blanket of official secrecy, which means analysts must rely on local media reporting about their aftermath, with all the attendant problems besetting journalism in dangerous or denied places. Anonymous leaks to media organizations, typically citing an unnamed American, Yemeni or Pakistani official, are the only acknowledgements that the strikes actually occur, or target a particular individual.

Without the CIA and the Joint Special Operations Command declassifying more information on the strikes, unofficial and imprecise information is all that is available, complicating efforts to independently verify or refute administration assurances about the impact of the drones.

What little US officials say about the strikes typically boils down to assurances that they apply “targeted, surgical pressure to the groups that threaten us,” as John Brennan, now the CIA director, said in a 2011 speech.

“The only people that we fire a drone at [sic] are confirmed terrorist targets at the highest level after a great deal of vetting that takes a long period of time. We don’t just fire a drone at somebody and think they’re a terrorist,” the secretary of state, John Kerry, said at a BBC forum in 2013.

A Reprieve team investigating on the ground in Pakistan turned up what it believes to be a confirmed case of mistaken identity. Someone with the same name as a terror suspect on the Obama administration’s “kill list” was killed on the third attempt by US drones. His brother was captured, interrogated and encouraged to “tell the Americans what they want to hear”: that they had in fact killed the right person. Reprieve has withheld identifying details of the family in question, making the story impossible to independently verify.

“President Obama needs to be straight with the American people about the human cost of this programme. If even his government doesn’t know who is filling the body bags every time a strike goes wrong, his claims that this is a precise programme look like nonsense, and the risk that it is in fact making us less safe looks all too real,” Gibson said.