Thanks to China, Christine Lagarde of the International Monetary Fund, Jim Yong Kim of the World Bank and Takehiko Nakao of the Asian Development Bank may no longer have much meaningful work to do. 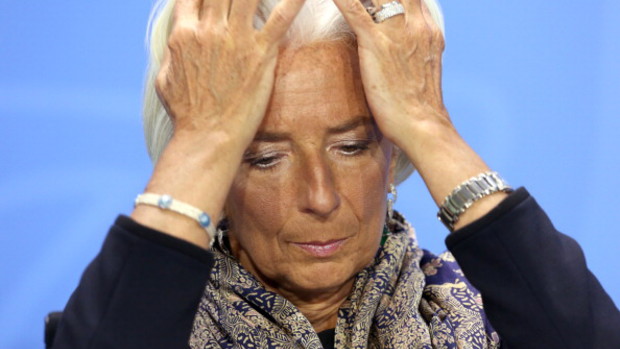 What work is left for the IMF?
Photographer: Adam Berry/Getty Images

Beijing’s move to bail out Russia, on top of its recent aid for Venezuela and Argentina, signals the death of the post-war Bretton Woods world. It’s also marks the beginning of the end for America’s linchpin role in the global economy and Japan’s influence in Asia.

What is China’s new Asian Infrastructure Investment Bank if not an ADB killer? If Japan, ADB’s main benefactor, won’t share the presidency with Asian peers, Beijing will just use its deep pockets to overpower it. Lagarde’s and Kim’s shops also are looking at a future in which crisis-wracked governments call Beijing before Washington.

China stepping up its role as lender of last resort upends an economic development game that’s been decades in the making. The IMF, World Bank and ADB are bloated, change-adverse institutions.  When Ukraine received a $17 billion IMF-led bailout this year it was about shoring up a geopolitically important economy, not geopolitical blackmail.

Chinese President Xi Jinping‘s government doesn’t care about upgrading economies, the health of tax regimes or central bank reserves. It cares about loyalty. The quid pro quo: For our generous assistance we expect your full support on everything from Taiwan to territorial disputes to deadening the West’s pesky focus on human rights.

This may sound hyperbolic; Russia, Argentina and Venezuela are already at odds with the U.S. and its allies. But what about Europe? In 2011 and 2012, it looked to Beijing to save euro bond markets through massive purchases. Expect more of this dynamic in 2015 should fresh turmoil hit the euro zone, at which time Beijing will expect European leaders to pull their diplomatic punches. What happens if the Federal Reserve’s tapering slams economies from India to Indonesia and governments look to China for help? Why would Cambodia, Laos or Vietnam bother with the IMF’s conditions when China writes big checks with few strings attached?

Beijing’s $24 billion currency swap program to help Russia is a sign of things to come. Russia, it’s often said, is too nuclear to fail. As Moscow weathers the worst crisis since the 1998 default, it’s tempting to view China as a good global citizen. But Beijing is just enabling President Vladimir Putin, who’s now under zero pressure to diversify his economy away from oil. The same goes for China’s $2.3 billion currency swap with Argentina and its $4 billion loan to Venezuela. In the Chinese century, bad behavior has its rewards.

If ever there were a time for President Barack Obama to accelerate his “pivot” to Asia it’s now. There’s plenty to worry about as China tosses money at rogue governments like Sudan and Zimbabwe. But there’s also lots at stake for Asia’s budding democracies. The so-called Washington consensus on economic policies isn’t perfect, but is Beijing’s model of autocratic state capitalism with scant press freedom really a better option? With China becoming Asia’s sugar daddy, the temptation in, say, Myanmar might be to avoid the difficult process of creating credible institutions to oversee the economy.

There could be a silver lining to China lavishing its nearly $4 trillion of currency reserves on crisis-plagued nations: It might force the IMF, World Bank and ADB to raise their games. Competition, as Lagarde, Kim and Nakao would agree, is a good thing. But more likely, China’s largess will encourage bad policy habits and impede development in ways that leave the global economy worse off.

William Pesek is a Bloomberg View columnist based in Tokyo and writes on economics, markets and politics throughout the Asia-Pacific region. His journalism awards include the 2010 Society of American Business Editors and Writers prize for commentary.

To contact the author on this story: William Pesek at wpesek@bloomberg.net

To contact the editor on this story: Mary Duenwald at mduenwald@bloomberg.net

One Response to “China Steps In as World’s New Bank”