Renaissance of the Indo-US Nuclear Deal

Jan 25 2015- The Obama-Modi dynamic has ushered in a new era in Indo-US foreign relations history. The last year had witnessed relations between the US and India plummet exponentially, with diplomatic strife and antipodean domestic and strategic interests taking the forefront. The new Indian government and Modi’s economic development agenda has led to a positive investor sentiment in the country with foreign investors being more bullish on the Indian market.

Both US and India are aware of this shifting trend and the vast potential for mutual economic gain.

In this regard, President Obama’s trip to India as the chief guest for India’s annual Republic Day celebrations is not merely a symbolic gesture, rather it reflects the tacit understanding between the two nations on the role they will be playing for each other in maneuvering the hegemonic shift in the geopolitical scenario.

For the US, India has emerged as the obvious option to act as a regional anchor for its Asia Pivot in an attempt to tackle burgeoning rise of “Sino-centrism” in the Asia-Pacific region, which may be in the interest of both nations.

Given this backdrop, the time is ripe for the two nations to deepen their economic engagement with the objective of establishing a formidable and long lasting strategic alliance. 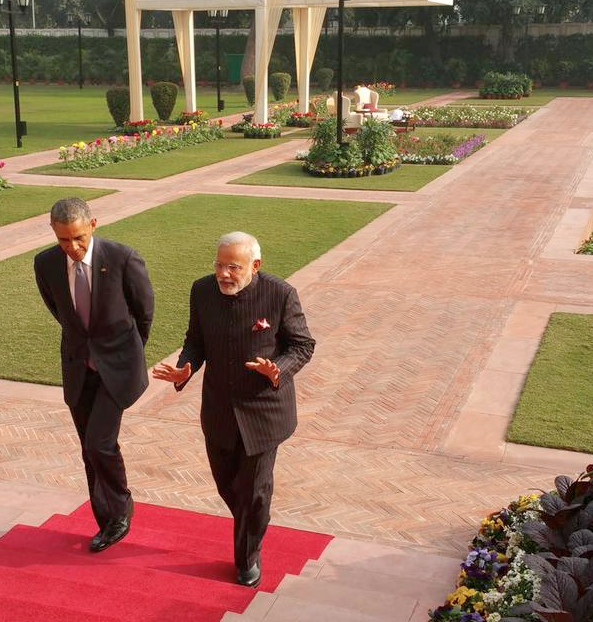 A key area for consolidation of economic ties is the Indo-US nuclear deal, which has been in cold storage since 2008 due to certain legal and regulatory obstacles relating to the compensation mechanism within the Indian law in the event of an accident.

India is the fourth largest emitter of green house gases in the world. Its commercial energy requirements are mainly sourced through fossil fuels. As per TERI reports, over 90% of India’s energy supply comes from the coal, oil and natural gas sector. Ever since the discussions on climate change assumed the world stage, India has actively tried to address its energy needs through utilization of clean energy. As of now, the clean energy sector is mostly reliant on its indigenous nuclear supply, and through solar power.

India’s surge in economic growth has created a sizeable appetite for electricity, which its extant utilities are unable to address efficiently.

India experiences frequent blackouts and the industrial hotspots are compelled to erect their own power plants to meet their energy needs.

From a climate change perspective, India also can’t be heavily reliant on its coal for her energy requirements. At present, India has roughly 4 gigawatts of her indigenous nuclear plants connected to the grid. In order to meet her climate goals, Indian planners have envisaged a nuclear supply that is slated to grow to 30 GW over the next generation.

However, such an ambitious target can only be met if India has access to advanced nuclear technologies and fuels, which have been offered under the proposed nuclear deal. It may be added here, that a successful deal can create an increase in the nuclear generating capacity nearly ten-fold. This is despite the revised goal of providing 27.3 GW capacity by 2032 in place of the originally envisaged 63 GW.

As mentioned above, the only cloud in the silver lining comes in the form of a legislation, The Civil Liability for Nuclear Damage Act (CNLD Act).

In particular, the provisions related to recourse liability on suppliers and concurrent liabilities under other laws create a very complex scenario, which has thwarted the US civil nuclear suppliers from giving their assent to concerned nuclear deal.

The provision on recourse liability essentially allows an operator to recover damages from nuclear suppliers in the event of a nuclear accident, which may be a result of defective or substandard equipment.

It must be noted here, as argued by Arghya Sengupta and Anupama Sen from the Vidhi Centre for Legal Policy and Oxford Institute for Energy Studies respectively, this provision is in contravention to international norms found under Article 10 of the Annex to the Convention on Supplementary Compensation for Nuclear Damage (CSC), of which India is a signatory.

The provision is, however, reflective of India’s experience with establishing liability for industrial disasters such as the Bhopal Gas Tragedy and the catastrophe that a nuclear disaster may unleash as witnessed during the Fukushima accident in recent history.

Thus, while India may be violating international norms, it has merits in her argument for inclusion of such a clause. India can maneuver the treaty obligations by putting in place certain reservations to the CSC but that won’t be enough to address the logjam over the Indo-US Nuclear Deal.

Another burning issue relates to the calculation of damages to be borne by the nuclear suppliers.

The Rules under the CNLD Act stipulate that liability for any supplier shall extend to the tune of 250 million Dollars.

If government sources are to be believed, the deal that is being finalized is looking towards setting up insurance pools for indemnification of suppliers who have won contracts for construction of reactors.

This may be a possible method to maneuver the law, which as per the text, may require all suppliers to be insured upto the aforementioned value.

A carve-out of this nature will prevent insurance costs from being vertically layered and allow insurers, operators and states to share the risks of any accident, thereby offering a much wider pool for compensation.

Nevertheless, this may be a temporary solution and the Indian government should attempt to generate political will for bringing these measures within the scheme of the Act.

The Act in its current form also suffers from interpretative gaps, as there is no clear definition on the various types of accidents that may constitute nuclear damage and allows liability claims under tort law principles of strict and absolute liability.

Thus, the deal as being discussed currently will only be a temporary solution to an otherwise complex scenario. In this regard, if India is serious in her approach for deepening strategic ties with the US, it must attempt to formulate a predictable and fair legal and regulatory regime relating to nuclear supply, which would also be in her national interest.

Rachit Ranjan is a Policy Analyst at Oval Observer Foundation.