Mark Hackard – The Soul of the East

Geopolitical analysis, the art of explaining power relationships through the prism of impersonal geography, can be a helpful tool for observers of the Great Game – but it also has its limitations. A case in point is the renewed US-Russia confrontation. Think tanks and policy insiders easily sell the narrative that from the dark days of the Cold War to our own time, Russia and the United States are fated to play in a zero-sum contest for the future of Eurasia and the world. Deterministic theories, though, can be used to legitimize predatory policy, and pseudo-scientific formulae often conceal manipulations by parasitic elites. Scoring a fortune off human misery and mass death, plundering economic assets, and shaping entire societies in one’s own image all find justification in claims of historical inevitability and the necessity of “progress.”

While Russia and the United States can easily be cast as eternal enemies in the manner of Rome and Carthage, or Ivan Drago and Rocky Balboa for modern audiences, we should recall that the two states were originally allies. From the time of 1776, Russo-American friendship was a contributor to the peace and security of both nations for nearly a century and a half. Catherine the Great shrewdly supported the independence of the American colonists, who were able to mount a successful rebellion against an exploitative oligarchy acting through the British Crown. In the terrible cauldron of the US Civil War, Tsar Alexander II, liberator of the peasantry, sent his fleet to America’s Atlantic and Pacific coasts to deter British and French intervention schemes. 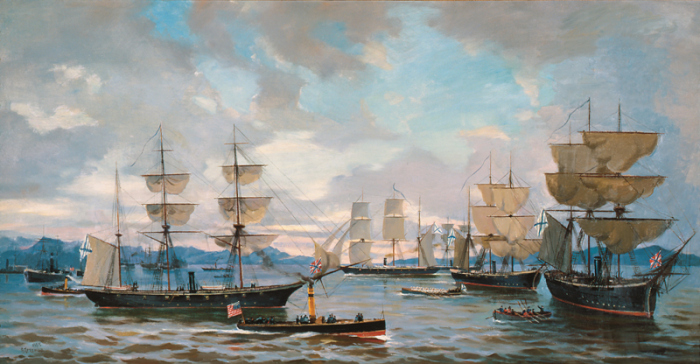 In Realpolitik, where expediency is the order of the day, alliances are defined by a common adversary. For both Russia and the United States, that adversary was not simply another nation-state like England or France, but a financial international bent on controlling the world through elaborate fraud, war, and revolution. Banking dynasties under names like Rothschild, and later Morgan, Warburg, and Rockefeller, had ascended to power in the West from the seventeenth century onward. Their planned global imperium of borderless labor and capital flows, today promoted as the Open Society by billionaire speculators such as George Soros, was already entering its initial stages of implementation. Thus the fledgling American Republic, an Enlightenment project but not yet under bankster domination, and Imperial Russia could unite for the freedom of their peoples and against the assaults of the Money Power.

What changed? In the early twentieth century the masters of usury struck back decisively against the United States and Russia, by stealth in the former case and an outright coup d’état in the latter. Through various machinations, the privately-run Federal Reserve Bank was established in 1913 to issue the US currency at interest, suborning institutions of government and crushing Americans with a national debt now counted in unfathomable trillions. The Great War was unleashed upon Europe in a nightmarish conflagration, and in 1917 the Russian Revolution, funded by the banking houses of London and Wall Street, installed a vicious Bolshevik regime – dependent on Western credit for the whole of its existence. As for the rest of the twentieth century, we witness globalist plutocrats’ use of dialectics, wielding ideologies as weapons and pitting nation against nation, in the Hegelian procession toward the World State. 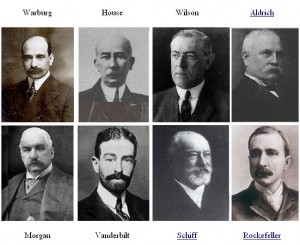 Most influential banking families in the USA. These 8 families (sometimes nicknamed Rothschild’s agents) also started The Federal Reserve in 1913.

Today the realization of that Novus Ordo Seclorum draws ever nearer. And as its grand strategist emeritus Zbigniew Brzezinski makes clear, Washington’s “indispensability” marks only a period of transition:

In the long run, global politics are bound to become increasingly uncongenial to the concentration of hegemonic power in the hands of a single state. Hence, America is not only the first, as well as the only, truly global superpower, but is also likely to be the very last.

Brzezinski artfully neglects mention of what is intended to supersede American unipolarity: planetary tyranny, a system of total population control and resource extraction. Moreover, all of this is being constructed in the name of “liberty” and “equality,” abstractions serving as mere rhetorical cover for a demonic will to power. It is the liberal program of the oligarchs that has erected an all-pervasive surveillance grid unprecedented in scope, and it is their program that aims to rob man of his faith, family, and heritage, abolishing all that makes him truly human. In the novel The Possessed, Fyodor Dostoevsky articulated this drive with prophetic pathos through his utopian theorist Shigalev, who “proceeding from limitless freedom,” would “bring about an unlimited despotism.” Pyotr Verkhovensky, the leader of the story’s revolutionary cell, exults:

To level the mountains is a good notion, not a ridiculous one. I’m for Shigalev! We don’t need education, enough of knowledge! There will be enough material for a thousand years, but obedience must be arranged. There’s too little of one thing in the world: obedience. The wish for education is already an aristocratic wish. A little bit of family or love, and you have a desire for property. We will kill the desire: we’ll unleash drunkenness, scandal, denunciation; we’ll unleash unheard-of deviance; any genius we’ll extinguish in infancy. All toward one denominator: total equality… The slaves must have rulers. Total obedience, total impersonality, but once every thirty years Shigalev will set off a spasm, and everyone will begin to eat each other to a certain point, just so that everything’s not boring.

Behind every effective revolutionary stands the financier who created him. Equality to the slaves, an equality of the graveyard, and to the moneyed elite – godlike power over the Cosmos. In exchange for ever more “inherent rights” and meaningless depraved spectacle, socially-engineered mass man forfeits his freedom and his soul. With the West conquered, now all of humanity is set for standardization through postmodern colonialism, covert-action NGOs, carrier battle groups, and killer drones. Any sovereign state resisting the march of progress must be destroyed.

At the Cold War’s end, a defunct Soviet Union was supposed to fold into the world controllers’ planned capitalist-communist synthesis, and minor “rogues” like Yugoslavia, Iraq, and Libya could be dismembered with impunity in the meantime. From the chaos, destitution, and demoralization of the post-collapse period, however, another Russia has slowly re-emerged, its people broadly nationalist and increasingly unashamed of their thousand-year ancestral faith, Orthodox Christianity[I]. Nothing could be more intolerable to the robber-baron superclass, who have already for the past century waged ruthless war against religion and organic cultural identity in the United States, Europe, and elsewhere to impose their desolating vision upon mankind.

Another round of US-Russia tensions might be unfolding, but such a clash was neither foreordained nor inevitable; between the two largely distant lands there is mutual nuclear deterrence and an absence of directly conflicting vital interests. Beyond inane sloganeering about democracy and human rights, more sophisticated Western strategists can cite new iterations of Halford Mackinder’s Heartland thesis or the latest Eurasian pipeline maneuvers as reasons to “contain” Russia. None of this accounts for a cosmopolitan oligarchy that sets policy, subsidizes scholarship, and manufactures consent in pursuit of its totalitarian agenda. In their quest to liquidate the American, the Russian, and every other unique people, the predators from the bankster international consider themselves above all laws human and divine. Yet the swelling arrogance of sociopaths brings about their downfall – and the sooner their crime spree comes to an end, the better chance we all might have for peace and reconciliation.

[I] It should be noted that even Russia is still not free of the banksters in its own state apparatus, with the Central Bank and the Medvedev government under the influence of pro-Western liberal technocrats familiar with Putin from his days in St. Petersburg. With economic warfare waged by the international a present-day reality, it would be reasonable to expect a quick resolution to this problem in the near future.

One Response to “The Bankster International”