Britain and Canada Involved in Foiled US Venezuelan Coup Plot 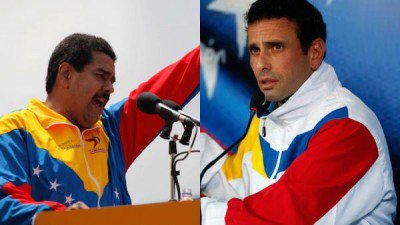 16 Feb 2015 – Britain and Canada were co-conspirators in the latest plot to topple Venezuela’s government.

Titled “A Call on Venezuelans for a National Accord for the Transition,” it promoted regime change. Called for Venezuela to be handed back to monied interests.

“(T)he Maduro government has entered a terminal phase.” Claimed it’s “the duty of every democrat to help resolve the current crisis, to defend freedom…to make the transition…(to restore) democratic order.”

“Many of the individuals being charged, included a military general – whom has confessed to participating in the plans – and a retired lieutenant colonel – have indicated you (fascist Justice Party president Julio Borges) as being a key participant in meetings, which resulted in the decision to carry out a series of bombing attacks as a part of the coup, targeting the Presidential Palace, the National Assembly,” key ministries, TeleSUR’s offices, and other Caracas sites.

They sought information on airport capabilities in case needed in an emergency.

Computers seized had detailed coup plans, including maps showing targets to be bombed.

A video showed military officials announcing Maduro’s government no longer was recognized. It was scheduled to be aired after planned bombings were launched. Either by a Venezuelan or Miami TV station.

Cabello showed a 10-year visa given to one of the plotters days ahead of the planned coup.

He noted Obama’s recent statement about “American leadership at times entail(ing) twisting the arms of states which don’t do what we need them to do.”

US planned, funded, implemented and directed economic, political, and street warfare continues to topple the hemisphere’s most vibrant democracy.

On Saturday, Maduro addressed Venezuelans a second time on national television. Following up on his Thursday coup plot revelations.

Explaining more details of Washington’s scheme to oust him forcefully. “Almost all (opposition) leaders knew about this plan, this ambush, almost all of them, including the four-time losing candidate,” Maduro explained.

Referring to Henrique Capriles Radonski. One of many Venezuelan fascists wanting power back the old-fashioned way.

“I’m not saying all of them were actively involved,” Maduro said. “But it was a rumor circulating amongst them, that something was about to happen.

“In your name, they are organizing coup plots against (Venezuela’s) democratically elected government…”

Bolivian President Evo Morales expressed solidarity with Maduro saying “(w)e all have the obligation to enforce respect for democracy and elections, and if we have a clear conscious, not even the empire can defeat us.”

Maduro received numerous other messages of support. Nicaraguan President Daniel Ortega condemned the “criminal and futile attempts of the empire to undermine the Bolivarian Revolution.”

From Mexico City, the Network of Intellectuals, Artists and Social Movements in Defense of Humanity expressed solidarity in an official statement. It condemned plans to topple Venezuela’s government.

Venezuelan opposition spokesman Jesus Torrealba lied saying “(t)he government makes up these stories about coups to avoid talking about how the country is breaking down.”

“Political transitions must be democratic, constitutional, peaceful, and legal.”

Stephen Lendman lives in Chicago. He can be reached at  lendmanstephen@sbcglobal.net. His new book as editor and contributor is titled “Flashpoint in Ukraine: US Drive for Hegemony Risks WW III.” http://www.claritypress.com/LendmanIII.html Visit his blog site at sjlendman.blogspot.com.