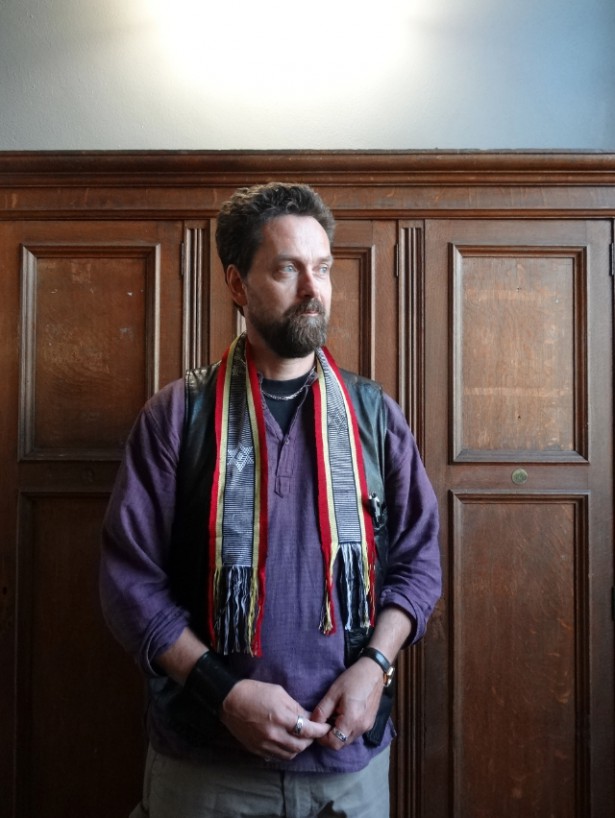 With parents who were Gandhian vegetarians and a grandfather who was sent to military prison during World War II for helping Jews enter Sweden, Stellan Vinthagen has nonviolent resistance in his blood.

In 1980, at the age of 16, Vinthagen was part of a campaign against nuclear power plants in Sweden. He also participated in the Plowshares movement, and in 1998 was arrested along with several others as they attempted to disarm the United Kingdom’s Trident nuclear submarine with hammers and bolt-cutters.  Twice, in 2007, he was arrested and held overnight for participating in Academic Seminar Blockades of the nuclear submarine base in Faslane, Scotland, along with over 70 other academics. Most recently, Vinthagen was among those who organized Sweden’s Ship to Gaza in 2012, which led to his detention in Israel.

Aside from his activism, Vinthagen has been an educator in conflict transformation and civil disobedience since 1986, and has authored or co-authored seven books. This fall, Vinthagen was appointed to serve as the Inaugural Endowed Chair in the Study of Nonviolent Direct Action and Civil Resistance at the University of Massachusetts Amherst. I recently had a chance to speak with the longtime activist and educator about his new position, which is a first in the field of civil resistance.

Please tell us about your new position at the University of Massachusetts Amherst.

Perhaps never before has a professorship existed that was devoted to the knowledge of nonviolent action and civil resistance. It is also unique because the university sought a professor who is working with activists. So, the knowledge produced is also supposed to be knowledge that activists can use.

A position like this means that nonviolent action and its knowledge is being more widely recognized today, as well as being used across different fields to understand why popular movements that apply unarmed means are so powerful and effective. At the same time, this means recognizing that there are some recurrent problems in movements, as we have seen in Egypt, Ukraine and elsewhere. So there is a need to understand what works and what doesn’t.

What were the problems in the recent peoples’ uprisings in the Arab world?

The developments within the revolutions were taking place so suddenly that there wasn’t a coordinated strategy or a clear idea of what kind of society is desired, besides getting rid of the dictator. Another problem was also the recreation of power in the liberation process. I don’t want to deny that the Muslim Brotherhood was participating in the struggle against Mubarak. But when they came to power, they recreated patriarchal structures and exclusions, and they were not interested in creating new systems of inclusion or formulating a new constitution for Egypt.

Alliances are often created by what revolutions are against. Some individuals or groups might have some developed ideas of what they want, but it is not a united front. And it is a problem because a regime change is not touching the power structures of some institutions of society, but only touching the top level. So it gives you the opportunity to do something, but if you are not aware of how the whole society is still living a lie, one can easily be manipulated and used.

There will be certain opportunists within the movement who will take this chance for personal gains, which can bring down the revolution. So there is a need for that kind of research. We have to go back and visit the ideas of people like Gandhi, who had the idea of a constructive program. We have to find a way of doing resistance, where we are also building up alternatives at the same time. For instance, if you oppose genetically modified food, you also have to develop seed banks.

What was the selection process like for such a position?

The position sought someone with a good academic record and activist experience. My activist experience was very explicit. I am an anti-imperialist and see the United States as a major part of the problems in the world. So my civil resistance work is public and has largely been against U.S. interests.

At the same time, the area of Massachusetts is very unusual in the United States — it is very open to rather radical approaches. I never felt that my political activism was a problem, but rather I found it as an asset for the first time.

The people who are specialized in the understanding of civil resistance among activists or academia are few across the world, and if we really want to increase and raise the quality of this field of knowledge, I would need to network and travel. I have received two generous annual budgets to travel.

What is the nature of the endowment of this position?

The endowment of $2.8 million is coming from a Quaker family with an activist background against the Vietnam war and within the civil rights movement. So they recognized the need for such activist-oriented research.

The endowment is supposed to be sustainable, because it would be invested in stock markets, as is done by many other universities. But I told the university that if I am successful with my civil resistance work, then the stock market will fall. We will see what happens.

What is the significance of such a position in the global framework of movements across the world in recent times?

Personally, I find it strange that it has taken so long to establish the importance of this field. We have seen a dramatic number of military dictatorships overthrown — Latin America in the 80s, the fall of the Berlin Wall and others. But it seems that the recent movements in the Arab world are what [awakened] people to the need to know more about nonviolent action.

Powerful positions are showing interest in this field. The Pentagon issued a press release, thus making it public that it wants to fund research in this area as well. But, of course, its research is aimed towards learning how it can control movements for the benefit of U.S. interests.

What are your plans while you serve this position?

I think there is a need to build a bridge between activists and academics, and similarly between academics specialized in this field of nonviolent direct action and academics in other fields that work on similar themes, but may not be aware of such concepts. I see the possibility of linking up feminist and queer studies, with revolution studies, social movement studies, a number of post-colonial studies, subaltern studies and so on. I think there is a lot to contribute to make our understanding of nonviolent direct action much more sophisticated.

This field has been dominated by the works of Gene Sharp and his contribution is fundamental. But he has little understanding of gender, class, context, cultures, structures. So many of those dynamics are lacking in the field.

At the same time, there is so much knowledge among activists, but very little dissemination takes place because activists are too preoccupied to survive and struggle with limited resources. There is a great need to document and analyze in a formal, research-oriented way. As a result, many academics are working in isolation because they may have been activists before and are not continuing activism, or they are caught up by the funding processes for their research, etc. So this is a fundamental problem to bridge. One way to deal with this, I feel, is to try to find different topics where there is need for research and where there is need for activists to share their knowledge.

How will you be able to bridge such gaps?

One example: We have witnessed the fall of dictatorships in recent times, but if you look at the occupations in Palestine, Western Sahara, West Papua, Kashmir or Tibet, then it seems to be much more difficult. So one idea is to bring people together from these areas; they would have an active interest in sharing knowledge with each other. So, it will be a South-South collaboration of sharing knowledge and experiences.

I was recently attending the International Studies Association conference in Toronto and there was a fantastic panel, wherein indigenous people were presenting academic papers on indigenous resistance. I felt that that was an opening to work together, and that kind of occupation of culture, existence, history — of a people that has happened and is still happening — is so different. Yet, at the same time, if we can bring together people from different areas they will have similar profound experiences.

If you had a classroom of activists, what would you tell them is the single biggest challenge to movements that prevent them from reaching their goal?

It is tough to pinpoint one thing that cripples movements. Perhaps, it is resistance that is not coupled with the building of a new society simultaneously. Or the monopolization of leadership among smaller groups of people, particularly urban middle class alliances, thereby preventing the effective dissemination of knowledge and experiences among affected communities. A third challenge is in forging social alliances between classes and castes and different regions. In recent times, the movements in Europe have been about one class or one gender, and I believe that one of the key elements to having the capacity to transform society is to forge broader social alliances in the struggle itself. Movements need to understand the different forms of repression and the need to treat them all seriously and equally. The idea that democracy or equality between genders can be worked upon later is a fundamentally flawed idea. If you see movements that are allowing leaders to be corrupt during the struggle, why should you be surprised that the new government and the society thereafter is mired with corruption?

Priyanka Borpujari is an independent journalist from Mumbai, India. From September 2012 to April 2013, she was based in Boston and New York after being selected as the IWMF Elizabeth Neuffer Fellow 2012-2013. Her blog is www.priyanka-borpujari.blogspot.com

One Response to “Meet Stellan Vinthagen, Head of the First University Program on Civil Resistance”