The country’s Rohingya minority is one of the most persecuted groups in the world. 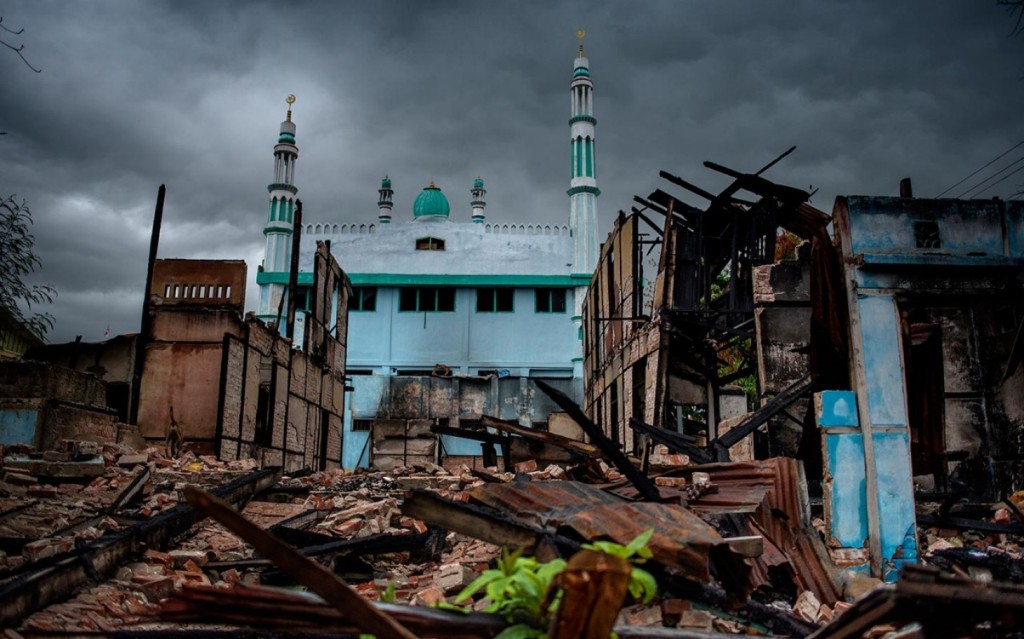 18 Feb 2015 – On Feb. 11, Myanmar’s President Thein Sein rescinded a voting rights offer to the country’s Rohingya community amid intense pressure from far-right Buddhist groups. Last week hundreds of Buddhists took to the streets to denounce the continuation of a 2010 law that extended the right to vote to the country’s more than 1 million ethnic Rohingya. Myanmar does not regard the minority group as citizens.

The violence directed toward the Muslim Rohingya community has been characterized in the media as Buddhism’s terrorism problem. However, the faith-based portrayal of the Rohingya crisis devalues the political and social nuances necessary to understanding the conflict.

The Rohingya are one of the most persecuted groups in the world. Stripped of citizenship in the 1980s, the Rohingya have been a subject of frequent racist propaganda and blistering violence. For years numerous human rights organizations have documented the persecution of the Rohingya in Myanmar’s northern Rakhine state. The community continues to live under constant threats, with few legal rights.

The campaign against the Rohingya and Muslims in Myanmar is spearheaded by controversial monk Ashin Wirathu. Once referred to as the “Burmese bin Laden,” he is the leader of an ultranationalist group called 969, which opposes the growth of Islam in Myanmar. He was jailed in 2003 for inciting hatred and stirring sectarian clashes and released in 2010.

Wirathu has warned against an impending Muslim takeover of Myanmar. In 2012 the rape of a Buddhist woman in northern Rakhine led to violent attacks that left dozens of civilians dead and more than 125,000 Rohingya and other Muslims displaced. Human Rights Watch described the humanitarian crisis as “ethnic cleansing.”

Myanmar’s government and local authorities have long been complicit in the violence against the Rohingya and other minority groups. “Burmese officials, community leaders and Buddhist monks organized and encouraged ethnic Arakanese backed by state security forces to conduct coordinated attacks on Muslim neighborhoods and villages in October 2012 to terrorize and forcibly relocate the population,” HRW said in a detailed report in 2013. “Included in the death toll were 28 children who were hacked to death, including 13 under age 5. ”

Wirathu justified the violence saying the Rohingya were planning to establish an Islamic state in Rakhine. He has since urged non-Muslims to boycott Muslim shops and avoid doing business with Muslims. “Your purchases spent in their shops will benefit the enemy,” Wirathu said in a 2013 YouTube video. “So do business with only shops with 969 signs.”

The Rohingya-Buddhist conflict in Rakhine dates to the 17th century. The animosity between Muslims and Buddhists in western Myanmar has roots in a history of successive invasions by the British and Muslims. “Rakhine identity … has been partially built around a feeling of being besieged (and conquered) by Muslim kingdoms to the west and Burman (Buddhist but ethnically different) kingdoms to the east,” according to Oxford University researcher Matthew J. Walton.

Walton is not alone in highlighting the political nature of this conflict. “It’s more about politics,” former United Nations Ambassador Nyunt Maung Shein said of the conflict in 2013. “It is not due to a crisis of religion … It is a political play, not due to the discrimination and religion.”

In 1982 authorities in Myanmar stripped the Rohingya of Burmese nationality under the country’s Citizenship Law, often referring to them as “resident foreigners” and “Bengalis.” The move was part of the ruling elite’s xenophobic refusal to recognize other ethnicities, including ethnic Chinese minorities. Ironically, Gen. Ne Win’s government, which promulgated the law, was famous for its socialist program and lack of clear interest in promoting the edicts of Buddhism. Meanwhile, the lack of international spotlight has allowed radical monks such as Wirathu to legitimize their vitriolic rhetoric, ethnic cleansing and massacres against Rohingya.

The negligence and blatant collusion of the Burmese state and its policies is far more problematic than demonization campaigns by ultra-Buddhist nationalist groups. The existence of contentious legislation such as the Citizenship Law means the Rohingya will continue to remain stateless, with few to no legal rights.

Over the last few years, entire villages inhibited by Rohingya Muslims have been razed or forcibly displaced. Amid the coverage of conflicts in Syria, Nigeria and Ukraine, the Rohingya crisis has received scant mainstream media attention. Myanmar’s opposition leader and democracy icon Aung San Suu Kyi has been mum on the issue, perhaps deterred by the growing tensions between the majority Buddhist population and the minority Muslim community.

Similarly, President Barack Obama, who has visited the country twice in the last seven years, has been meek in his response, refusing to openly condemn Myanmar’s failure to end the violence.

“Discrimination against a Rohingya or any other religious minority … does not express the kind of country that Burma over the long term wants to be,” Obama said during a trip to Myanmar last year. His use of the word Rohingya was considered a bold gesture and resulted in street protests there.

Minority radical monks have used Buddhism to promote violence against the Rohingya. However, not all Buddhists are promoting religious intolerance. For example, the Dalai Lama has unequivocally condemned extremist monks such as Wirathu and Myanmar’s leaders for failing to end the attacks against Muslims. Besides, a closer look at the Rohingya crisis reveals a checkered and complicated history that goes beyond a religious spat.

Burmese activists and leaders such as Suu Kyi must stand up for the human rights of the Rohingya community. In the face of such travesties, the international community must also break its silence and pressure Thein Sein to protect religious and ethnic minorities in Myanmar.

Usaid Siddiqui is a Canadian-based freelance writer. He has written for PolicyMic, Aslan Media and Mondoweiss on current affairs.